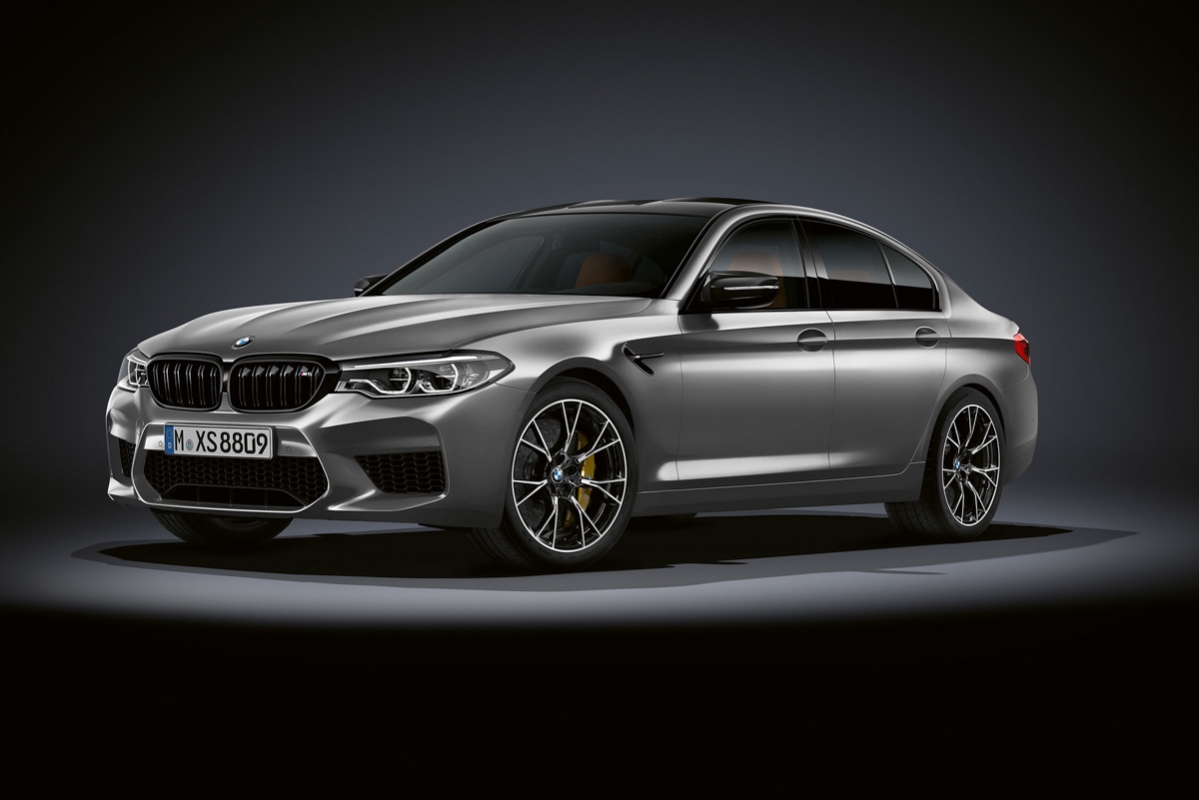 Image 1 of 11
BMW has revealed an even more powerful version of its all-wheel-drive, V8-powered supersaloon. The new BMW M5 Competition gets 24bhp more power than the regular model, increasing the total output to 616bhp, as well as a sharper chassis and a menacing new look.

Rather than being an M5 with a Competition Pack added, BMW wants us to think of the new version as being more akin to the recently unveiled M2 Competition. So, instead of having a pack tagged on from the options list to bump the power up and sharpen the chassis, the M5 Competition is positioned as an entirely new model in its own right. As a result, the Competition is priced from $130,285, around $8,800 more than a standard M5, and nearly $11k more than arch-rival Mercedes-AMG E63 S.

Don’t think, however, that the M5 Competition gets an entirely new engine, like the M2 Competition it gains a series of tweaks to acheive the more hardcore effect BMW was looking for.

Featuring the same basic 4.4-litre twin-turbo hot-vee V8 engine as the regular M5, the Competition model makes 616bhp at 6000rpm. Torque remains at 553lb ft, however the Competition’s peak output is available from 1800 to 5800rpm – a 200rpm wider band.
The regular M5 is just a fraction less powerful than its Mercedes-AMG rival, the E63 S. The output of the new M5 Competition trumps the AMG’s 604bhp, putting it at the front of the insane supersaloon power race.
The M5 Competition beats the Merc from 0 to 100kph, too, completing the dash in 3.3sec, just 0.1sec ahead of the AMG. Like the E63 S and the regular M5, the Competition is predominantly four-wheel drive, which helps explain its ludicrously fast acceleration time, but can also run in rear-wheel-drive-only too.
Rather than just being faster in a straight line, the M5 Competition has become slightly more aggressive and more agile. The engine mounts have been made significantly stiffer, going from a spring rate of 580N/mm to 900N/mm. This helps make the front axle react more quickly on turn-in and helps reduce weight transfer.
There have been tweaks to the chassis, too. The body sits 7mm lower on ten per cent stiffer main springs, while the auxiliary springs are shorter to help the suspension react more promptly. The anti-roll bar at the rear is also firmer, while the front has entirely new mounts.
The front axle geometry has been altered, too; there’s a greater amount of negative camber. Meanwhile, the rubber bushes in the rear toe-links have been exchanged for ball joints.

The results of the chassis and engine mount changes are said to be a firmer ride and more engine noise in the cabin. The latter is boosted further by a new exhaust, too. The standard M Sport exhaust uses a flap to control the noise depending on which mode the engine is set to. There’s also an M Sound Control button that, no matter what the engine mode, allows you to select the quietest exhaust setting.
The tailpipes of the M5 Competition’s new exhaust are finished in gloss black metal, matching the new door mirrors, the side vents, window surrounds, B-pillar trim, kidney grilles, and rear spoiler, as well as the M5 badge and Competition lettering on the back. An additional M5 Competition badge down the sill is optional.
The only other exterior change is a set of new 20-inch wheels. They’re the same size as the regular M5’s rims, but are in a lighter, forged Y-spoke design.

Inside, the changes are minimal. The blue, red and purple of BMW’s M logo are woven into the seatbelts in three thin stripes, while the floor mats have an M5 logo embroidered onto them.
The M5 Competition isn’t as radically different from the base model as, say, the M2 Competition is, but the big saloon hardly needed a considerably more powerful engine anyway. The chassis changes, however, promise to make the big BMW more focussed and, potentially, even more enjoyable.
This article originally appeared at evo.co.uk
Copyright © evo UK, Dennis Publishing