We cannot display this galleryBentley has revealed the quirkily styled EXP 12 Speed 6e Concept at the Geneva Motor Show, an all-electric concept that potentially previews a future luxury EV for the brand.

Curiously, no details have been released concerning the electric powertrain, though many have speculated that a production version of the EXP 12 Speed 6e Concept may use the same running gear as the Mission E from sister brand Porsche. Capable of producing 592bhp (sent to all four-wheels) and boasting a 3.5 second 0-100kph time, the hybrid drivetrain is expected to feature fast-charging technology too, plausible via the socket hidden behind the rear number plate. Exact specifications on any future Bentley EVs though are unlikely to emerge before the planned plug-in hybrid Bentayga in 2018.

If the EXP 12 Speed 6e Concept looks familiar, that might be because the two-seater roadster is based on the EXP10 Speed6 that debuted at the same event two years ago. Like its hard-top counterpart, the EXP 12 features a ‘6’ prominently showcased in mesh of the front radiator, a nod to a similar design used by pre-war racing Bentleys. The twin headlights and large alloy wheels also mirror the EXP10, although – like the Mercedes-AMG GT Concept – Bentley has foregone wing mirrors in favour of external cameras. Another design flairs of note include the deep grooves in the doors, the vented bonnet, and, of course, the drop top roof itself.

The interior design meanwhile emphasizes a focus on comfort rather than performance with the EXP 12. The centre console – made entirely from glass just FYI – folds elegantly into the touchscreen in the dashboard. The cutaway steering wheel meanwhile (yes, we like that) features two buttons, one for a boost in performance (rather like Porsche’s Dynamic Boost) and another to limit the power for use around town. Glass panels on the spokes meanwhile offer additional connectivity to the infotainment system, while the upholstery is a typically dashing display of two-tone red and cream for Bentley.

You can check out more Bentley features HERE, and more Geneva articles HERE 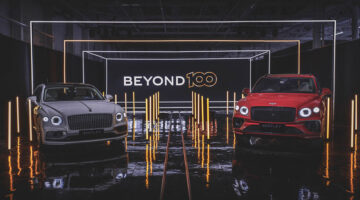