Behind the lens with Matt Magnino

Those who know the work of Matt Magnino will be more than familiar with a Lamborghini Miura speeding through a tunnel, or the Indy 500 field screaming past the start/finish gantry. Dramatic as these images might sound, the American shoots to capture one thing and one things only: ‘bedroom posters’.

An automotive photographer for four years now, his list of clients includes the likes of KVSH Racing, SH Rallycross, Zima Motorsports, Modified magazine and Honda Tuning magazine (These magazines don’t run anymore after the publisher went down), but it’s perhaps Matt’s experience being a part of the 2013 Indianapolis 500 winning team with driver Tony Kanaan, and his full-time venture with 4-time IndyCar Champion Sebastien Bourdais and Ex-Formula 1 Pilot Nelson Piquet Jr. that raises the most eyebrows. As you can imagine, there is more than meets the eye when it comes to this talented artist as we find out Behind the Lens with Matt Magnino. 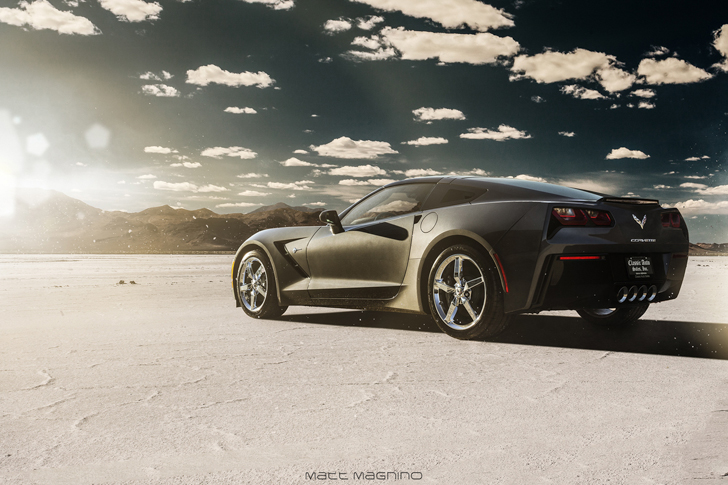 We’ll kick off this interview with the most clichéd but most important question: how did you become such awesome photographer? Where did this all begin?

“Ha, I appreciate the kind words! But actually, compared to the people I look up to, ‘awesome’ is far from it. I began shooting for fun a few years ago and never really had a plan to take it anywhere. I picked up my first camera – a Nikon D60 – during my junior year of high school, so that would have been six or seven years ago. After that I just found any chance I could to take pictures.”

So was this an interest in photography in particular or specifically cars?

“Actually my focus on cars came from being around the culture and being part of the community in Chicago. I began shooting for local blogs like JDM Chicago and Canibeat” – my my, their tagline looks familiar! [Ed.] – “and it started to snowball from there. My good friend and fellow automotive photographer Jeremy Cliff and I started shooting together about four years ago, and we have pretty much grown together and helped each other on 90 percent of each other’s shoots. It is super awesome to have someone like that to work with!” 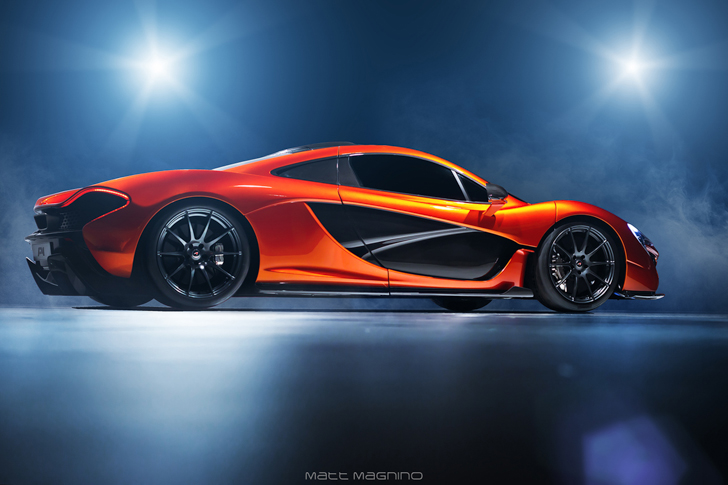 How do you visualize your frames? Do you just get into the scene, set your camera and improvise, or are you a man with a plan?

“[Pause]… I would like to say I that I am a man with a plan but nine times out of ten, it turns into last minute improvising and having to do things on the fly. Before I get to a shoot I will brainstorm different concepts and setups in my head, but nothing is ever set in stone.”

You’re telling us! A photoshoot we had with the Ford Raptor still haunts us to this day, but that’s a story for another time…

“[Laughs] Yep, there are so many variables that come into play, it is difficult to follow through with the plan step-by-step. When it comes to doing some of the race car shoots for instance, we are super limited to time and location that it becomes a case of ‘shoot it where it stands and do the rest of the work behind the computer’. You take what you have and make it work.” 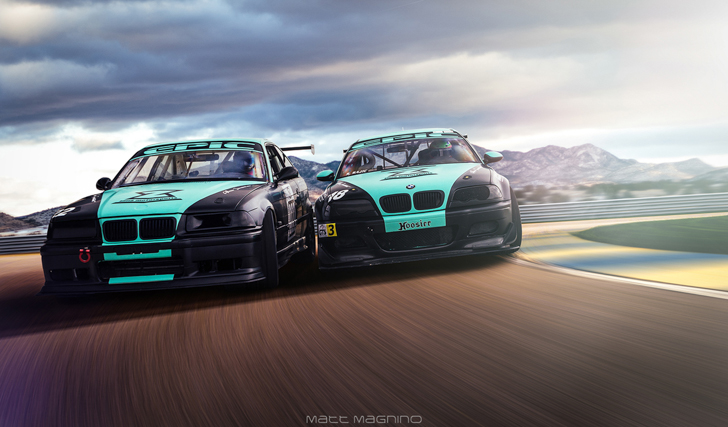 Glad you mentioned your racecar photography. ‘Dramatic’ is the word that springs to mind when we look at your images, since they’re quite reminiscent of the 1960’s/1970’s racing posters…

“I’ve always had a huge passion for motorsports photography, but truthfully I could never construct images that truly excited me from on-track. I mean, I’d always looked up to guys like Nate Hassler and Alex Wong, who make these amazing motorsports images, but could never find the right shot on my own. On the flip side I absolutely love the feeling of commercial automotive work (everything about it blows my mind). So I started to think and think. How could I combine the two concepts together? I had seen it done before with some of the Formula 1 teams but hadn’t seen anything like it in IndyCar. I really wanted to give it a shot.”

So does the ‘look’ of your work comes from framing or the post-production?

“Actually a lot of the work relies heavily on post-processing, yes. Depending on the circumstance, we don’t have access to get the cars on-track or the time we do have is extremely limited. So I’m usually forced to work with what I have. I want to make images that people remember and blow them away, so I try to add a lot of elements to create an environment that brings the viewer into the scene.” 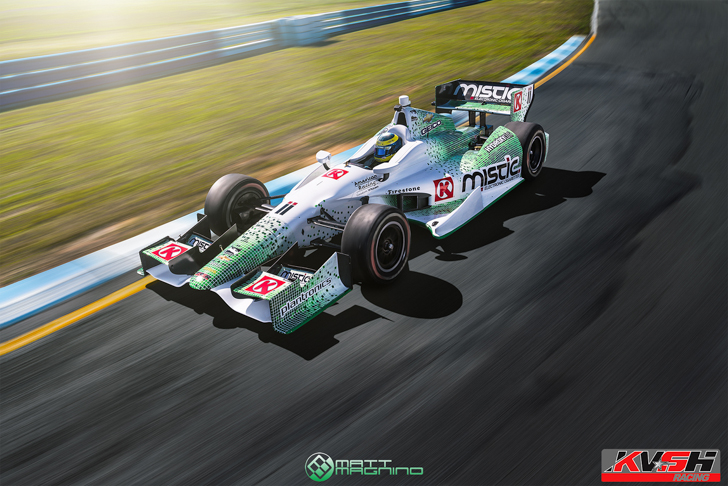 Give us an idea of what’s in your camera bag then. What’s your weapon of choice…

“To tell you the truth – and I share this because I am not ashamed of it – but I really don’t own any gear aside from a tripod, a 13in Macbook Pro, and an LED light. When I have a shoot, I just borrow and rent what I need. A recent financial situation put me in a dangerous spot that required me to sell my camera and pretty much all the gear I had. My recent setup was a Canon 7D that I would normally pair up with the Canon 24-70 2.8 or Canon 17-40, and sometimes the infamous Canon 50mm 1.8. Every image in my portfolio was done with some variation of this setup. I will have a Sony in my gear bag very soon though, since I’m waiting to see this new A7R successor.”

So, a photographer without a camera? Don’t think we’ve had that on Behind the Lens before, and it must make completing a finished set a bit tricky…

“[Laughs] Yep, the time can range quite a bit. When it comes to actual shooting, it all depends on the situation and what I need to get out of the set. For instance, the big IndyCar news of the Mistic #11 Car” – when Mistic Electronic Cigarettes was announced as co-primary sponsor of Sebastien Bourdais’s KVSH Racing entry – was a full day shoot with access to the track, so I had about five hours in total to shoot. It felt great not being rushed: I was solo on the shoot using the timer for the shutter and the on-camera flash to trigger a Speedlite, so time was a good thing to have. The post end of things took about two weeks to get the whole set finalized between revisions. Compare that with Rallycross images, where I have about 10-15 minutes to shoot the car – wherever it is – to get a solid release image. The post on these is much heavier too since it involves a lot of work.” 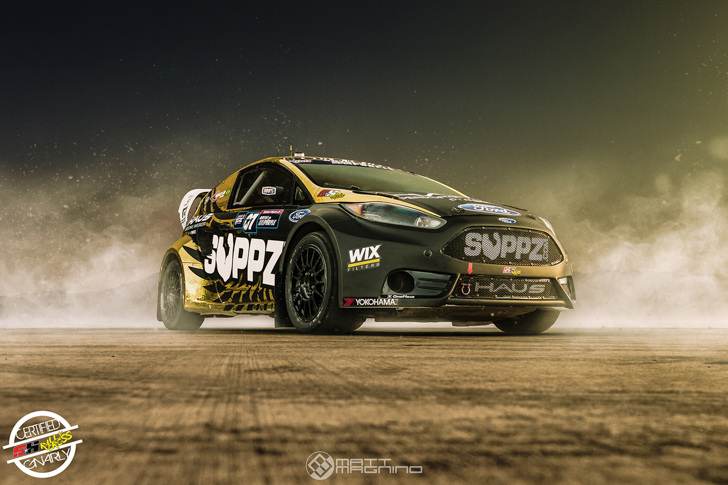 Any particular favourites stand out in your mind?

“The SUPPZ Ford Fiesta Image from last year: that single image took a week on its own to get every thing dialed in. That involved a lot of time and effort, and I remember stepping away to refresh my brain a few times too. But probably the Miura was the longest project from start the finish.

“I had the concept in February 2013 to grab an image on-location, we shot the background in March, shot the car in June (whilst helping Jeremy Cliff on a shoot), then started piecing the composite together immediately and didn’t finish until September. A few days spent working on it followed by weeks of not touching it. That was a mammoth exercise, but well worth it in the end.”

Ever get any comments from other photographers who believe using photoshop to amplify a set is a ‘sin’?(!)

“Every single day. And I’m not even joking. It’s a battle I swear will never die.

“To be honest, many of the people who do complain about Photoshop either don’t know how to use it or don’t know how to use it well. These so called ‘purists’ believe that post is the devil and should be banished, but when you bring up the concept of film photography and work done in a darkroom, then there’s the tired old “it’s not the same” argument time and time again. I had to shoot film for school and the amount of time I spent in a darkroom taught me to appreciate how people like the great Ansel Adams had to develop his own style of ‘post to create the mind blowing landscapes that he did: they certainly didn’t come straight out of the camera because it just wasn’t possible. I rely a lot on post processing to get my images to look how they do, and I’m not afraid to admit that. I’d even go further: post-processing is my favorite part of the photography world.” 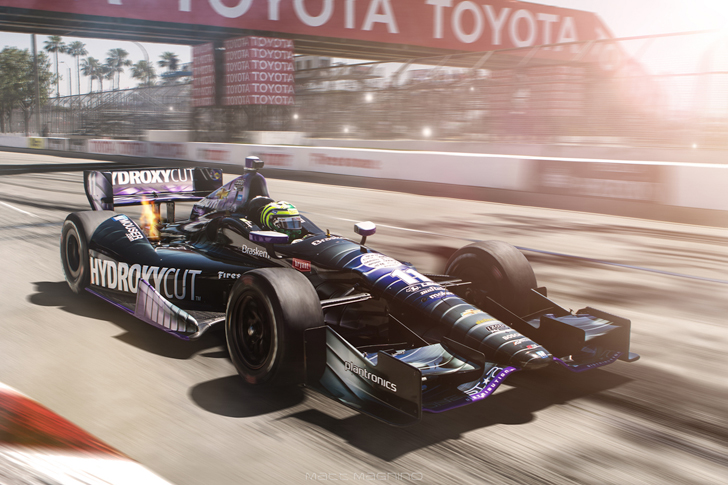 Let’s take a step away from the darkroom to the race circuit. Perhaps you could share some of your experiences as a motorsport photographer…

“Race weekends are chaos from start to finish. The days are long and you are constantly moving around from spot-to-spot. I do a lot of work with the drivers as well following them to interviews and the media presentations they have to do, so I have to cover things on and off the race track. In racing there are so many variables that fall into place you have to be prepared for everything.”

“Oh yeah. I mean, the Indy 500 is truly incredible: if you ever get a chance to go, make it happen. The place is amazing and the atmosphere is…it really is unexplainable. There truly is nothing like Indianapolis Motor Speedway on that weekend.”

“Getting to work with professional race car drivers has seriously become a dream come true. Growing up, I looked up to all of these guys, and to get work with them and call them my friends is something I would never have expected in a million years. They are some of the coolest people I have ever met.” 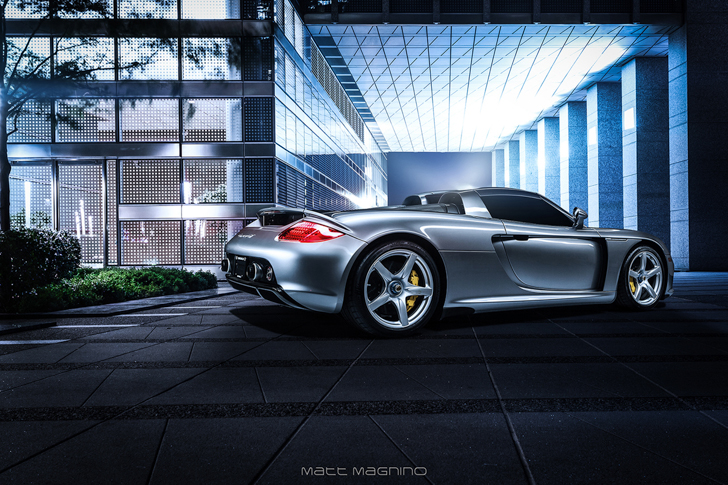 The road is already on for Indy, but can you drop us any hints on what else you might be getting up to this year…

“Racing season is right around the corner, so expect some more racing-oriented material coming your way. I also hope to shoot some other cars this year as well, but we will see which way the road takes me.”