Ahead of our first drive of the Wraith Black Badge in Las Vegas, crankandpiston.com takes an in-depth look at, possibly, the most radical Rolls-Royce yet

We cannot display this galleryIt’s clear from the get-go that Jamal, who joins us today from Rolls-Royce, is feeling twitchy. For starters, the actual first drive of the new Wraith Black Badge we’re shooting today will only take place a few days from now 12,000km away in Las Vegas. Though Jamal is happy to walk us through the ins and outs of the newboy, he’s very keen to make sure that impressions of the drive are not part of today’s schedule. Cue overly dramatic sigh from yours truly.

It’s more than that though. Given the expectation weighted on the new ‘Black Badge’ range – beaten only by the 2017 Cullinan SUV – it’s a twitchiness that stretches all the way back to company headquarters in Goodwood. The Black Badge after all targets a younger audience for Rolls-Royce in line with the falling average age of its customers, whilst at the same time avoiding alienating its established owners.

More significantly even than that, the Wraith Black Badge is probably the closest Rolls-Royce is ever likely to come to a performance weapon.

“You could say we’re transforming one of our icons and giving it a darker edge,” Jamal explains, already loosening his tie as the Middle Eastern heat begins to knock the breath from our lungs. “On the surface the Black Badge is definitively a Rolls-Royce. But underneath? It’s a very different beast.” 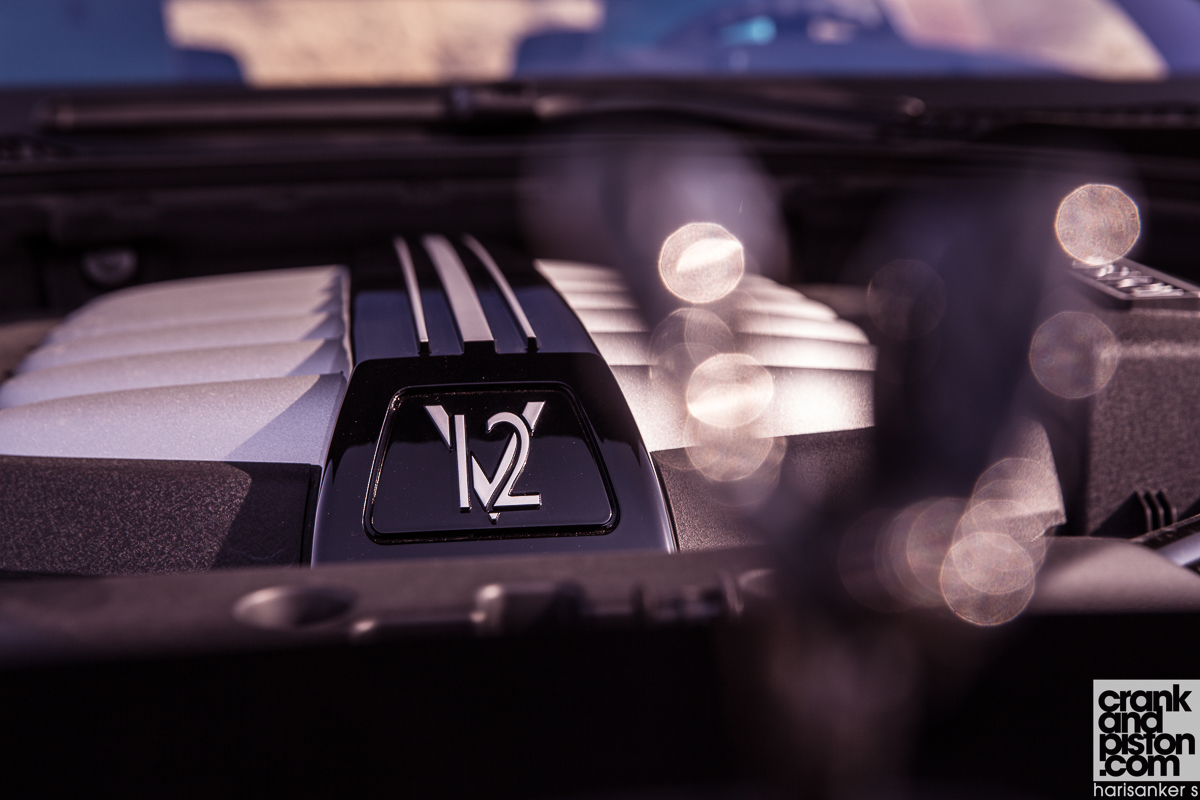 It’s a description remarkably similar to the official marketing material, in which Rolls-Royce underlines the ‘restless spirit’ and ‘more assertive, confident and demanding aesthetic’ – blah blah blah – of both the Black Badge and its ‘new breed of customers’. Wade through the exhausting hyperbole though and there are some salient points. For starters, the Black Badge is no one-off, Rolls-Royce having already confirmed a ‘permanent bespoke series’ akin to Mercedes’ Maybach sub-brand (though only the Wraith and short-wheelbase Ghost will receive the Black Badge treatment). And though the company refrains from using words like ‘performance’ and ‘speed’, one very un-Rolls-Royce term – ‘powerful’ – is repeatedly uttered in barely hushed tones.

The Wraith’s 6.6-litre twin-turbo V12 remains intact with, ironically, the same 624bhp power figure as before. Torque meanwhile has been upped from 590lb ft to 642lb ft for a ‘uniquely discernible extra edge’ (but don’t bother asking for 0-100kph times or a top speed). Similarly the uprated eight-speed automatic gearbox remains largely untouched, although RR’s engineers have implemented what they call ‘intuitive throttle response’ into its configuration. Use more than 25 per cent throttle and the gears are held between 200rpm and 500rpm longer for added grunt. Between 70 and 80 per cent of throttle, the transmission is remapped for speedier changes, and should you be suitably unsavoury to use 80 and 100 per cent of the throttle, the V12 revs through to a very un-Rolls-Royce-like 6000rpm. Even under deceleration, the transmission will downshift a few rpm sooner to heighten engine braking for more composed corner entry.

It’s minute stuff, admittedly, since Rolls-Royce has no intention of negatively impacting its core luxury values. Nevertheless, it does indeed show (forgive me) a darker side than we’ve seen from Rolls-Royce hitherto. Even the air-suspension has been completely redesigned for more ‘driver-focused’ agility: had any Rolls-Royce engineer suggested such a thing even five years ago, it was with resignation letter in-hand. 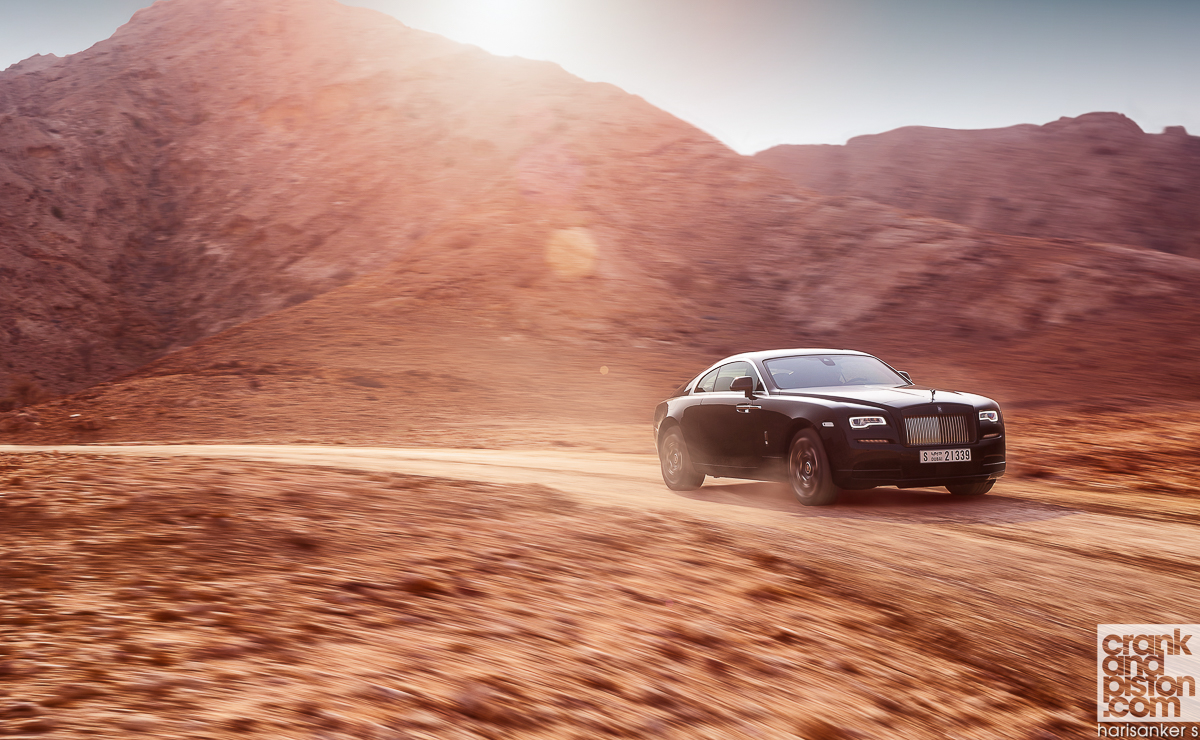 Aesthetically though is where the Black Badge really sets itself apart from the standard Wraith, as Jamal, now rolling up his sleeves, takes great delight in showing me. The use of dark chrome – meticulously machined, of course – is one of the bigger design addendums, detailing the front grille surround, boot lid finisher, lower air inlet finisher and exhaust pipes as it does. Traditional features like the pantheon front grille and the Spirit of Ecstasy remain unchanged in both design and material, but are clad in an edgier shade of black or dark silver. And if this sounds like small potatoes, bear in mind that RR doesn’t take such decisions lightly. It’s the first ‘radical’ step since Sir Henry Royce changed the traditional red-on-silver double R logo to black-on-silver. In 1933. And even this took weeks to approve.

An appropriately ‘intense’, hand-polished black adorns the Black Badge bodywork, the deepest yet on a production Rolls-Royce. A theme that continues across the lightweight alloy wheels (which retain the self-levelling Rolls-Royce emblem in a particularly neat touch) and into the cabin. The air vents front and rear are darker than normal, ditto the starlight headliner on the roof, and even the infinity logo on the rear seats – denoting a ‘daring’ attitude – is stitched in deep black. It’s an impressive look, and yet I can’t help but comment to Jamal that, perhaps, the very-blue interior knocks this ‘dark theme’ just a tad. Riposte already loaded in the chamber, he’s quick to point out Rolls-Royce’s vast options list, though refrains from mentioning how much this adds on top of the $365K you’re already forking over (some $45K up on the Wraith itself).

“Should you be suitably unsavoury to use 80 and 100 per cent of the throttle, the V12 revs through to a very un-Rolls-Royce-like 6000rpm”

Mounted on the dash is a bespoke ‘Black Badge’ clock with orange-tipped hands, while the – deep breath – aerospace-grade aluminium-threaded carbon fibre composite surfacing is a material often used on stealth aircraft, and weaves aluminium just 0.014mm in diameter together with carbon fibre before SIX layers of lacquer are applied. It’s painstaking work, confirmation if it were needed that ‘luxury’ on a Black Badge takes precedence over ‘spirited driving’.

Which reminds me. I wonder how Mo is getting on… 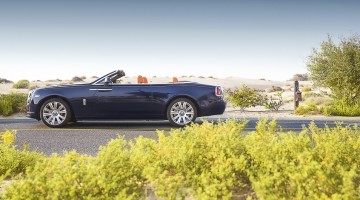