Audi Q5. Behind the scenes at Jebel Jais

Eight reasons why the Audi Q5 is the camera car of choice for automotive media.

Even by crankandpiston.com standards, this is a pretty cheeky line-up we’re shooting on Ras Al Khaimah’s now acclaimed Jebel Jais mountain road. One of our contenders today boasts a pristine prancing horse, another the hallowed ‘R’ badge straight from Stuttgart, and our third model arrived from a well-known British manufacturer based in Norfolk. Yep, this should be a good one.

Such occasions deserve a camera car for those all-important motion shots. Something nimble, with character, bags of oomph, and a stonking list of optional extras. We of course refer to the 2013MY Audi Q5.

And no, we’ve not gone mad. There are in fact eight very good reasons why Audi’s mid-size SUV is an ideal choice for the job. 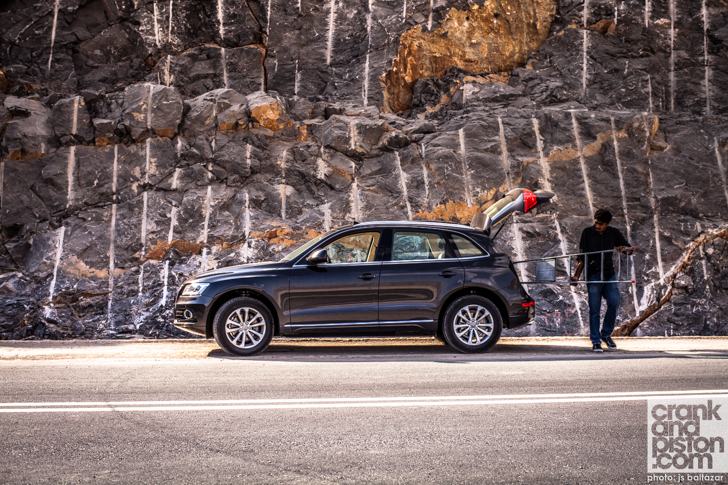 When you’re dragging around spare lenses, memory cards, camera bodies and bags, tripods, laptops, and a three-strong crankandpiston editorial team, you’re going to need a bit of room. Fortunately the 540-litre load space in the boot can be extended to 1560-litre simply by folding the rear seats down (which, incidentally, fold flat). When you’re in a (very) early morning fit of rage at a ladder that won’t slide into the ****ing boot properly, such practicality proves invaluable. You may not even need the myriad hidden compartments: we were unaware of the sunglasses holder beside the rear view mirror until we were halfway home. 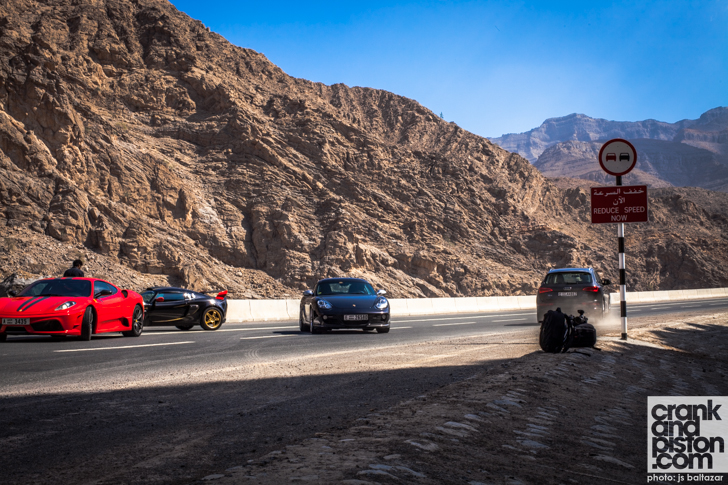 A surprising amount of grunt is packed into the 2.0-litre TSFI turbo four-cylinder unit, to the tune of 222bhp and 258lb ft of torque. It’s a pretty good start for the Q5. Granted a near-1700kg kerb weight (thanks mainly to leather upholstery, wood trim and a Bang and Olufsen surround sound system) means the Q5 is a tad outgunned by its estate and indeed saloon car Audi brethren off the line, but the mid-size SUV is no slouch either with 0-100kph nailed in 7.1 seconds. Top speed, which we’ve no hope of hitting on the torturous climb, is a respectable electronically limited 250kph. It may not hold a candle to the lightweight high-powered track weapons we’re shooting today, but the Q5 nevertheless puts up a good fight 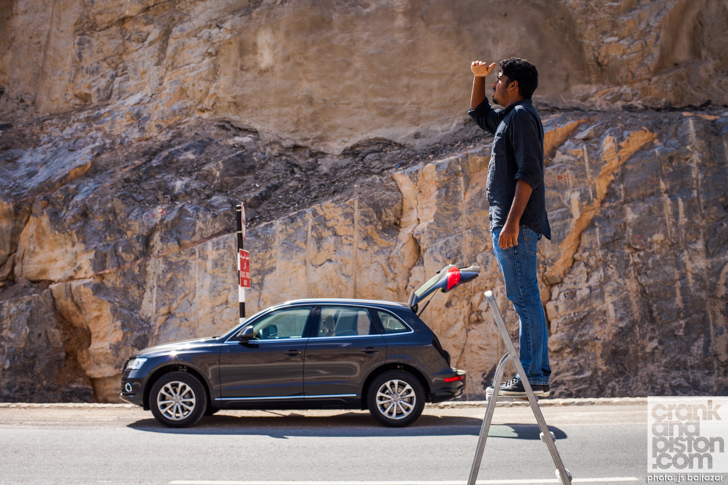 A camera car should never overshadow the subject matter, and while it is unlikely to do so against a Ferrari, a Porsche and a Lotus, subtle exterior looks mean our Lava Grey pearl effect Audi Q5 is unlikely to gran much limelight anyway. Give or take some chrome detailing about the windows and side skirts, the Q5 is very inoffensive, with sleek bodylines residing muscular haunches to the spare parts bin. There’s that familiar Audi front grille and rather natty chiselled headlights, but stylish rather than flaunting 18-inch alloys and a ‘job done’ tailgate mean the Q5 will hold its own nicely against the BMW X3s and Mercedes-Benz M-Classes of this world, but is unlikely to intrude on our sportscar playground today. 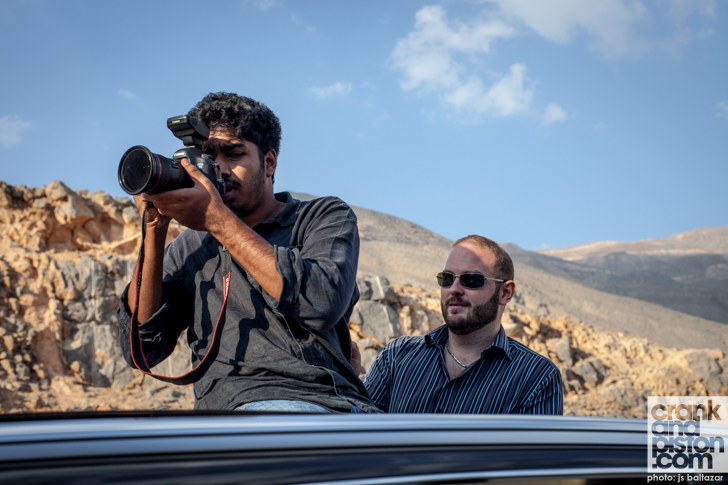 One particularly endearing feature of the Q5 however is the enormous panoramic sunroof, which stretches the whole length of the vehicle and allows copious amounts of sunlight into the cabin as a result: during Middle East ‘winter’, it’s beautifully effective. It does only open halfway, but that’s more than enough room for crankandpiston lensman Arun to slide through and grab the overhead shots he needs. Even on the move. Then again, said sunroof did cause a few problems: a wasp in the cabin doesn’t make for the most relaxing of return journeys. 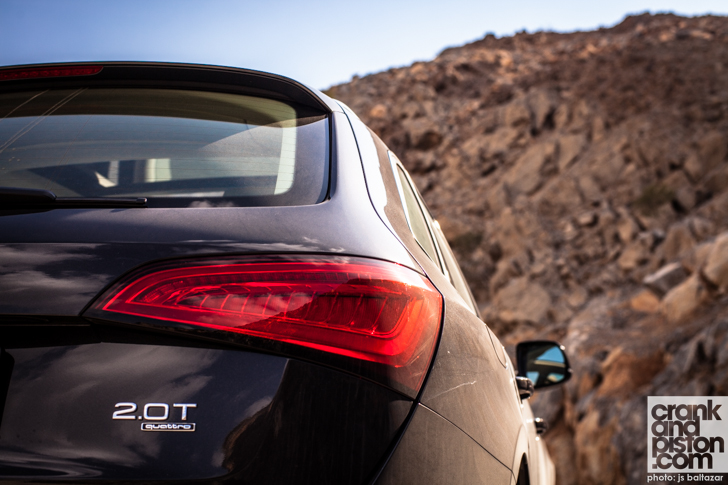 As prudent as eight-speed gearboxes are for fuel economy (the Audi Q5 delivering an impressive 7.9L/100km for its size), hammering through gear after gear can prove laborious through the city or on the highway. Fortunately the Sport driving mode (which leaves the steering and suspension well alone but does make the gear changes crisper) allows us to hold the gears for much longer as we make the climb up Jebel Jais, eking out those 222 (brake) horses as a result. To stop you going truly hell for leather, even in manual mode the automatic tiptronic box will change up if you’re hurtling towards the redline with aplomb. The eight-speed will also wait for a ‘safe rpm’ figure before slotting the gear you want. A tad frustrating certainly, but quick linear acceleration on the brief stretches between corners does make for bizarrely exciting driving. 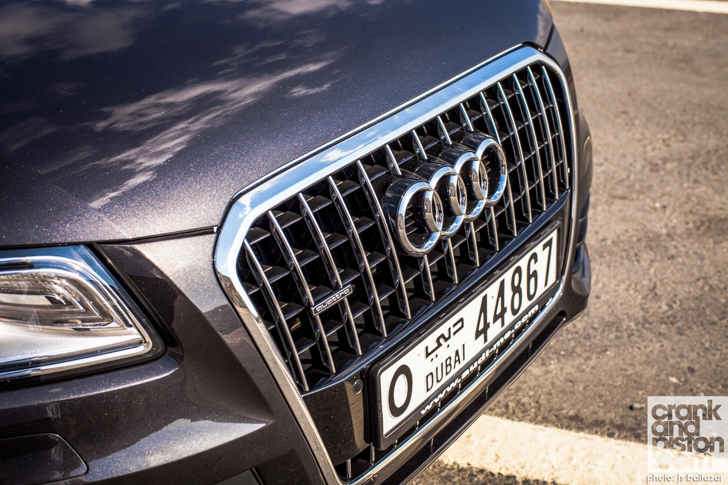 Normally I don’t much care for Audi’s speed-dependant power steering. It’s a system designed to take weight out of the wheel at low speeds and filter it back in when the vehicle is at pace, making city driving easier on the shoulder pads whilst still leaving enough heft to leave you enough feel for the front wheels. The difference though is so abrupt that it’s difficult to ever feel properly connected to the front end. And whilst my prejudices have not waned as we head up the hill, lightened power steering whilst scouting for locations (which includes a lot of three-point turns ‘to see if that spot is interesting’) doesn’t take nearly as much out of us as normally it does. Grip is also impressive, and only moderate bodyroll and understeer making the Audi Q5 much more manoeuvrable than you might think. 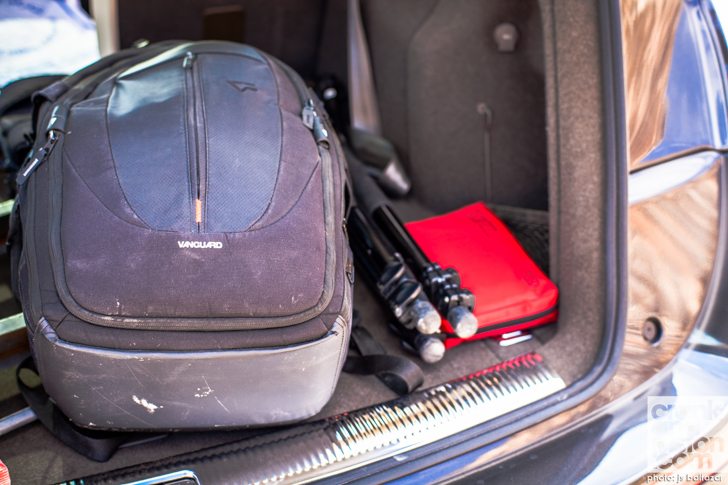 When you stick three blokes into a car with camera gear during a shoot that lasts 11 hours, you’re asking for trouble: the first hour has barely ticked by and empty water bottles, coffee mugs, subway wrappers and battery packets are already starting to mount up. Throw in a stepladder ingrained with most of the Arabian desert landscape and you have a room your mother will be ashamed of. In lesser models, seat trim would be frayed, floor mats soiled and upholstery crying for mercy. The Q5 though takes these blows whilst scarcely batting an eyelid. Just as well, since we didn’t fancy a strongly worded email from our dutiful Audi PR team asking about this mark, that scuff and this stain. 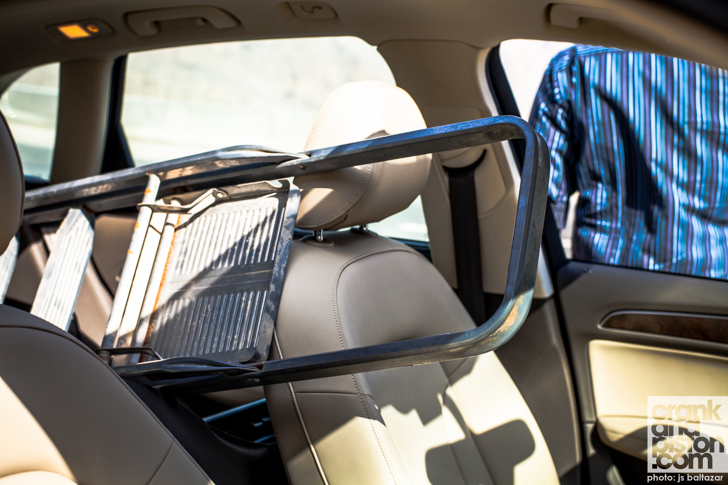 Previous crankandpiston.com camera cars have boasted incomprehensible satnav, legroom sufficient for only an eight-year amputee, and seats less comfortable than falling down a flight of stairs. The warning beeps in the Audi Q5 (door is open, engine is running, seatbelt is unfastened, and etc) can quickly begin to grate, and my left knee will often switch off the headlights given the position of the rotary dial on the dash. Head and legroom though are plentiful, the leather seats are superbly comfortable, ride comfort makes for beautifully smooth motion shots, and an easy-to-use – albeit slightly outdated – infotainment system make both highway journeys a breeze. Just as well, since after an 11-hour shoot we’re all completely knackered.

So there you have it. Should you find yourself needing to shoot a Ferrari, a Porsche and a Lotus – and yes, we will be bringing you the full coverage soon – then the Audi Q5 could be exactly the camera car you’re looking for. Just remember that a step-ladder cracking you in the temple under heavy braking can hurt quite a bit.