crankandpiston sits down with current Marussia F1 Team driver Jules Bianchi to discuss his rookie campaign in Formula 1, why a 13th position can be oh-so critical to F1 minnows, why a potential Ferrari F1 call-up could happen at any day, and why he hasn’t quite lived down the ‘incident’ during this year’s German Grand Prix.

Though he tries his best to hide it, an enormous yawn escapes Jules Bianchi’s mouth as we sit down for a quick chat ahead of the Formula 1 Abu Dhabi Grand Prix. And justifiably so. Across 2013’s 43 weekends thus far, the Frenchman has competed 16 times across five different continents and taken on hundreds upon thousands of the world’s media representatives (a brief press conference pre-interview being just one of them). Understandably, he’s pretty knackered.

As crankandpiston finds out though, a burgeoning F1 career is just part of Jules Bianchi’s portfolio… 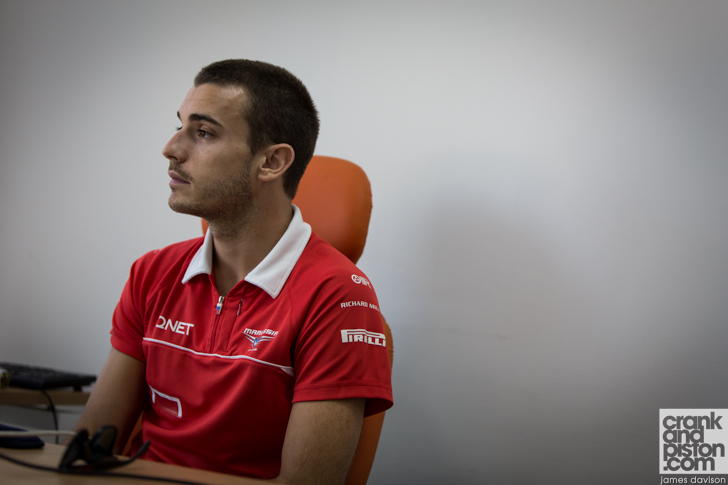 Jules, firstly many congratulations on extending your deal with the Marussia F1 Team. Given that there are only three races of your rookie campaign to run what lessons do you feel you’ve learnt in 2013 that you can take into next year?

Well for sure I’ve learnt a lot. The thing is the series will be change again next year, so it’s a bit of a shame. I’ve learnt a lot in this car and it would have been nice to be in this car again next year, but everything will start from zero again. But I still think I’ve developed a relationship with the team at least and I’ve also developed a lot of confidence in Formula 1. When I first arrived, the team had already run the car in testing and I was not 100 per cent sure, but now I am. And I can do what I want with the car, which is great.

Yes, next year’s technical regulation changes – with the switch from 2.4-litre V8 powerplants to 1.6-litre turbocharged V6s being the most critical – mark a major change in F1. So how important is stability in your sophomore campaign?

It’s really good to have continuity with the team. The team is making progress, I am making progress too, and I’m really happy that we’re making strides in that direction and will try to be more on the limit at the beginning of next year. 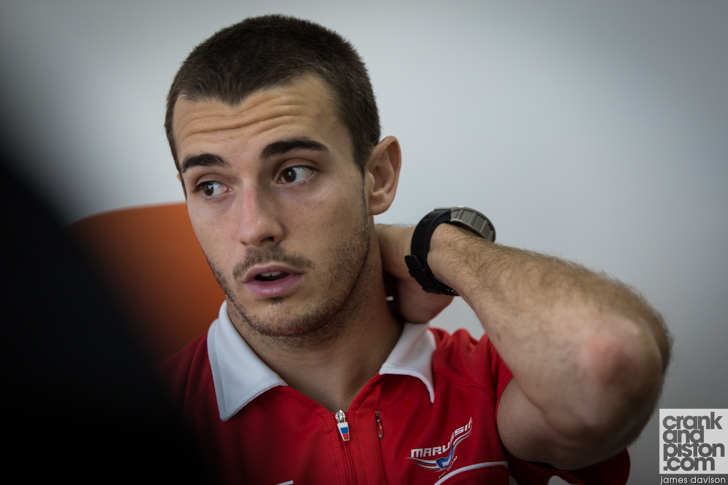 As well as changing engine sizes next year, Marussia are also swapping from Cosworth power – which they’ve used since entering the sport as Virgin Racing in 2010 – to Ferrari powerplants. Given your high-profile relationship with the Ferrari Driver Academy, does this put more pressure on you to do well?

Not really. I think Ferrari is looking at what I’m doing and I think at the moment they are pretty happy, so I just need to continue doing what I have been doing in the last 15/16 races, and everything will be okay. Perhaps there is a little pressure that Ferrari are keeping a close eye on what I’m doing and that they want me to be ready one day to drive for them, so I know that if I become a really good driver and one of the best in the world then maybe I will be with Ferrari one day. But pressure is part of the job, so I just need to handle that and do as good a job as possible.

F1 also makes its return to Austria and Mexico in 2014, two former giants of the sport’s calendar. How important do you think it would be for the sport to return to France?

It would be great. We have four French drivers now in F1 [including Jules, Lotus’ Romain Grosjean, Caterham’s Charles Pic and Toro Rosso’s Jean-Eric Vergne] and it will probably be the same again next year, so it would be really important to have our own race. We’re one of the strongest nationalities in Formula 1 at the moment and it would be great as such to have a French Grand Prix again. 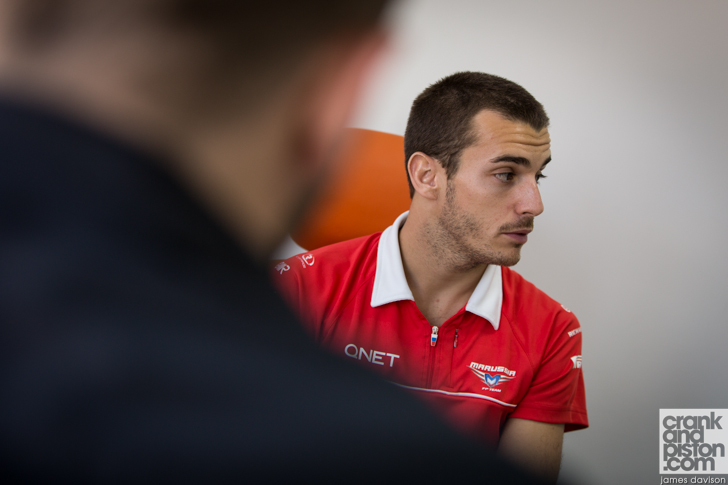 Well actually I was already talking to another team at the time. I was reserve driver for Force India last year, and I was preparing myself to race in Formula 1. But very late on, in February I think, Force India said they would not be taking me. So the plan changed, and the contract for Marussia came up. So I was prepared in a way because I was looking to move up anyway.

Justifiably so given your performance in the first two races, where you outqualifed both Caterhams and your teammate Max Chilton in Australia and took the team’s highest finishing position this season (13th) in Malaysia…

Well in terms of result, Malaysia was the best race. But I think it was not the best one in terms of my driving performance. It was only my second race in F1, and now I’m much better. For example, last weekend in India [where Jules finished 18th] I was really happy with my pace.

Yes, that was a strange thing. I had an engine failure, so I stopped on the left side of the track where the track was going uphill. When I jumped out the car it was not moving but when the tractor came the wheels started to roll, the ground moved, and the car rolled out onto the track. So that feeling was not so nice(!), but fortunately nothing happened. 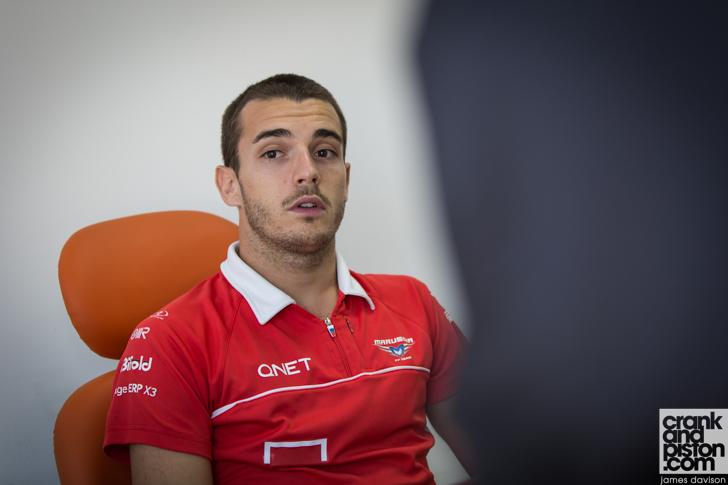 Let’s take a look at your family’s motorsport history. Your grandfather Mauro was crowned world GT champion three times and your great uncle took Ford’s third 24 Hours of Le Mans victory on the bounce in 1968 with Pedro Rodriguex and the iconic GT40. Given that background, were you destined to be in motorsport?

Yes, for sure, it has helped that my family has a motorsport background. Also my father owned a go-kart track, so this helped me a lot. I drove a lot of go-karts when I was young. That was a big push for me.

Once on the ladder, you don’t waste time adapting to new environments. In your first year racing cars in 2007, rather incredibly you took the French Formula Renault 2.0 crown. Is this down to a certain mentality you have going into each season?

I think my approach is quite simple: I just want to win all the time. Obviously this year when I started with Marussia I knew that I was not going to win. So I fixed another target, which was to be in front of Caterham [F1 Team] and I try to do that whenever I can. Sometimes the car doesn’t suit you very well but you try to adapt and predict what the car will do and be as quick as possible with what you have. 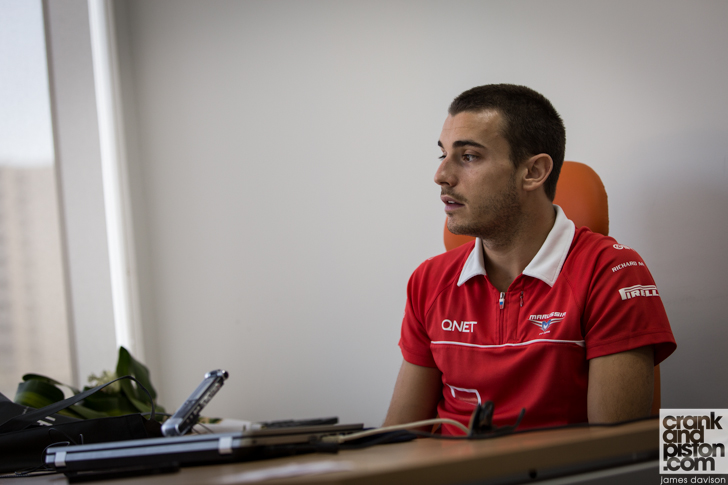 After winning the Masters of Formula 3 race in Zandvoort in 2009 at Zandvoort (an annual event that boasts F1 luminaries David Coulthard, Jos Vertseppen, Lewis Hamilton, Nico Hulkenberg and Paul di Resta among its winners), your next significant championship was the 2009 Formula 3 Euro Series crown against Valtteri Bottas and Esteban Gutierrez among others. With all three of you now in F1, does that crown mean slightly more to you retrospectively?

Oh for sure, it was a great title and there were a lot of good drivers [competing]. It’s a great series because you learn a lot about everything. Then when I moved to GP2 I did a good season and finished third twice in the standings, including last year. So I think my background has been pretty good and it’s all helped me establish myself in F1 now.

You spent both GP2 years with the respected ART team, which became Lotus ART in 2011. Did you ever come close to signing with Team Lotus, now Caterham?

In 2011 I was not going to drive in F1 as it was a bit too early. I was feeling ready but people were not sure about that, so I took on another series which was Formula Renault 3.5 [in which Jules finished second overall] and I was third driver for Force India too. After all that, I was fully ready for an F1 season. 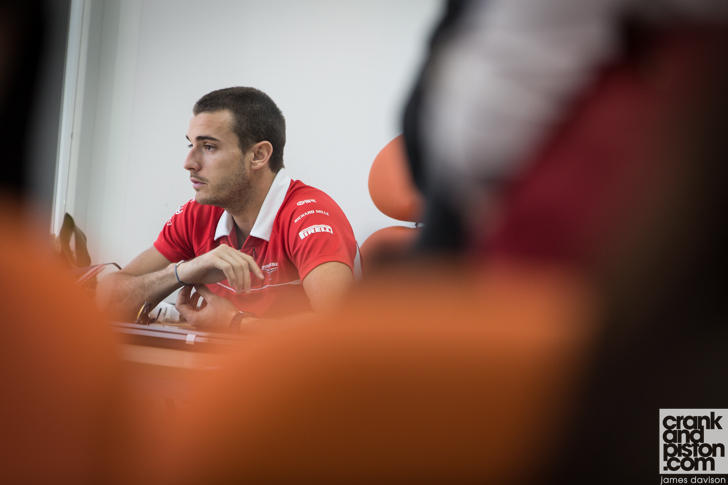 You (eventually) made the jump, and will now line up for season two in 2014. Tell me, given how difficult it is for debutants to make a name for themselves in the sport these days, is it harder to get into F1 or to stay there?

It’s really hard to get into Formula 1 but it’s even more difficult to stay there. So, that’s why when you are there you have to grab your opportunity and do your best to prove to people that you deserve to stay.

Step by step obviously, but what do you hope to achieve in F1 now that you’re staying?

Well in the short term it’s just to be improving all the time with Marussia and getting the best results we can. Long term, I don’t know. It’s really good that I’ve signed already for next year and since F1 moves so quickly you just have to focus on what you’re doing right now and not plan too far ahead. It’s really difficult to stay in F1 so you have to be really focused on staying there.

– Our thanks to the Marussia F1 Team and QNET