With prices currently as low as $80,000, Aston Martin’s early-noughties flagship has huge potential – but tread carefully. Here’s what you need to know about the original Vanquish

Damnably seductive, the original Vanquish. As Richard Meaden wrote after driving a very well-used example for Vantage issue 002, it’s a car with ‘vivid performance, a tremendous warmth of character and a rousing delivery that grips you from the moment you press that big red starter button and never lets you go. As when new, its charisma more than compensates for its few failings, and cements its place as one of the great Aston Martins. With early examples available for as little as $80,000, they are horribly tempting.’

Couldn’t have put it better myself. As I write, there are half a dozen for sale for less than $85k. Horribly tempting. Especially when you start to list the Vanquish’s credentials as one of the Aston Martin greats…

This was the last extensively hand-built Aston and the last to come from the old Newport Pagnell works, which to some makes it the last ‘real’ Aston. Not that it’s a dinosaur. In many respects it was also the first of the new-era Astons. The first to be launched under the stewardship of Dr Ulrich Bez, and the first to be built around a structure of extruded, bonded aluminium and advanced composites.

Another break with tradition was the automated six-speed manual gearbox, which did away with a clutch pedal and introduced paddles for the first time on an Aston, side-stepping the notoriously heavyweight manual gearshifts of previous flagship models.

And then there was the 460bhp 5.9-litre V12, a Cosworth-led evolution of the engine that had first seen service in the DB7 Vantage. It endowed the Vanquish with suitably vivid performance – 0-100 in under 5sec, a top speed of around 305kph and a rousing soundtrack to match – while the stiff platform and beautifully controlled suspension gave the Vanquish a light-on-its-toes demeanour that was a revelation after the previous supercharged Vantage flagship. And all clothed in a body of undeniable muscularity and ‘presence’, Ian Callum’s first clean-sheet Aston design.

There are two other factors that should prove crucial in determining future values. As Paul Spires, sales manager at Aston Martin Works, says: ‘Never underestimate the Bond connection. We know what that’s done for DB5 values, and a lot of people who saw the film in 2002 [007 drove a Vanquish in Die Another Day] are now in a position to buy their own. Buy a Vanquish in Tungsten Silver with black interior for 60 or 70 thousand and you can act out all your James Bond fantasies!’

And then there’s the fact it was built in relatively small numbers. Neal Garrard, of Nicholas Mee & Co, says: ‘Total production, we believe, was 2578, including 1012 Vanquish Ss, which is only a third of the number of DB7s, while DB9 production is around 16,000 and there are even more V8 Vantages. That gives you some idea how rare the Vanquish is.’

It’s a compelling case, and canny buyers are starting to cotton on. As a result, well-cared-for examples are creeping up in value. Expect to pay from $75,000 upwards for a well-maintained early Vanquish today. ‘Values are just starting to move ahead,’ says Paul Spires. ‘I’ve sold a number of early cars in the last few months for between $80,000 and $100,000, while a nice S is $135,000 and an Ultimate Edition [the run-out model, just 50 made] is way beyond that.’

Predictably, mileage, service history and condition count most, but specification also plays a part. The Linn audio system that replaced the original Alpine hi-fi for the 2003 model year is desirable, as is full leather (some Vanquishes have Alcantara centre panels on the seats), while 2+2s are slightly more sought-after. 007-spec Tungsten paint adds value; conversely, dark blues and greens are not so saleable.

A really worthwhile option was the Sports Dynamic Pack, available from 2003, which added uprated suspension and brakes. The Vanquish S, introduced in 2004 (from chassis 1506), incorporated the handling upgrades, along with a new aero package, an improved gearshift and a power increase to 520bhp. ‘The S is a better car,’ says Paul Spires, ‘but it’s worth noting that an early car can be uprated to what is effectively S specification.’ Works has also converted a number of Vanquishes to manual transmission, using the six-speed Tremec unit from the DB7 GT.

‘You do need to tread carefully,’ says Spires. ‘The thing is, Vanquishes were in the doldrums for a while, and many cars weren’t looked after as they should be. Those cars can take a lot of money to bring back into good order. And the way it’s constructed means restoration can be expensive. It’s a flagship Aston Martin, you can’t get away from it, and the running costs are those of a $242,000 motor car.’

So, how to find a good one. A full service history by reputable specialists is the first box in need of ticking. Ideally Vanquishes should be serviced every six months or 12,000 kilometers; if a car’s had anything less than an annual service it should certainly put you on your guard. If in doubt, have your potential purchase inspected. Works offers an inspection and road test report for $970 plus the cost of transporting the car to Newport Pagnell; several of the other Heritage specialists like Nicholas Mee offer a similar service. It’s possible to buy a warranty, too.

The good news is that the V12 engine is very strong, and serious faults are rare. The most common problem is with the coil packs, which suffer both from heat damage and occasionally from water ingress causing shorting. It’s an expensive job to replace them, and always best to do a bank at a time (budget around $800). So check the engine pulls cleanly and smoothly. Any misfiring points to problems.

Potentially the most serious issue is oil consumption caused by the engine ingesting its own oil vapour because the reed-type valves in the breather system have stuck open. A low oil level could eventually lead to starved big end bearings at the back of the engine. So look inside the air filter for a heavy oil deposit; anything more than a light misting could spell trouble. Don’t be put off by the automated manual – properly set up and driven with a little sensitivity, it’s a decent system. The Magnetti Marelli hardware sits on the back of the transaxle, providing electro-hydraulic actuation of the gearchanges. ‘Early cars had analogue gear position sensors, which can wear, which is when you can get problems,’ says Paul Spires. Later cars (chassis 600 onwards) had magnetic sensors, which are much more robust. Most early cars have had them retro-fitted when the clutch has been replaced. The shift has benefited from software updates over the years, too.

Neal Garrard, of Nicholas Mee & Co, makes the point that the system benefits from crisp handling so as not to overwork the clutch plate (budget around $5k if a new clutch is needed). It’s something those familiar with the car do automatically, along with selecting neutral whenever it’s likely that the car will be stationary for more than a couple of seconds.

Unsurprisingly, clutch wear varies hugely depending on driving style. Clutches can last as few as 24,000 kilometers or as many as 60,000. On the test drive you’re looking for a nice crisp pull-away and a crisp change, with no slip, no untoward noises and no serious vibrations. A whistling sound as you pull away suggests spigot shaft bearing wear, which is a $3000 repair; $6700 if the shaft needs replacing too.

The standard brakes aren’t up to track-work but are fine for anything but the most extreme road driving. Cross drillings should be cleaned as part of a service; if they’re blocked it can lead to corrosion, particularly on the inner face.

Speaking of which, look for bubbling at the edges of the aluminium body panels, the first signs of electrolytic corrosion, which if it develops will eventually necessitate a respray. Also check the front wing strakes – they’re cast on some cars and also prone to bubbling (replacements cost around $400 each).

The single biggest problem with the Vanquish, though, is its steel front subframe. Water gets trapped between undertray and frame, causing rust. If it’s extensive it may require replacement ($6700-plus). So remove the tray and check. And also check the small steel bracket at the end of each sill. Corrosion here can spread through the mounting bolts and cause electrolytic reaction in the tub itself. The carbonfibre crash structure front and rear is visible underneath so check for signs of damage, though it is repairable.

So plenty to keep in mind, but a good Vanquish is well worth seeking out. Nicholas Mee & Co have no doubts about the Vanquish’s status. ‘In 25 years’ time we believe it will be seen as a significant turning point for the company, just like the DB4 was in the late 1950s,’ says Neal Garrard. ‘The DB7 was never quite accepted as a proper Aston – the hardcore never really took it to their hearts – but the Vanquish was the real thing.’

Choose wisely, and you’ll have one of the most significant Astons of recent times and surely a sound investment. But you’ll also have an Aston that still feels capable and useable, and one with an unmistakable presence, a real aura about it.

As Paul Spires says: ‘I was lucky enough to own one for a while. When you open your garage door and there’s a Vanquish there, you can’t help but smile.’

What the road testers said at the time

‘It’s a wonderfully comfortable car, with a good driving position, firm seat-cushioning and effortless cruising ability. Wind noise is almost non-existent, even at three-figure speeds, and the engine, so vocal at start-up, remains hushed at part throttle. If there’s a car more suited to chomping through continents, I’ve yet to drive it.

It’s in urban conditions you first appreciate the paddleshift transmission. Pre-Vanquish, driving a big Aston in town required the calf muscles of a Tour de France cyclist to pump the leaden clutch pedal up and down. Now you don’t even need to flex your fingers, thanks to the fully auto ASM mode, which slurs through the gears for you.

With not a splinter of walnut veneer to be seen, it’s not your usual Aston interior. Sure there’s plenty of leather and chrome-trimmed dials, but the bold slab of silver centre console is a bit of a shock. One thing that really does grate is the clock, which looks like it fell out of Jac Nasser’s cracker at the Ford Christmas dinner…

Perhaps the answer is that Aston blew the budget on the hardware, for a couple of feet ahead sits one of the finest engines in production. Though based on the mellow V12 found in the DB7, Cosworth’s brief was to hone it into a sharper, angrier, more rev-hungry engine, and to this end installed new inlet manifolds, camshafts, valve-gear, crankshaft and exhaust. Power is up by 10 per cent – 40bhp to be precise. Not a huge leap, but the way in which it delivers is far more dramatic, encouraging you to wring out each gear to the red line. With three rapid tugs on the left-hand paddle, the gearbox punches from sixth to third seamlessly, accompanied by a hearty blip of the throttle.

Although the Vanquish lacks the old Vantage’s mountainous muscle, it’s light years ahead dynamically. It devours the straight bits with relish, but it also has a ravenous appetite for corners. It’s so fluid, so controlled and precisely damped, you’re barely aware of all that weight at work through the bends.’ 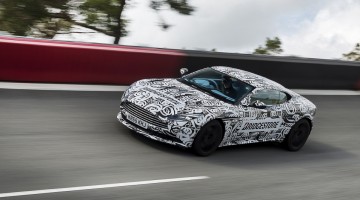 OPINION. Why the Aston Martin DB11 might be worth the wait