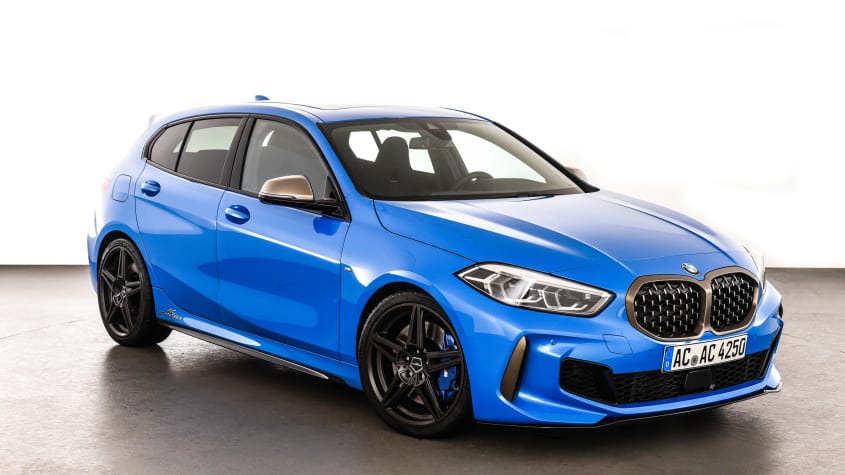 BMW’s latest 1-series is a very different beast from its predecessor. No longer rear-wheel drive, no longer equipped with a six-cylinder engine at its peak, and similar under the skin to products from Mini’s range, it’s not as instantly appealing as the car it replaced.

With a few tweaks though, there’s certainly potential. AC Schnitzer is, as ever, among the first to tackle the F40-generation 1-series, and has now revealed its initial list of upgrades for the entry-level BMW.

An upgrade for the M135i xDrive’s 2-litre, four-cylinder turbocharged engine would be welcome, given its lack of enthusiasm, but that’s still in the works. New tailpipes for the exhaust system are available though, and a sports rear silencer for the M135i will be ready soon.

A new spring kit will shed 25-35mm from the 1’s ride height, while a full sport system is another item on the way, cutting 30mm from the ride height at each end but also promising a handling upgrade. Nineteen-inch wheels are already offered, wrapped in 225/35 tyres. There’s just one design for now, available in either bi-colour or anthracite.

Along with the wheels there are a few styling tweaks currently offered, including a rear lip spoiler and Schnitzer emblems, but front splitters and rear wings will be available at a later date allowing those with regular 1-series cars to jazz up the styling a little. And as ever, there’s the usual suite of interior tweaks – aluminium gearshift paddles, pedals, a footrest and a key holder.

The engine upgrade and exhaust system will probably be the ones most worth waiting for, given they’re probably the weakest aspects of the current car (the chassis is a much better effort), though AC Schnitzer’s wheels alone give the styling a bit of a boost, which may be enough for some.