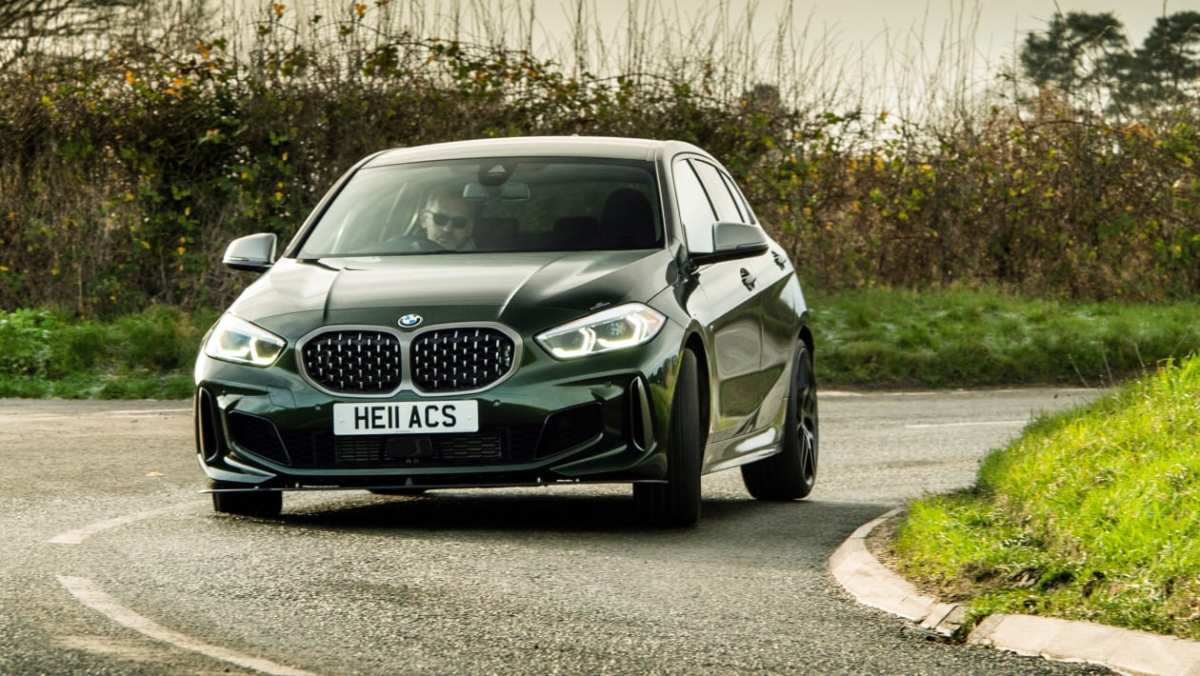 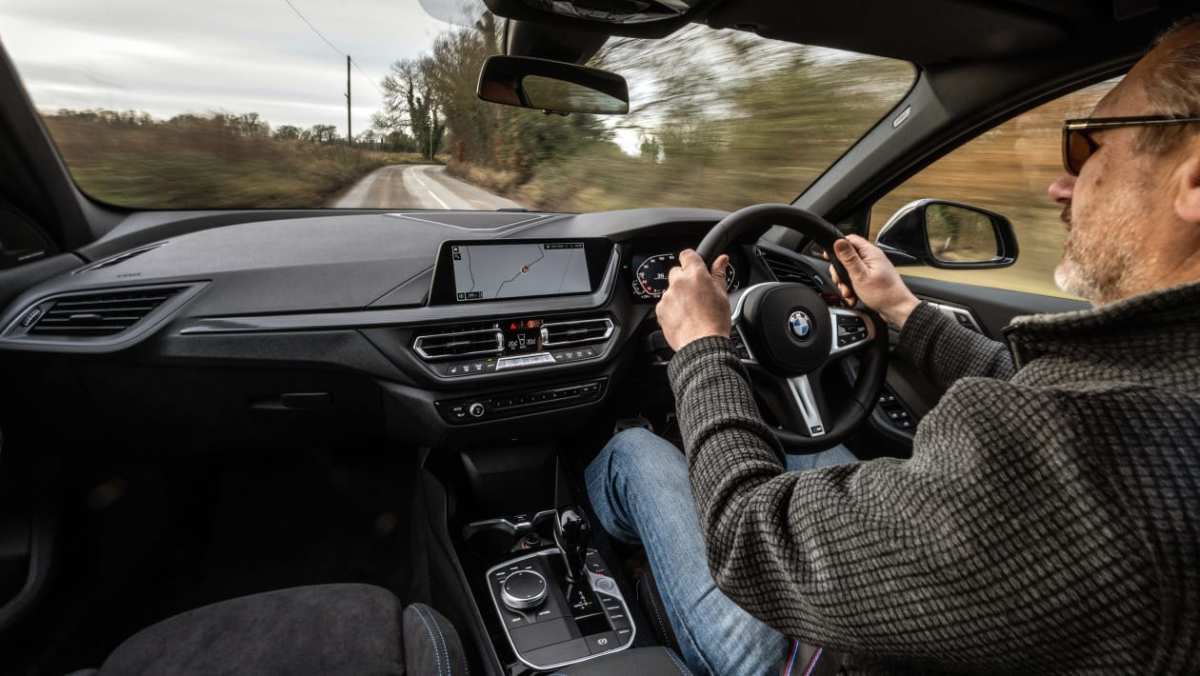 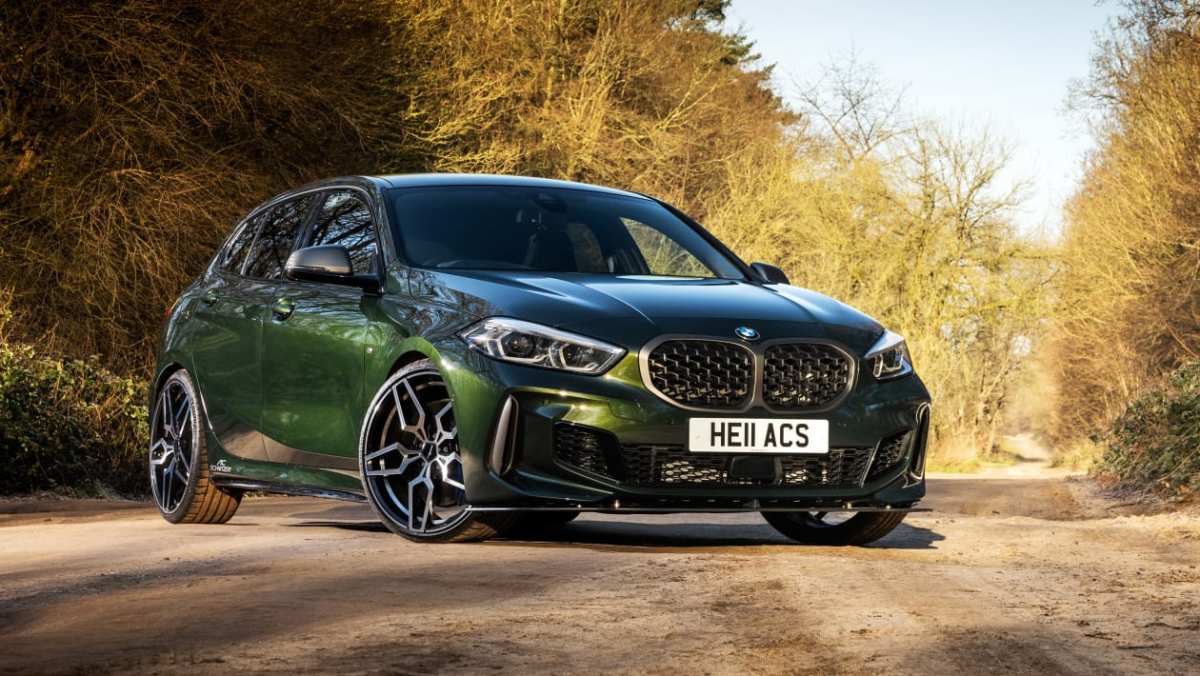 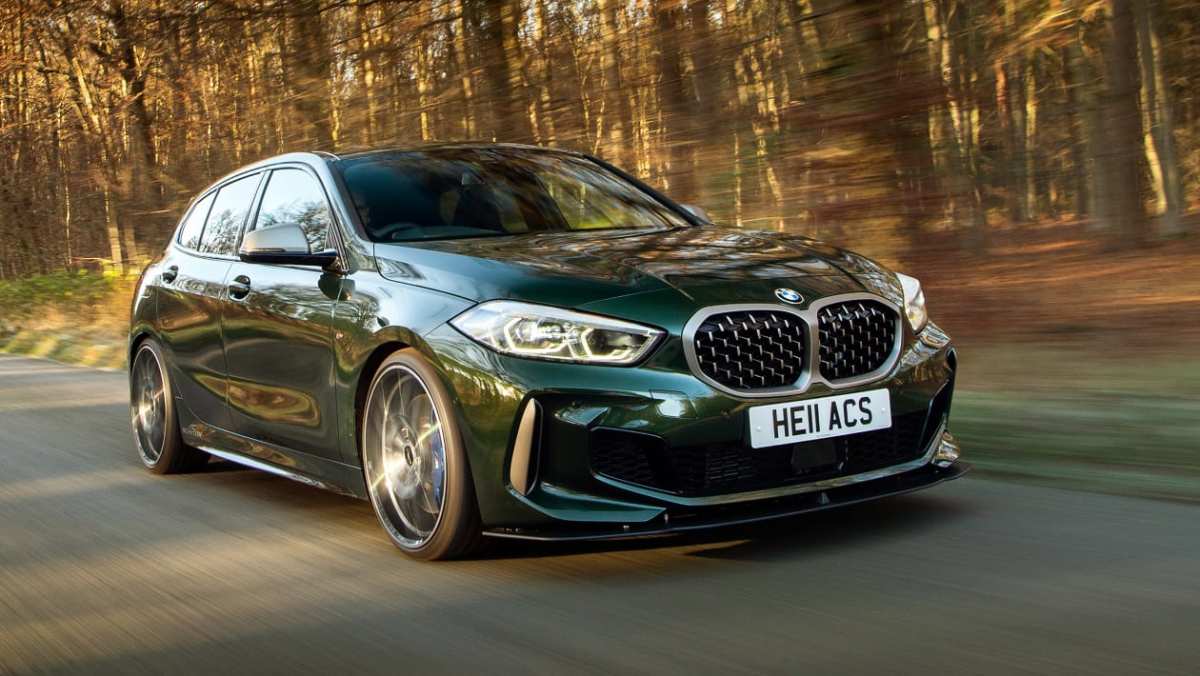 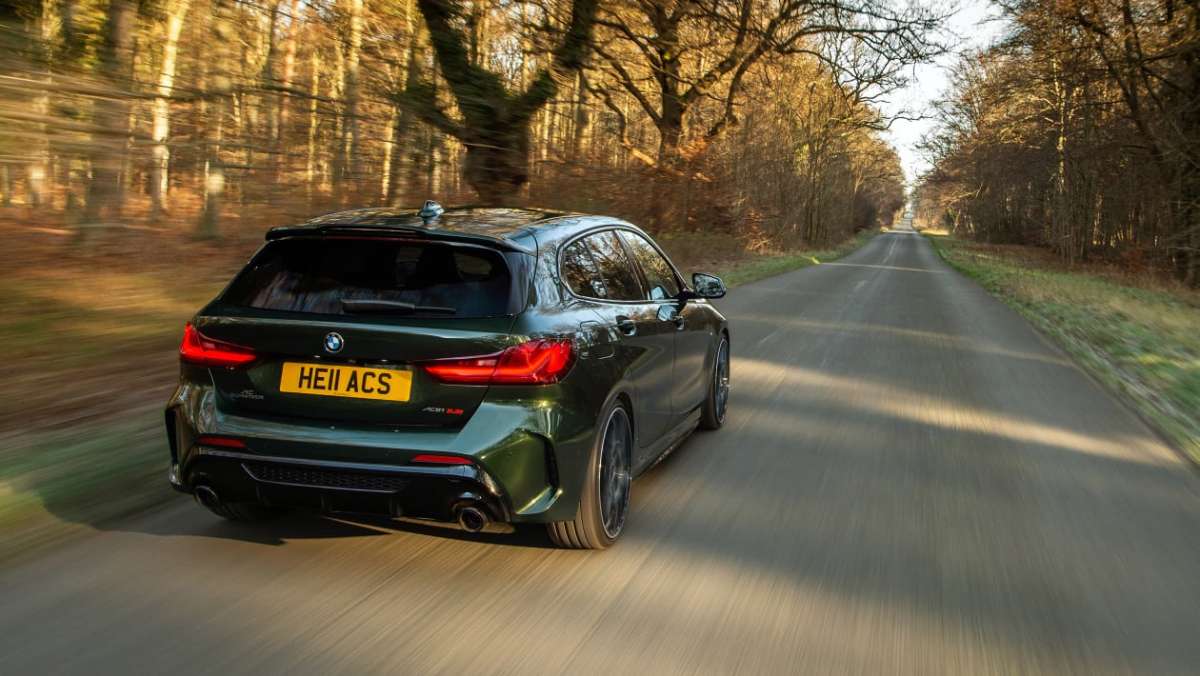 The new M135i is not like the old M135i. My neighbour has the old model and often fires it up at 7am as he heads off to work. I don’t mind at all because it’s the most wonderful-sounding alarm clock. There’s so much soul in the low growl of the 3-litre straight-six, so much character, that I often entertain thoughts of owning an M135i just for how it sounds. Well, that and the fact that its 321bhp is delivered to just the rear wheels.

The latest M135i is a completely different animal. It has a 2-litre, four-cylinder engine, installed transversely and powering the front wheels, mainly. It shares its floorpan and running gear with its stablemate, the Mini Countryman JCW All4. And given that the JCW is a chunky ‘Mini’ it’s no surprise that the M135i xDrive is no lightweight either, coming in at 1525kg, which is almost 100kg more than the crooning straight-six model, and with fewer horsepower, too. Not so much progress as a shift in direction, then. But plenty of scope for a tuner, right? You’d think so.

Standing at our rendezvous point near Thetford in Norfolk, with the early morning sun streaming through the trees and melting patches of ground frost, the ‘San Remo Green’ AC Schnitzer ACS1 looks fantastic: lower, with bigger wheels filling its arches and subtly more aggressive aero. It takes the attractive, low-line look of the standard M135i and gives it serious attitude.

The surprise is that AC Schnitzer offers no performance uplift. This is because the eight-speed Aisin auto gearbox (no manual is offered by BMW) is almost at its limit with the standard engine outputs of 302bhp and 332lb ft of torque. Pragmatically, the time-served German tuner thought there was little point in offering a remap that gave an uplift of only 20bhp. So while it looks the part, there’s no way any M135i is going to take on the hottest of hot hatches, the 415bhp Mercedes AMG A45 S. Well, not without significant re-engineering.

There’s even a limit on what tuners can do to make the M135i sound more interesting because it’s fitted with GPFs (gas particulate filters). They rob the exhaust of a lot of character but they can’t simply be bypassed or removed because the resulting lower back pressure triggers an engine warning light. So is there enough unexploited potential to make a compelling tuned car of the M135i? I had my doubts but it’s good to report that even up against such constraints, AC Schnitzer has turned a car designed to satisfy a broad range of customers into one that will satisfy exacting customers.

As a demonstrator this example is fitted with most of the available options, including the subtle addition to the rear hatch spoiler and the more prominent front splitter, which is said to be tougher than the standard item. Inside there are aluminium pedal finishers and replacement shift paddles. These are thin aluminium, finished in black with red printing, and to me they look like development parts with a temporary finish.

The main part of the kit is the revised chassis, of course. The package of ‘RS’ suspension parts developed by AC Schnitzer is based on the ‘Variant 3’ components from suspension specialist KW and replaces the original springs, spring seats and dampers, whether they are BMW’s passive or adaptive dampers. The Schnitzer kit is passive but offers multiple tuning options, including compression and rebound damping and spring seat height.

I’ve never met Manfred Wollgarten but in about 16 kilometers’ time I’m going to be a big fan of his work. AC Schnitzer credits the chassis spec to Wollgarten, who is Schnitzer’s technical manager and a seasoned touring car racer, and says it was developed on the road and at the Nürburgring Nordschleife. His recommended fast-road set-up is a ride height between 20 and 30mm lower than standard and damper settings just shy of halfway between softest and firmest (there are 15 clicks on compression and rebound damping).

Long-standing local importer Rossiters, based near King’s Lynn in Norfolk, try the cars with ACS’s recommended settings and occasionally tweak the set-up, perhaps raising the front ride height a few millimetres for our bumpier roads, but this M135i is set to factory spec.

A key part of the package is the ACS road wheels, a new flow-formed design described as being between a cast and a forged wheel. They’re 20 inches in diameter and look even bigger thanks to spars that extend right to the edge of the rim. They weigh 11kg each, making them lighter than the standard 19-inch rims, and complete with tyres they save a useful 1kg per corner in unsprung mass. Wrapped around them are Michelin’s finest: 235/30 R20 Pilot Sport 4 Ss that, in combo with the wheel, appear to have hardly any sidewall.

It’s barely above freezing and the roads are damp or wet in places but the ACS1 treads confidently, exiting corners with no wheel slip. This is not a big surprise because xDrive always seems to be one step ahead of any wheelspin, seamlessly sending drive to the rear axle when the traction load needs sharing. The system can send up to 50 per cent of the drive to the rear axle, though the little bit of tail angle shown in some of the shots here is lift-off oversteer, illustrating the ACS1’s benign adjustability.

It’s not just the traction that’s good: corner grip is strong too. Sensational, actually, considering the conditions. Confirming just how grippy the ACS1 is requires a bit of a leap of faith though, because there’s not much detail coming back through the steering wheel. Commit, carry the speed and it’s remarkable just how much grip the ACS1 finds; the Pilot Sports just key into the surface and haul the car round without triggering the stability control.

‘Fast not hard’ is AC Schnitzer’s motto and despite appearing to have little in the way of tyre sidewall, the ride is superb. There’s not much roll and wheel travel seems limited, contributing to a feeling of great composure, yet even over difficult backroads there’s no agitation, no matter how gnarly the asphalt gets. And your confidence is bolstered by a lack of thumps or rattles that suggests the base M135i provides a sound structure for the suspension to work from.

Indeed, these enhanced dynamics blend well with the standard car’s attributes: you sit low in excellent seats, in a solid, well-built car. It feels like a top-quality item.

But is it fun? We’ve said the standard car is rather anodyne. Well, the ACS1 is properly engaging hacking across country. The tautness of the chassis gives a feeling of connection with the road that doesn’t make up entirely for the lack of feedback through the steering but gives you something useful to work with. Select Sport, use the paddles and you add another layer of control, with crisper, consistent throttle response.

This is an engine with very little turbo lag that does its best work in the mid-range, so self-selecting gears lets you keep it there, working the torque, short-shifting with the throttle loaded for lip-smacking upshifts. The ‘TwinPower’ 2-litre four has a single turbo with an efficient twin-scroll design, and while it’s 19bhp down on the old 3-litre straight-six, it delivers the same peak torque figure. It feels like it’s a flat-topped torque curve too, the push strong from not much more than 1500rpm to beyond 4000rpm.

The M135i feels gutsy and fast, then, though there’s not much point in hanging on right to the limiter, because the delivery wanes and the limiter is soft, making the last 500rpm or so properly anti-climatic. A hard limiter set 250rpm earlier would transform the feel of the top end. While it doesn’t offer a full exhaust, Schnitzer does offer a new back box with carbonfibre-trimmed tailpipes. It’s a bit lighter than standard and a bit louder too and brings some welcome character, drawing an encouraging, slightly fruity blare from the engine.

Sport mode may enhance the engine, but it doesn’t improve the steering. It merely adds weight, so it feels a bit stodgy, detracting from the clean, smooth and positive feel from the chassis. Select the ‘Sport Individual’ settings, knock the steering back to Comfort and the wheel feels more alive and responsive to small inputs, which marries well with the confident, calm chassis.

The range of adjustment offered by the suspension gives scope for a set-up optimised purely for track work. Rossiters is happy to offer this service but says that most customers tend only to increase the compression damping for trackdays. It’s no coincidence that the compression adjuster is the most accessible.

We’ve not been wowed by the standard M135i. The lack of a performance upgrade on this AC Schnitzer initially seems disappointing but the star turn of the ACS1 conversion is the uprated chassis, which makes the most of the standard engine’s lusty mid-range torque for confident, engaging and rewarding progress even on challenging roads. You’re not going to win any drag races with Mercedes-AMG A45s, but the M135i’s solid mid-range delivery means you’re rarely hankering for more performance, and the base car’s solid build combined with the conversion’s dynamics create a satisfying and convincing fast hatch.

Most customers pick and mix rather than going for everything, says Rossiters, though you can have a new car delivered with the complete conversion. The full upgrade costs just shy of $14k including fitting and painting, which means that an ACS1 M135i like this one is a $58k car. As the minimum, I’d go for the chassis ($3000) and wheels and tyres ($5100), to which you need to add fitting. For those just after the look of ASC1, a set of lowering springs is available for $450 plus fitting, but for anyone who loves to drive, this misses the point.

Yes, it would be great to have even more steering feel and an engine with more power – or just a crisper top end – but as it is the ACS1 turns the rather lacklustre standard M135i into one very well sorted and satisfying 1-series. Mission accomplished.