crankandpiston grabs a quick word with World Rally Championship runner Khalid Al Qassimi to discuss his new role with Abu Dhabi Racing and the Citroen WRC team, his FIA Middle East Rally commitments and his Dubai International Rally ‘jinx’, and why Britain in December is no picnic.

Just to give this interview a little context, the gentleman sitting opposite me has competed in more than one hundred rallies both regionally and as part of the World Rally Championship program. He has a contract with a WRC works outfit in his pocket for 2014, is a twice-recognised FIA rally champion, and was at one point teammate to two-time World Rally Champion Marcus Gronholm. And despite a hectic schedule today (with demonstration runs of the 2013 WRC Citroen DS3 at the Yas Marina Circuit among his commitments), Sheikh Khalid Al Qassimi of the Sharjah and Ras Al Khaimah ruling family has a hot topic he is itching to get off his chest.

“I have one goal, and it will always be to win the Dubai International Rally”, he explains. “It’s my home rally and I want to win it, so every year I am committed 100 per cent. It’s not enough to win most of the stages. The battle continues across the weekend and you’ve got to be there at the end.”

The last time Al Qassimi stood atop the Dubai Rally podium was in 2006, one year on from his first victory on the event. Since then though punctured tyres, engine issues and the occasional high-speed accident have dented his progress, runners-up spots in 2007-2008 being the only silver linings. After yet another DNF in 2013 (a double puncture on the final day thwarting his efforts), Al Qassimi is beginning to re-consider the approach to his jinx event.

“Seven times I’ve had an incident on Dubai Rally”, he continues. “Something always goes wrong. But I always think of the positive side of things. We had a good charge during the final day so the pace is definitely there. Or perhaps maybe one year I shouldn’t think about winning. Maybe I need to just finish it!” 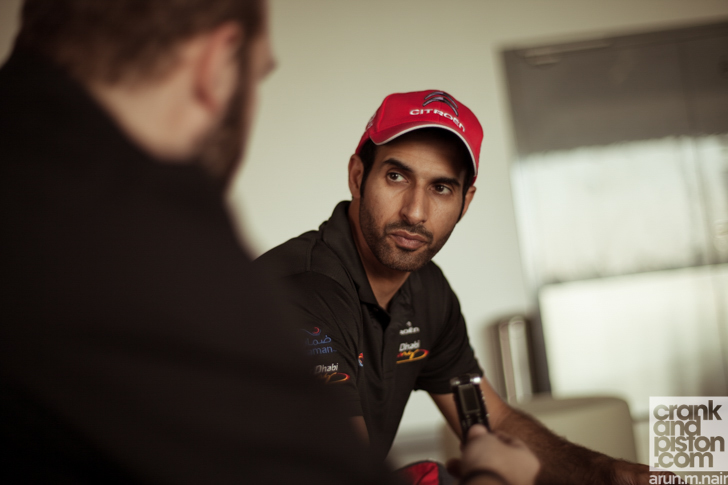 It’s an inconsistency that, to be fair, doesn’t hold true of Al Qassimi’s WRC career: since making his Group N debut on the 2004 Acropolis Rally, the ’04 FIA Middle East Rally Champion has retired from only six rallies, two of which were in his first year. Given the high-attrition rate rallying habitually boasts, it’s an impressive statistic. Similarly notable is the fact that Khalid Al Qassimi has now driven for two different WRC works outfits, the first Emirati ever to do so. After five years with the Ford World Rally Team (four of which were with Abu Dhabi sponsorship), the 2013 season marked Al Qassimi’s first with Citroen. There’s still plenty of work to do – his best finish was a pair of ninth places – he assures crankandpiston.com the jump between ships is a positive one.

“I love the [DS3], and it’s a proper factory car if you compare it to the Ford”, Al Qassimi continues. “I’m not downgrading the Fiesta RRC, but the Citroen works so much better with the driver. You work a lot to make it suitable because it is very sensitive and the chassis needs a lot of work. If you change one small thing, the car can react completely differently, and you cannot find that out until you’re against competition. So yeah, it’s good in a lot of areas and it’s really helping me learn.” 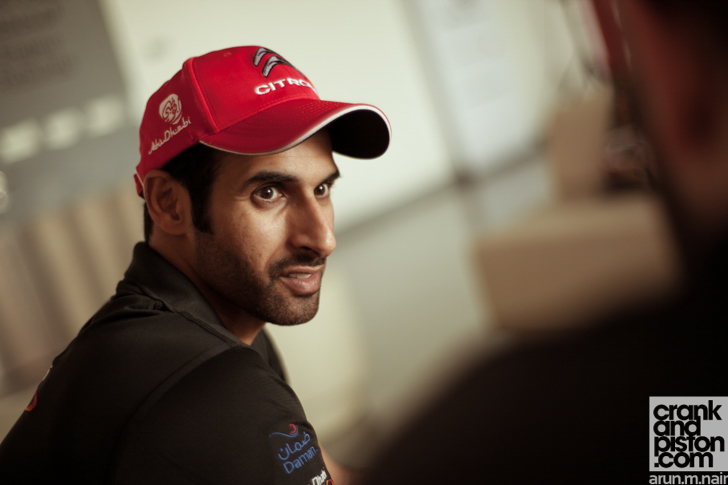 In some ways, the Abu Dhabi Racing agreement came one year late. This year series titan Sébastien Loeb (who won all nine of his WRC crowns with Citroen) bade farewell to the sport with two victories on Rally Monte Carlo and Rally Argentina, a second-place in Rally Sweden and a spectacular barrel-roll on home turf on Rally France. None of which Al Qassimi contested. Though the opportunity to work closely with Loeb slipped through his fingers, the Frenchman’s influence at Citroen remains strong.

“Sébastien is still a big part of the team, since he will be doing a program with Citroen in the World Touring Car Championship next year. And for sure, if you have an asset, like Sébastien Loeb, then you’re going to benefit from his knowledge of the setups and his experience. We’ll miss him at the rallies but he’ll still play a big role with Citroen.”