crankandpiston grabs a few words with three-time EnduroCross Champion – and current KTM and Red Bull rider – Tadeusz B?a?usiak at the main KTM Showroom in Dubai to discuss his first assault on the Abu Dhabi Desert Challenge and a hectic 2013 calendar. 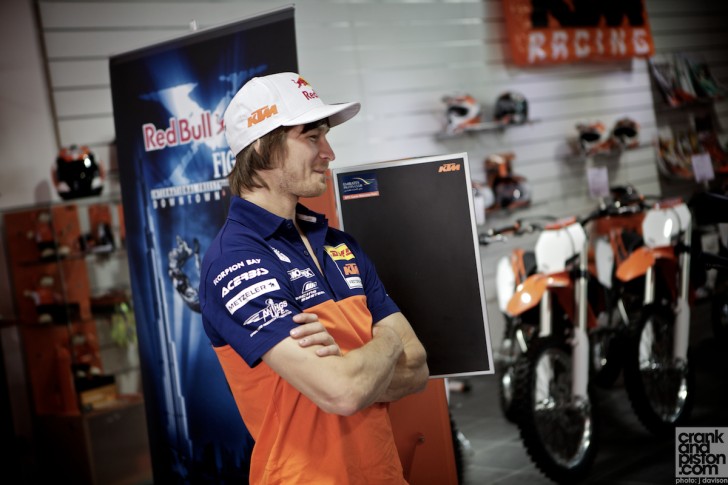 This past week we have seen competitors from across the globe take on the Abu Dhabi desert Challenge, and the various pitfalls, punctures, and assorted calamaties that can strike without trace. None of these however stopped KTM rider – and three-time Dakar winner – Marc Coma taking his seventh win on the event in the bike category.

A little further bike, his KTM teammate Tadeusz B?a?usiak was making his first run on the sands, and has ambitions to return to the Middle East perhaps as soon as next year. There’s rather a lot he needs to get done in the meantime though.

Sparing a few words for crankandpiston, ‘Teddy’ explains how important his run in the Desert Challenge was, why the X Games is ‘the big one’ this year, how much support he has received from KTM and Red Bull, and why breaking most of the bones in his face in 2008 didn’t stop him jumping back on the bike. 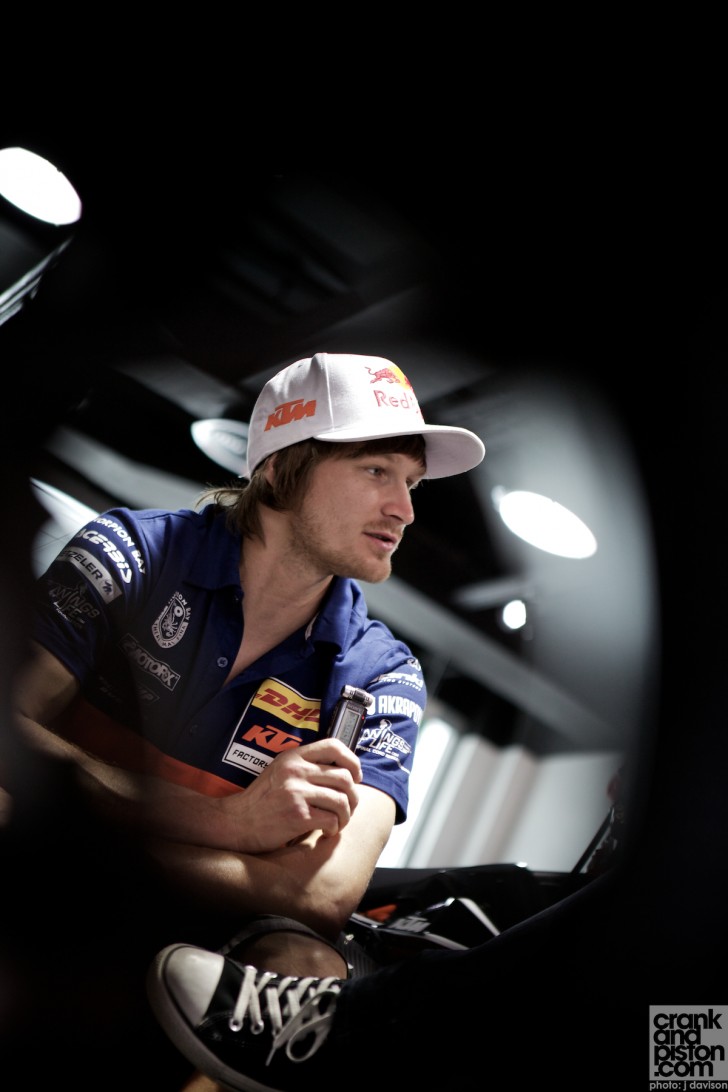 Tadeusz, this month you made your debut on the Abu Dhabi Desert Challenge. Why don’t you start by walking us through your take on the event…

“For me it was a new thing. I’ve been racing endures and motocross for ages, so I’m pretty used to all challenges, but I’m just starting my ‘adventures’ with cross country rallies. I mean the Challenge this year was all about having fun and trying something different. Y’know, riding the bike fast is one thing and I know how to do that, but riding and navigating and using the GPS is something really new for me. 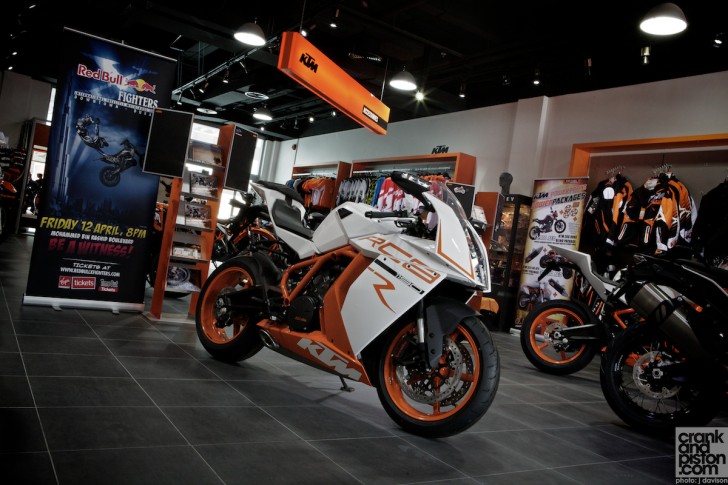 Was there a particular game plan you had in mind beforehand?

“Not really. The event is a marathon, so the strategy is completely different to sprint racing which is what I’m used to. But I also had no expectations. I have so many races coming up and I need to do well in: to deliver for sponsors and teams, right. Of course as a racer I wanted to be competitive, but doing something stupid on the sand would have been…well, stupid! I wasn’t expected to win, and for me it was all about having fun on The Challenge.”

Is it an event that you’d consider returning to in the future?

“It is something for the future maybe, but I don’t know when. Of course you always want to try and go as fast as you can but try and stay in your comfort zone. It was always about not taking too many risks and working on what I can do to improve for the next one. So yeah, we’ll have to see.

“I feel very comfortable on the sand and I’m quite fast too. But of course the event is not just about the speed. It’s about jumping the dunes and reading the terrain. It was a big learning experience!” 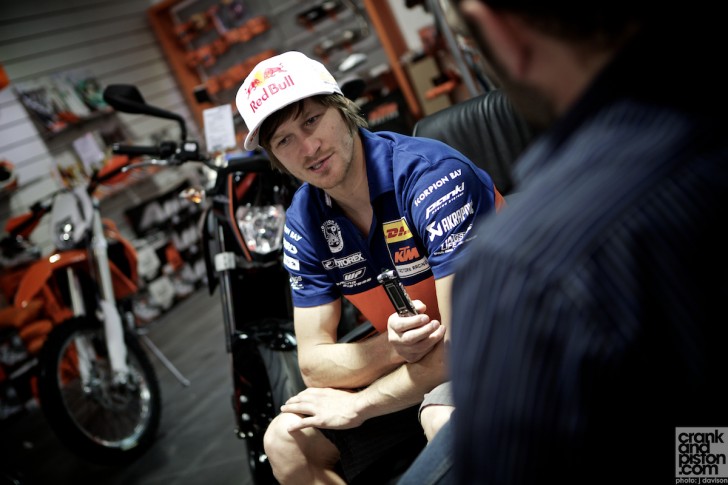 Let’s take a quick look at your resume: a two-time winner of the Hell’s Gate Extreme Enduro Championship (2008-09), Indoor Enduro World Cup winner two years in a row (2010-11), a three-time Endurocross Champion (2010-12) as well as the reigning SuperEnduro Champion. There’s some pretty impressive achievements listed there…

“Yeah, and I’m very proud of them. I’ve been racing bikes all my life. I’ve won quite a few championships and quite a few big races, and I’m, getting ready for X-Games right now. In fact I’ll only be back at home for three days and then I’m off for the first leg of X Games. So it’s going to be pretty busy for me, but still I came here to The Challenge to mix it up a little, ride a bigger bike, and learn some new stuff. I guess that’s the most important thing. As a rider, you want to keep getting better and better everyday, so if you don’t have that desire to be a better rider than that’s the end for sure.”

You mentioned that the X Games, freestyle extreme sports event since 1995 run by ESPN Sport braodcasters, is a big event this year. In fact, you yourself took a gold medal in 2011. Presumably in 2013 you won’t be aiming for anything less…?

“X Games is huge! Y’know, it’s the same discipline but it brought endure cross in a few years ago, and that’s one of the biggest events they’re running now. It’s growing very well, getting bigger and bigger. And I’m looking forward to racing the global X Games too. It’s a been a big event for Los Angeles but now ESPN has decided to go global. So for the first time ever we’re going to race in Brazil, Spain and Germany, and the US. That’s going to be very exciting.” 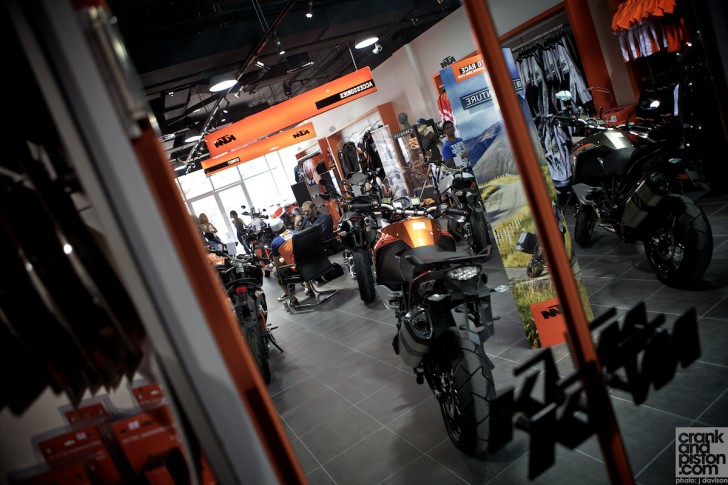 Does the increased media coverage of the event concern you, as a competitor under the spotlight?

“Well to be honest, I’ve been around for so many years, and know how to handle pressure. So no, I don’t really feel any added pressure of people watching on TV live. I know what I have to do, it’s my job, and I’ve got a really good team behind me. I’m fit and I know what I can do on a motorbike. So I’ll just wait for the gate to drop and always try to be the first guy in the first corner.”

We’ve spoken with a few Red Bull athletes in the past on crankandpiston, and they’re very aware of the ‘show’ aspect that comes with that: Mad Mike Whiddett was a particular enthusiast of that. Would you say that is the case?

“Well as a racer, it’s not that much about the show. I mean, it is, obviously, because we want to give the fans something to cheer about and give them a special memory about the race. But for me, the most important thing is to be the first guy into the first corner, keep it clean, and just try to be the fastest guy on the track. It’s more about that than the show. Of course, when the job is done, then it’s about giving something extra and spending as much time as you can with the fans, but first…let’s just say, when it’s time to do the job, it’s time to do the job.” 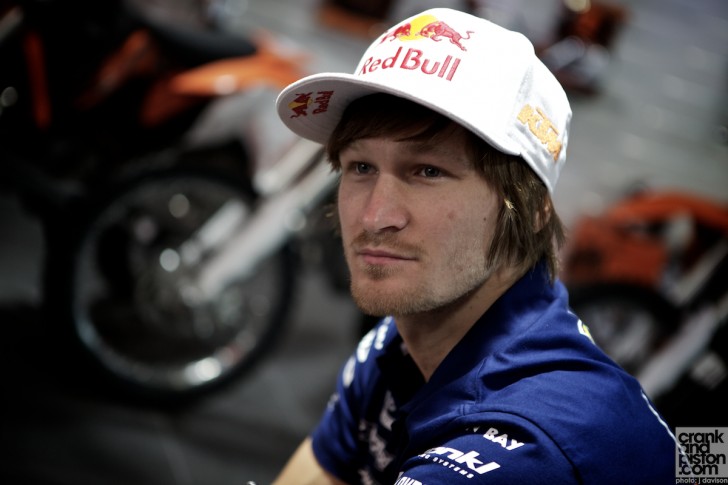 As a professional Red Bull athlete, how difficult is it keeping up with such a hectic schedule? Presumably getting burned out is a particular worry?

“Well I’ve been a pro-athlete for years now, and I’ve been travelling for so long that I’m used to it. I work quite hard in the off-season…I mean my off-season is actually pretty short(!), but we ride a lot and work out a lot. So physically I feel great. On the other hand you’ve got to keep it fresh, mentally y’know. It’s really easy to get super stressed. But I know how to handle that.”

You mentioned that you travel a lot. Is it difficult being away from home for such a large amount of time?

“Well I’m so used to it now. I don’t even live in Poland anymore, I live in Andora. I go home for Christmas sometimes but I haven’t seen my hometown in quite some time. I love travelling, seeing new place and meeting new people, and racing all over the world. And I’ve really enjoyed my trip to the UAE and Abu Dhabi.”