At this weekend’s US Grand Prix, Lewis Hamilton could be crowned world champion for the third time. We catch up with one of Britain’s most popular F1 world champions – Nigel Mansell – to discuss the pressures of fighting for the title, his hatred of F1’s tech-heavy cars, the return of the Mexican Grand Prix and whether modern drivers are talented or just super rich. 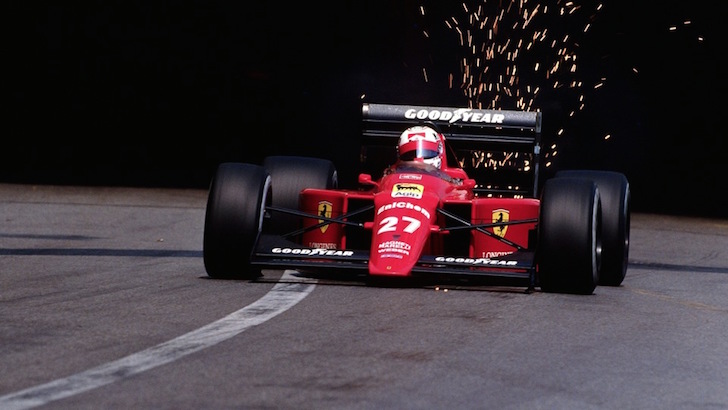 For Formula 1 fans, Nigel Mansell needs little introduction. The Briton and his famous moustache entered 191 F1 grands prix, winning 31 of them and featuring on the podium 59 times. He was world champion in 1992 with Williams, and during an F1 career that spanned 15 years he also drove for McLaren, Ferrari and Lotus. As if that wasn’t enough, he also found time to win the IndyCar championship in 1993.

To the Italian tifosi he was nicknamed Il Leone, or The Lion, for his tenacious driving style and fierce competitive streak. To the Brits, he was simply Our Nige.

Now 62, Nigel has written a new autobiography – Staying on Track – and crankandpiston.com caught up with him in the UK as he was about sign copies for enthusiastic fans. 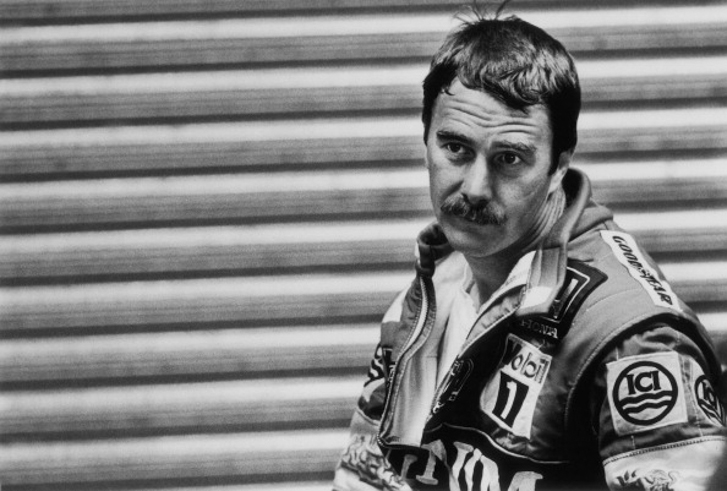 “I’m doing good! You’ve got a hard act to follow as I’ve had a lovely young lady talking to me. We’re just about to do a great signing…”

…called ‘Staying on Track’, I believe. You’re written several books before, so tell us about the new one…

“It’s all new material, pretty much, and a fantastic comparison to how the cars were back in my day compared with the present day. It’s a hands-on book by myself and a great ghostwriter that I use, and I’m really thrilled that all the words are mine and we’ve had total control over it. We started it just before last Christmas, but it covers fifty years plus, there are things that start at the very beginning. It’s a fantastic read, so I’m told, and we’re very thrilled that it’s in the UK top 10 list at number seven, so it’s a bestseller already. So we’re seventh on the grid but I expect to do a better time next week!” 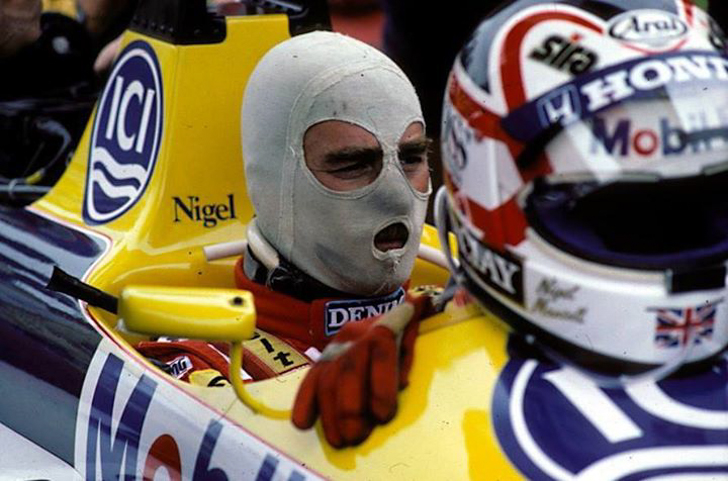 What takes up most of your time, now that you’ve retired from racing?

“The last number of years, around 16 years, I do an amazing amount of work for UK Youth which is a charity that has been operational for 104 years. We reach up to a million children in any one year and if the teachers or parents are not there for the children then UK Youth is. We help support, educate them and empower them to make better life choices. If they’ve got the education and information then they’re in a position to choose to do the right thing. I’ve been president of it for 16 years and took over from the Duke of Westminster. It’s a pretty awesome responsibility, bearing in mind that all previous presidents have been members of the Royal Family. I’m the first non-blue blood president, and I’m very proud of that and work very hard to facilitate as much support as we can.”

How involved are you with the world of F1 these days?

“Well, I’m going out to the Mexican Grand Prix because they’ve named a corner after me over there, and I’m working for the government and main promoter. I’m an FIA steward, and I sit on the board of the drivers’ commission for the FIA, so I’m quite heavily involved with motorsport generally.”

Do you miss being in the car?

“Yeah, absolutely. But the one thing that you can’t get away from is that we all age, and some of us age a bit sooner than others. I’m just a couple of years too old to give Lewis [Hamilton] a run for his money.”

You say that, but you’ve been quoted as saying you’d be as fast as Lewis, given a bit of practice…

Could we tempt you to put your money where your mouth is…?

“I never have a problem going quick. I’d make sure my engineers were working on the car so no fiddling’s going on.” 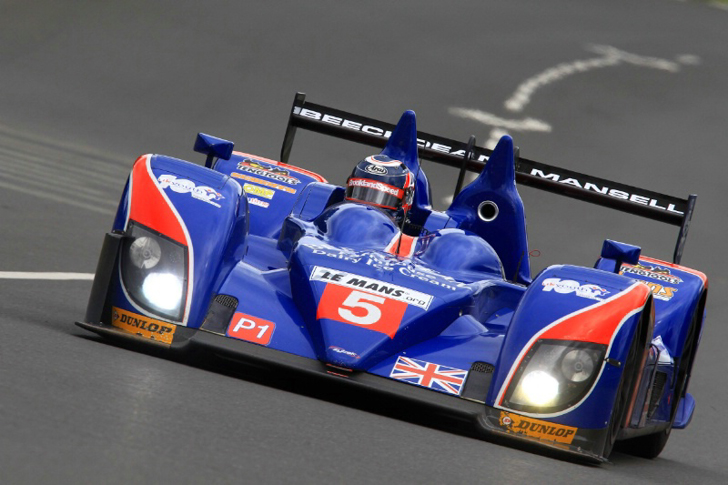 We saw you a few years ago racing with your sons at Le Mans. Were you ever tempted to try that again?

What are the biggest differences between F1 now and in your era?

“Well, you need to buy my book, my friend! If you’ve got a couple of hours I can tell you, but really quickly there’s significantly many, many differences. I’d like to see the drivers get the car in a better situation, where they can offer input to the car rather than the car dictating to them how to drive all the time.”

Are you not a fan of the increasing electrification of motorsport then?

“When you have 350 different settings on the steering wheel, the answer’s emphatically ‘no’. When you’ve got 30 to 50 engineers telling the driver how to drive the car, you need to put the power back to the driver to drive.” 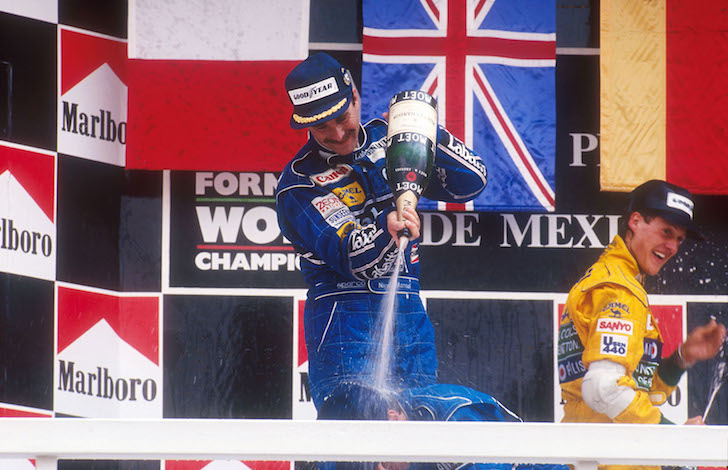 F1 critics often say there are relatively few talented racers and lots of average but rich racers these days. Is that true?

“No comment! [laughs] I’m old enough and wise enough not to go there, thanks very much. Let’s put it this way, I probably wouldn’t disagree with what you just said.”

Let’s talk about the return of the Mexican Grand Prix on November 1. It’s a corner you’ve raced at before, so what are your memories of racing there?

“Yeah, it’s fantastic. I’ve won there twice, and won the last race there in 1992. I have wonderful memories and I’m looking forward to going back and visiting all the fans, and seeing a great race. Hopefully Lewis will clinch the championship there.” 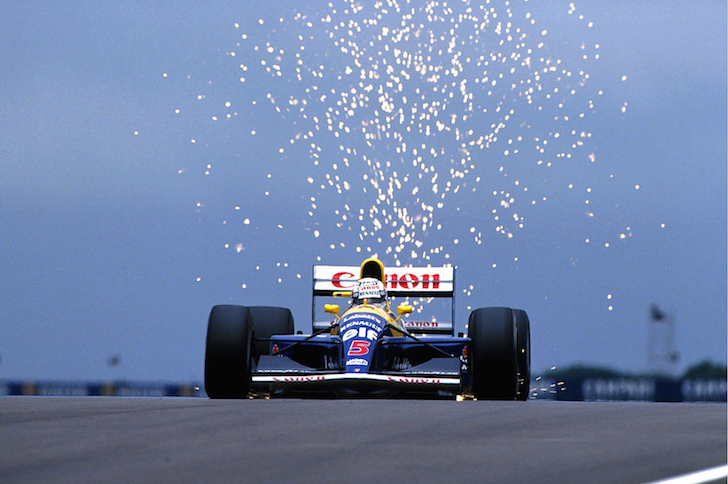 You could argue that Mexico is one of the classic F1 tracks. There has been lots of talk about losing some of Europe’s classic tracks because so many new ones are coming in. What are your thoughts on that?

“Obviously the heritage of racing in Europe is so historic it would be a great shame for anybody to loss a Grand Prix. But in the evolution of Formula 1 around the world there can only be so many races per year and it’s for the powers that be to decide what’s best placed for F1. Really, as a racing fan, I’d like to see the tracks stay very similar, but I fully understand if things have to progress.”