A (Not So) Quick Chat with… Allan McNish

crankandpiston catches up with three-time Le Mans winner Allan McNish to discuss victory on the grandest stage, the significance of American sports car racing, why Formula 1 is difficult to get right, and why a 280kph crash at Le Mans was actually a good thing. 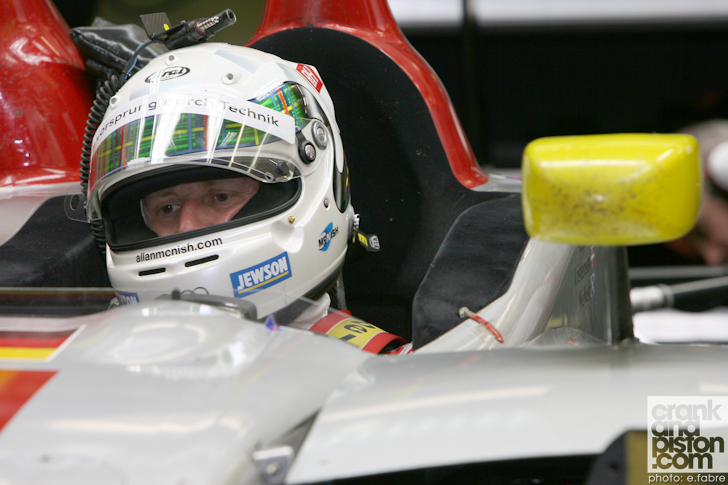 Take a cursory glance at Allan McNish’s career and you’ll see highs and lows in almost equal measure. A ‘wide and varied’ motorsport career – as the Scot puts it – includes three wins at Le Mans with almost a decade between the first and second; six seasons of Formula 3000 (now GP2) with only two wins to show for it; a Le Mans drive with Toyota in 1999 knowing he was out of a job the following morning; a Formula 1 career that ended upside down at Suzuka; and a win record at Sebring that betters both Stirling Moss AND Juan Manual Fangio, but with no avenue to return in the near future.

Forget ‘press speech’. Allan has no problem shooting from the hip, much to our delight.

It’s worth pointing out at this juncture that crankandpiston’s interview with Allan took place before Allan Simonsen’s fatal accident. There are consequently no references to this throughout the conversation. 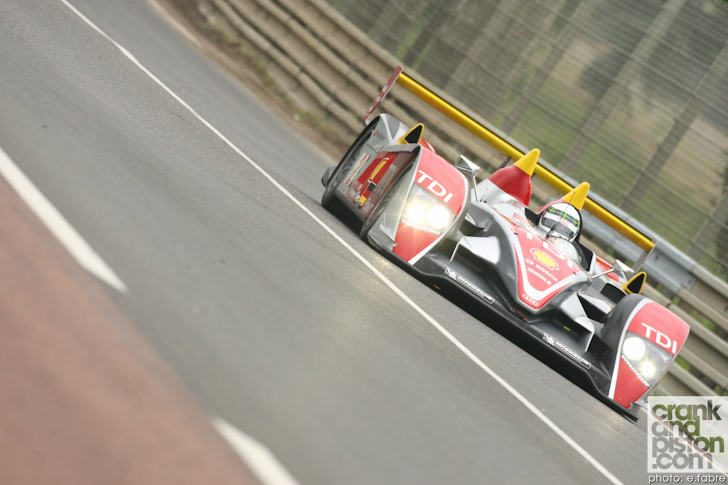 For sure, anytime you stand on the top step, it’s a big celebration, there’s no question about it. Le Mans obviously being the big one. But when you look back and you have a record that’s quite strong – I think we’re quite fortunate at Audi that we’ve had a chance to have a crack at these races – I personally don’t really look back too much and think of the numbers. I look forward and think about what’s going to help us win the next one.

Well I hope you’ll make an exception, otherwise this will be a very short interview.

[Laughs] Okay, yeah, when I hang up my helmet, I’ll look back on it all in a slightly different light and, yeah, I’ll be very proud of the achievements whatever comes between now and then. Certainly I feel up to this point it’s been pretty good. 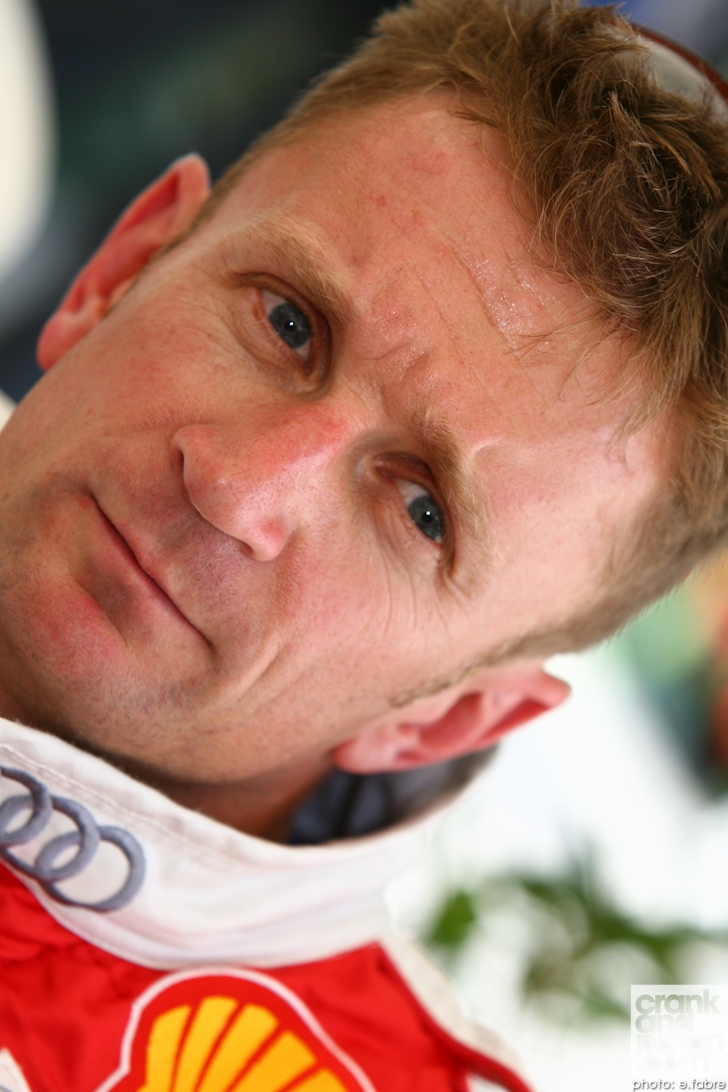 It’s a career that had its highs and lows in the early days. In 1988 you won the now defunct Formula Vauxhall championship and came close taking the British Formula Three Championship against your old sports car mate David Brabham. You then made the step up to Formula 3000 (now GP2) and took two race victories in your first full season in 1990. But the momentum never really got going.

You can probably look at it in different ways. At the time when I was coming through I was five years younger than most people, because I happened to win in every junior category and moved forward. So I probably got to the top a little bit too early in a way, especially in Formula 3000. I suppose the turning point is that I was ill going into the 1991 season, and it took a long time for me to recover from that. It was almost a year before I had the strength again. That was also at the time when the Lola chassis – which DAMS was running because we were the works team – was a bit of a dog, and basically got caned at every race. It didn’t win a race all year in any hands, that was with drivers like Damon Hill [1996 Formula 1 World Champion]. So as a whole, it was two things on the back of each other. And y’know in motorsport, when the momentum goes, it’s very difficult to get it back up and running again.

So I started looking at different things, simply to show what I could do again. And that came in an IndyCar test for a race seat, which ultimately went to Mark Blundell [with PacWest Racing in 1996]. But from that came Porsche and the opportunity with them to go and test the GT car, which was effectively like an LMP1 car. And I just twigged with that, and Porsche came back and said, ‘yep, we definitely want you’.

Suddenly the momentum was back?

That gave me a lot of confidence again and was a big turnaround for my career. And a good message for young drivers. I mean, when opportunities came up, every time I thought, ‘oh Christ, that door’s closed’ or ‘argh, this isn’t going to work’, then suddenly something else happened that was a bit left field. And then bang! What you thought was the best opportunity in the world had gone away from you, then the next thing that happened was even better. It was definitely not your standard career path, but it was definitely one that has been wide and varied shall we say! And pretty bloody entertaining along the way. 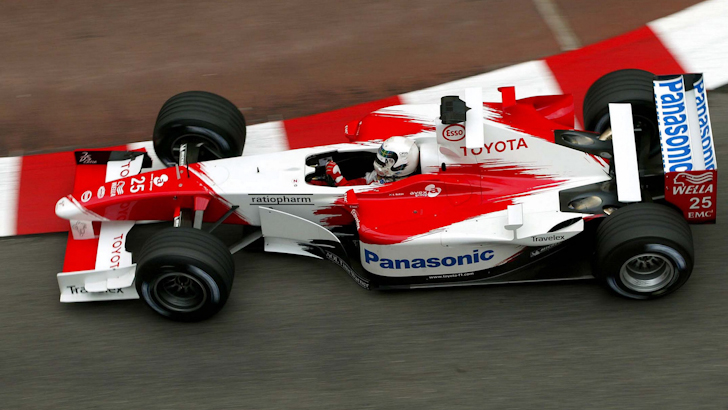 It led to a pretty lucrative career at Le Mans, Sebring and the American Le Mans Series. But I’ll come back to that because I’d like to talk about your time in Formula 1 if I may. Let’s start with the basics: how did it come about?

Basically at the end of… [pause]… let me get the years right!… [pause]… at the end of 1998, we’d won Le Mans and Porsche pulled the plug on the programme. Then two weeks later they said, ‘no, we’re actually going to come back in 2000, and we’re building a new car’. So I signed a three-year agreement with them to test in 1999 and race in 2000/01 with options beyond that. In ’99, because I wasn’t doing very much, they said I could go and race with whomever I wanted. So I went to Toyota for Le Mans. My contract with them ended the day after the race, and that was it. I was back with Porsche getting ready for 2000.

Then towards the end of the year, we tested the new car once and Porsche canned the programme again. At the same time Toyota asked me if I was interested in doing Formula 1. I thought ‘right, I’ve got an opportunity with Toyota and F1 I need to grab, because if I don’t do it, I’ll regret it’. I was also pragmatically of the opinion that if it worked I could move forward, and if it didn’t there’s always strong opportunities back in sports cars: Audi was just coming in. So I took Toyota’s offer and ran with it.

Well that’s the thing, we actually started off really well. That was the problem! Mika [Salo, teammate Toyota F1] finished sixth in the first race – I was caught up in that big first lap incident – and then I finished seventh at the second race in Malaysia, which would have been sixth but there was a mistake at the pit stops where they took my tyres off and put old ones back on because Mika had been in about 20 seconds earlier. It was just one of those new team blues. Then Mika had a strong run in Brazil and finished sixth again. But after that the development of every other team went sky high and Toyota’s stayed the same. They were a team coming in and didn’t appreciate the speed and requirement of development through the season as well as building a new car. Basically our car stayed the same from the beginning to the end of the year, whereas everybody else improved week on week. And so slowly we went from finishing in the top ten – which we did quite a lot, and points were only given down to sixth place – until it came to the end of the year when it was a struggle to be anywhere near the top ten. 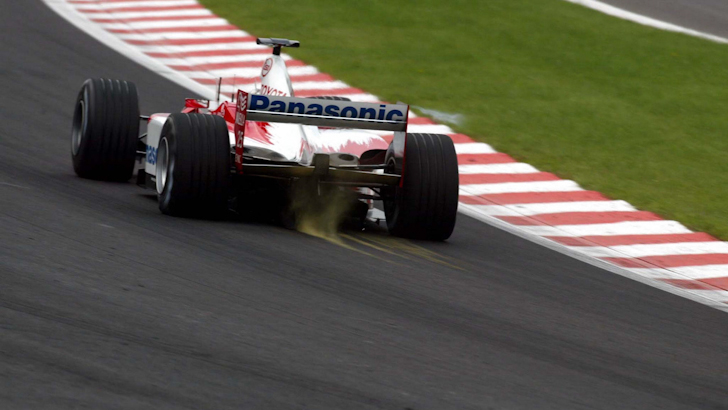 Your season ended with a DNS at Suzuka after a massive accident in qualifying at 130R. Quite incredibly you were back in the car for morning warm-up.

You get back in the car and you drive. Simple as that. I mean it’s just the law of averages. If you’re on the limit for a period of time, at some point you’ll go over the limit, and these things happen” – the significance of Allan’s words ring true post-Le Mans following the tragedy that befell Allan Simonsen – “You just get back in the car and get back on with it. The day you don’t is the day you hang up your helmet.

So both Mika and yourself left after one year, Olivier Panis and Cristiano Da Matta came into Toyota, and you spent a year on the sidelines with Renault in 2003 as their test driver. Was a year out of competition difficult to handle?

Ah, it wasn’t quite like that to be honest. At the end of 2002, Flavio [Briatore, then-team boss at Renault] called me and said, ‘look, we’re doing this Friday testing agreement, and we want you to be the reserve driver’. When Fernando [Alonso] had his shunt in Brazil, he was okay as it turned out after he was checked at the hospital but otherwise I’d have been in the car at the next few races. So it wasn’t necessarily a case of frustration, I knew exactly what I was getting into. When I drove the Renault, I realised what a Formula 1 car could actually do: my first lap for example in the Renault at Barcelona was quicker than my qualifying lap in the Toyota. It was just a massive step, a world of difference, and it reminded me of something that I’d probably forgotten a little bit. The gap between the guys at the front and the guys in the middle who want to be at the front is just huge. Absolutely huge! And I didn’t really want to be qualifying 15th with a team that struggled to make developments and do the job correctly. If I wanted to do something I’d prefer to be at the front. If it wasn’t possible to be doing that in Formula 1, it was very clear that I’d prefer to be doing it somewhere else.