A classic reborn. TVR is back

One of the biggest names in British sports car is set to make a comeback. TVR, which all but collapsed in the mid-2000s, is being revived by its latest owners, in collaboration with the man behind the iconic McLaren F1.

TVR has been working for the past year with Gordon Murray Design and engine-builders Cosworth to build an all-new sports car by 2017, and plans to bring at least four new models to market over the next decade. The company says its positioning and pricing will be in line with TVRs of the past – expect a machine somewhere between $90,000 and $120,000.

Fans of the brand – and there remain many – could be forgiven for taking the news with a pinch of salt. A TVR rebirth has been announced before, most recently by its former owner Nikolai Smolenski shortly before selling the company, and nothing came to pass. TVR is now owned by a consortium of businessmen led by Les Edgar, a British millionaire who made his money from compuyter games, and if nothing else, the alliance with Gordon Murray and Cosworth is reason for optimism.

No official pictures of the new car have yet been released, but details are promised for later in the year. What we know so far is that the car will be in the mould of a classic British two-seat sports car, with a composite ground effect aero chassis and body package designed by Murray. Power will come from a front-mounted, naturally-aspirated and dry-sumped Cosworth V8, with rear-wheel drive and a manual transmission.

Les Edgar, who is sitting as TVR chairman, said: “We know that a new TVR has to be better than just good – it has to be outstanding. From the outset we only wanted to work with the best partners in the business, and both Gordon Murray’s and Cosworth’s track records within motor sport and high performance car design and engineering speaks for themselves. Together, we will deliver a truly exceptional new car.”

Edgar tried to quell fears that this could be yet another false start for the firm.

“We are a well-funded, well-supported organisation and boast a vastly experienced management team,” he said. “We are here to stay and we have a fully evolved ten year plan for product and business development, and are committed to deliver on all the targets we have set ourselves – as we have done to date.

“Despite very deliberately maintaining a low profile since completing the acquisition of TVR two years ago, we have had an enormous amount of unsolicited interest from businesses, individuals and investors internationally. Such is the strength of the brand and the passion of its followers. It is a real privilege to be a part of the revival of a great British marque – one that will succeed through our single-minded desire to produce exceptional sports cars.”

TVR was first founded in 1947 by Trevor Wilkinson, and built up a reputation for high-performance vehicles and innovative design. Cars like the Sagaris and Cerbera mean that even today, petrolheads get a small shiver at the mention of the name. We await with keen interest to see if this new incarnation of TVR can carry on that emotional legacy. 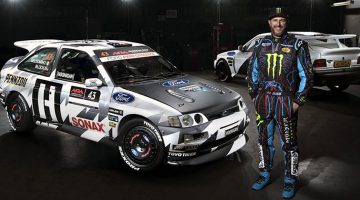