It’s been many a lunar cycle since I last graced these pages, and it was very rude to have departed without a final update on what happened to my then beloved Cayman S. Recap: semi-slicks + lots of rain + central reservation. Well the short story is that after a number of months, the Cayman was handed over to the insurance company who subsequently considered it a total loss, and the last I saw of the old girl was her looking very sorry for herself in a sandy parking area waiting for her next journey…..after I’d removed the huge Brembo brakes and Borla exhaust, of course.

In my last Journals offering I had shared my mixed emotions over what was next: should I slap on more modifications and produce a beast of a Cayman should she be heading home to me, or was it better for her to rest in peace and get something more suited to me, like a 997 GT3? 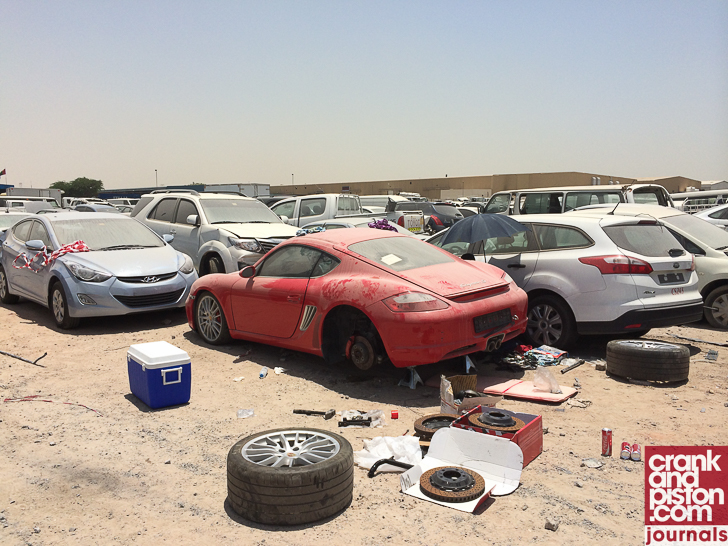 With the pittance the insurance paid out burning a hole in my pocket I spent many hours flicking through the classifieds in the hope a GT3 in ‘dream-spec’ would come up. It didn’t. However my good friend Ryan did have luck and purchased a GT3 in Bahrain, which just happened to be the perfect car (in my eyes). After six months of ownership he’d put a measly 600km on the clock, and subtle hints about how I loved the Porsche soon became “sell it to me”. Eventually he threw in the towel and agreed that she’d be better off with me.

So without much further ado, I introduce ‘Pumpkin’, a 2008 997.1 GT3, and in this case, as you may have noticed, she’s rather orange. She’s not just any old orange but factory order Paint-To-Sample (Read $$$) RS Orange, as offered on the early 997 GT3RS models, making it rather rare on the ‘normal’ GT3. Another not so common option is the rather epic fixed back carbon fibre bucket seats, which are lifted straight out of the Carrera GT, adding somewhat to their desirability. My dream spec is probably very different to many other people’s and so you’ll not find a leather clad dash, deviated stitching, or even a decent stereo (it’s pants if you were wondering). Then again with a GT1-derived Mezger 3.6-litre flat six hanging off the back, who cares? This is a proper sportscar and the only other item I wish it did have was a bolt-in rear roll cage: that was free with the Clubsport package but for some reason was not ordered by the original owner.

Originally registered in Bahrain, she seems to have spent most of her time here in Dubai with most of the service stamps coming courtesy of Porsche Centre Dubai. With only two previous owners, 18 months of warranty left and barely 19,000km on the clock, what was not to like? She’ll be in the stable for many years to come, I feel.

Previous ArticleLaFerrari vs 288 GTO vs F40 vs F50 vs Enzo. Hyper 5 follow-up
Next Article A Quick Chat (sort of) with…Lewis Hamilton