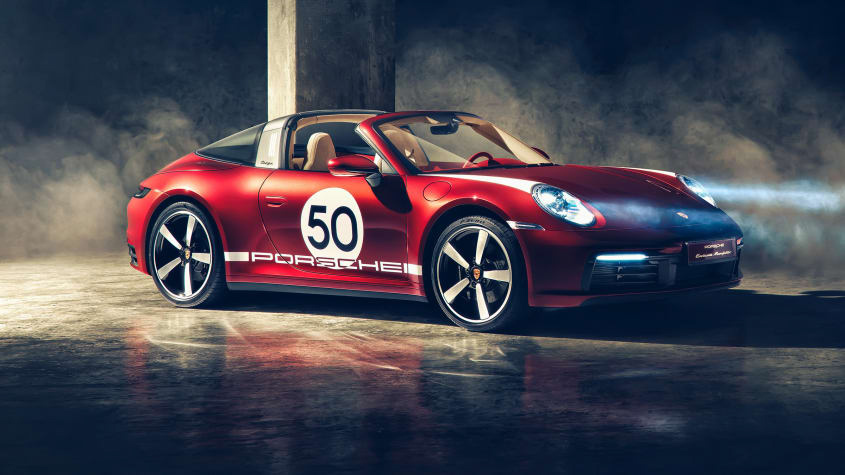 Porsche has revealed a new retro-inspired 911 Targa 4S Heritage Design special edition featuring a selection of bespoke design elements inspired by 911s of the ’60s and ’70s. Available exclusively in Targa 4S form, the Heritage Design edition will be limited to 992 units (referencing the current 911’s model code) and cost from £136,643, around £27,000 more than a standard Targa 4S.

The Heritage Edition’s bespoke features are entirely cosmetic, starting with the Cherry Metallic paintwork that is unique to this special edition and contrasted with a graphics pack on the doors and front wings. Four other exterior colours (Black, Guards Red, GT Silver and Crayon) are also available.

This palette is contrasted with gold badging at the rear and on the silver hoop, 20/21-inch staggered Carrera Exclusive wheels, black brake calipers (replacing the standard red units on steel-shod 911 brakes) and a Porsche Heritage badge located on the engine cover inspired by the one given to Porsche 356 customers in period that broke the 100,000km (62,000-mile) mark.

The interior features its own special touches, starting with a two-tone Atacama Beige and Bordeaux Red (or beige and black for those wanting a more subtle combination) OLEA leather interior complete with corduroy inserts in the seat centres and extended leather across the dashboard. The 911’s trim inserts, which usually feature stainless steel, carbonfibre or timber, are in this case also finished in leather, and feature a numbered model plate on the passenger side.

The unique finishes even extend to the roof lining, with the roll hoop and windscreen pillars finished in a bespoke perforated Alcantara referencing the perforated vinyl found in Porsches of the ’60s and ’70s, it too colour-matched in Atacama Beige. Even the 911’s dial pack has been subtly changed, with both the physical rev counter and Sport Chrono stopwatch featuring unique green backlighting, which is also mimicked in the 911’s digital displays.

What hasn’t changed is the Targa 4S’s chassis or powertrain, combining the standard model’s 444bhp 3-litre twin-turbocharged flat-six engine and all-wheel-drive system. Both the eight-speed PDK and seven-speed manual transmissions are available.

It’s not uncommon for Porsche to release stylised special-edition 911s like this, with past models such as the 997.2 Sport Classic and 991 50th Anniversary special edition both highly sought after and equally well finished. Like its forebears, this 911 Targa 4S Heritage Design edition looks to have just enough bespoke elements to carry the somewhat steep asking price.