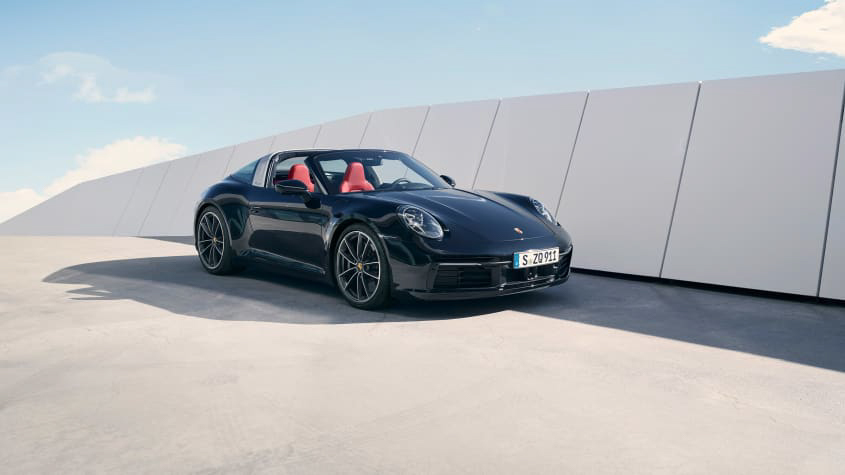 With 50 percent of all Porsche sports cars sales of the open top variety, it was only a matter of time before the 992 received the company’s iconic Targa roof. Carrying over the 991’s retro roll hoop design, the new 911 Targa will be available as either a Targa 4 Targa 4S as before, sharing all the core mechanical elements we know well from standard 911 Carrera models.

The mechanics of the Targa roof are familiar from the 991; the standard Carrera 4 and 4S bodyshell is borrowed from the Cabriolet, but instead of a folding soft-top arrangement, Porsche fit a glass tonneau which rises to store a folding fabric roof panel that connects the static roof hoop to the windscreen. The result is a glassy, open feeling to the cabin with a central roof section that’s still able to be removed entirely.

As with the 991, the new 992 Targa is only available with four-wheel drive in either standard 380bhp Targa 4, or 444bhp Targa 4S forms, both coming as standard with an eight-speed dual-clutch PDK transmission. Customers in this market are only interested in the highest specification possible according to Porsche, hence no rear-drive option. The Targa 4S is also available with a seven-speed manual gearbox, but as with the coupe, it is only available when combined with Porsche’s Sports Chrono pack.

Performance is identical to that of equivalent Cabriolet models, with 100kph (with Sport Chrono) reached in 4.2sec and 3.6sec in 4 and 4S respectively, while the manual Targa 4S takes slightly longer than both at 4.4sec. Despite the Targa’s glass tonneau, kerb weight is only 30kg up on that of the Cabriolet at 1665kg, which is 100kg more than an equivalent coupe.

Visually, the glass tonneau spreads further down the Targa’s silhouette than the Cabriolet’s fabric roof, reducing the heavyset look 992-generation Cabriolets can have with the roof stowed. The Targa’s styling otherwise suits the 992’s design language, with a myriad of Porsche Exclusive personalisation options also available that can either keep it sleek and under the radar, or more flamboyant, if that’s your kind of thing.

Previous ArticleAlfa Romeo 4C Spider review – better than the coupe, but Alfa’s sportster is still flawed
Next Article 60 years of Mazda coupes – from R360 to RX-7s to RFs