If you’re anything like us, one of your first port of calls at this year’s Dubai International Motor Show was the ‘Nostalgia’ hall, in which – after much traipsing – you’ll find around 80 classic cars and trucks that cover more than half a century of motoring. As you can imagine, the polishing has been endless.

Not for us to simply reel off the full list of classic models on display though. So instead, we’re going to outline some of our personal favourites, starting with five from our publishing editor.

While this may not be ‘the one’ (there are currently five vying for that position), the Countach nevertheless booked a permanent place in my fantasy garage when I was just eight years old. In an era when super and hypercars alike were designed to not only look the heavily buckled bees knee sockets but were just difficult enough to drive that the very act could put its driver in A&E – or a very large ditch – fair to say this particular Lamborghini fascinated many, quickly. Mind you a 5.2-litre V12 has a tendency to do that…

This particular model – a 295kph 25th anniversary model – rolled off the presses in 1989, was designed by one Horacio Pagani, and was one of only 657 produced (which rather puts that 25 only W Motors Fenyr into context, doesn’t it?). Not a bad send off for the breed, which just one year later in 1990 was replaced by the equally batshit Diablo. 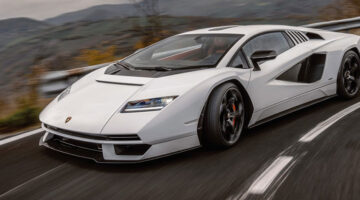