In 2015, the Degler Calendar rolls out a new theme…

Those of you with the 2014 Degler Calendar hanging with pride on your living room wall will already be familiar with the stellar works of Piotr Degler Jablonski. Consequently, you’ll no doubt be pleased to learn that – fresh from his ‘Concept Cars of Bertone’ project this year – the Spanish photographer will debut 12 brand new shots for his 2015 edition. So, what do you think Piotr has gone for this time…?

…actually no, you’re absolutely wrong. Following a one month trek that took in pretty much every inch of landscape between Viñales and Santiago de Cuba, the 2015 Degler Calendar will this year boast a ‘Carros de Cuba’ theme, a tribute to those automotive classics that have survived more than 50 years up against the hourglass. Among the most notable models being showcased are the Hispano Suiza, the BMW Isetta (the former star of THIS Petrolicious video) and the Mercedes-Benz 300 SL Gullwing, the three-pointed star’s iconic model whose lineage you’ll find in the brand new AMG GT.

Printed in Italy, each calendar measures 60x40cm, is bordered by an aluminium frame (with black anodized font) and retails for €165 ($215). Standard prints without the frame are also available for €65 ($85), but there’s also that all-important ‘Collector’s Edition’, which comes with a bespoke ‘rusted’ front surface and a numbered plaque for €300 ($390). With ‘no forced elements’ included in the imagery, what better way to show – in Piotr’s words – the respectfully show the reality’. 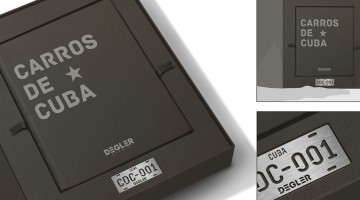