This year, the region’s 2014/2015 motorsport season welcomes a new addition. Alongside the already established Porsche GT3 Challenge Cup Middle East, Radical Middle East Cup and Formula Gulf 1000 race series, the TRD 86 Cup debuts in its native UAE as a support round of the Gulf 12 Hours endurance race in December.

Start-up motor racing series promising that time-honoured phrase ‘something fresh and exciting’ is no new concept, and motorsport’s illustrious history is littered with examples of those that didn’t quite make the grade (the short-lived Superleague Formula that tried to blur the lines between football and motor racing springs to mind). With the brand new TRD 86 Cup though, and considering the Middle East’s still fledgling grassroots racing scene, Head of Business Development at the Yas Marina Circuit Faisal Al Sahlawi believes the facility’s first ever single make championship is capable of springing a few surprises.

“With the TRD 86 Cup, we’re bringing a lot more racing licenses into the scene,” explains Faisal. “As you know, grid sizes have diminished considerably and it saddens us to see that. With the launch of the Yas Motor Racing Club, we didn’t want to just put a brand out there without something to back it up, and the 86 Cup is what we’re hoping will do that.”

Based around the TMG GT86 CS-VJ racecar, the new TRD 86 Cup is scheduled to host a six-round series (incorporating at least 12 races) between December and April using different layouts of the Yas Marina Circuit. Already the series has attracted a ten-car grid for the first race, with more expected to join as the debut season progresses. There’s even talk of a class system being put in place to offer racing opportunities for both professional Masters and budding Rookies. Rather than joining an established regional motor racing series, building from the ground-up seemed the most logical step.

“This makes it so much easier to police and ensure all cars are equal, and that the cost compares favourably to anything in the Middle East,” Faisal explains. “Other championships…they have faster cars, I agree, but the cost is nothing compared with this. We were trying to find the right formula in terms of driver enjoyment and affordability, and we were doing that for more than a year and a half. Motorsport as you know is very expensive, and having an unreliable car just adds to the expense, so having the 86 was a good platform to start with. It’s one of the few rear-wheel drive cars that is affordable and still fun.” 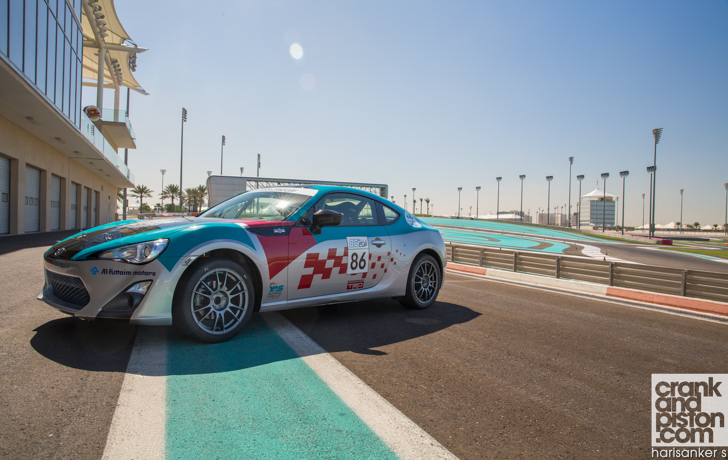 Hard as it may be to believe, the ‘affordable and still fun’ TRD 86 Cup cars that join the grid feature very few differences to their road-going counterparts despite being meticulously prepared by Toyota Racing Developments. Stripped for added weight reduction and properly fitted with FIA mandated safety equipment – particularly the roll cage – the 86 Cup features slick race tyres, race-spec suspension and a revised exhaust system, but that’s about it. Power from the 86’s 2.0-litre flat-four boxer engine has not been changed from its 200hp level, and competitors use the same six-speed manual gearbox. Even the electric windows have survived.

And it is this rugged simplicity that quite literally proves the car’s selling point. Rather than renting a race seat, for their 150,000AED – approx. $40,000 – entry fee, drivers buy a racecar in its entirety. This means they and they alone are responsible for the maintenance, setup and livery of their TRD 86 Cup car (though there are no race fees for a driver’s first season, this being included in the package).

“Racing is not just driving. It’s about learning the car setup, which is one of the major elements that make a driver successful. So owning a car and working on it teaches a driver more about the act of racing: instead of just arriving, driving and going home, it creates a relationship with the championship and the car. So a lot of our drivers will work on the car themselves or work with an existing UAE race team that offers a package. But either way, it keeps them involved.” 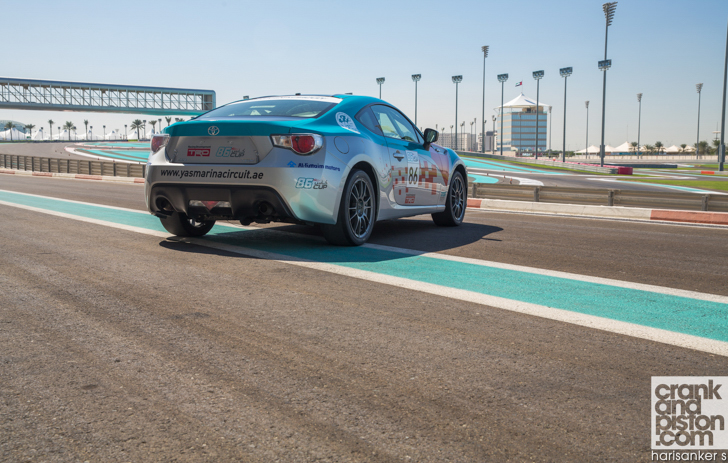 The big problem though – alongside grid numbers – is the diminishing number of race fans: very rarely would families sit and watch five-to-six hours of motorsport if the interest isn’t there. Faisal hopes to change this during the TRD 86 Cup’s first season by launching a series of initiatives for race fans in the paddock and hospitality areas, though he remains tight-lipped on that for now. There’s also the potential for financial gains for the season’s victors, with a trophy allocated to the season’s top driver and – potentially from next year onwards – prizes as supported by the Abu Dhabi Sports Council. Demand for race seats is there, and with a little luck in the right areas, Faisal Al Sahlawi is confident the new TRD 86 Cup can trigger not only interest in grassroots motorsport but the support of rival manufacturers as well.

“The demand is definitely there, James. Funding of course is very hard to find, but we were very lucky as Al Futtaim Motors and Toyota Racing Developments have been extremely supportive of us. Motorsport is all about fans, sponsors and drivers, and if you don’t have those, you don’t have racing, no matter what car you build. The manufacturer has always been the missing piece of that puzzle, so I hope other brands see the benefit of what we’re doing here and tag along.”