Clemens Schmid gets his Porsche GT3 Challenge Cup Middle East title defence off to a good start with victory over Kuwaiti’s Zaid Ashkanani at the opening round in Bahrain.

Rewind 12 months and you’ll find a similar situation to this weekend’s Porsche GT3 Challenge Cup Middle East season opener: a dominant performance from Clemens Schmid for Al Nabooda Racing and a similarly impressive outing for Zaid Ashkanani. But while he took an impressive fifth at last year’s season opener at the Bahrain International Circuit, the Kuwaiti started the 2013/2014 season started with an outright second place, his best result yet in the Porsche GT3 Challenge Cup Middle East.

A superb start for the Team BuzaidGT runner left him snapping at the heels of poleman Schmid into turn one, though from there the race settled down into the Austrian whitewash fans grew accustomed to during the previous season (due in no small part to the reigning champion’s Mobil1 Supercup duties this year). A one-second lead after one lap, a five-second lead by mid-distance, and a near-ten second advantage by the chequered flag. Goodnight Vienna.

Behind the runaway leader however, it was clear the off-season had done nothing to dent the field’s competitive spirit, an ambitious/damaging attempted pass by Bronze runner Ziad Ghandour aside early on. A superb start from the second rowman Karim Al-Azhari – coupled with an unfortunate getaway from The Saudi Falcons’ Abdulaziz Al Faisal – saw the Al Nabooda cars sandwich Ashkanani early doors, followed closely by Hasher Al Maktoum’s Dubai Falcon Racing Team GT3 and Herbert Haupt after a sensational start from the M Event Project runner from ninth on the grid.

Eager to start his climb early, Abdulaziz/ATF was on a charge, quickly tracking down and passing Haupt and setting off at pace after Al Maktoum. A temperamental transponder led to confusion on pitroad, with the Emirati dropping from fourth to last every lap as the second timing sector on-track at failed to pick up the #1 car’s signal. Fortunately mechanical woes were kept to a minimum, Al Maktoum managing to hold off two-time series champion ATF for fourth at the chequered flag. A heated scrap for sixth that several times saw Team Bahrain’s Mohamed Mattar and Saeed El Mehairi go line-astern and side-by-side (and even sometimes making contact) down the main straight and rear configuration eventually saw Mattar lead El Mehairi over the stripe for the final time by barely half a second.

A frustrated Faisal Binladen was left with plenty of work to do after a collision in the opening stages dropped the reigning Silver Trophy winner from ninth to the back of the field. Having battled his way past a resurgent Bronze Trophy midfield, Faisal came close to leapfrogging Hannes Waimer for ninth at the flag after a superb charge through the field. Antonia Giancarlo proved #13 can sometimes prove lucky by rounding out the top ten in the MACOM entry.

Rather less chuffed with the afternoon was Nielsen Racing’s Christina Nielsen, the series’ only female competitor losing time on pitroad before the warm up when her GT3’s 3.8-litre flat-six wouldn’t fire. A collision with Faisal in the early stages earnt the Dane a drive through penalty, which became a black flag when miscommunication led Nielsen to overshoot the window. The #91 entry pulled onto pitroad for good from eighth on lap nine.

Previous ArticleThe best of SEMA 2013. Something for everyone
Next Article WEC 6 Hours of Bahrain. On the ground with crankandpiston 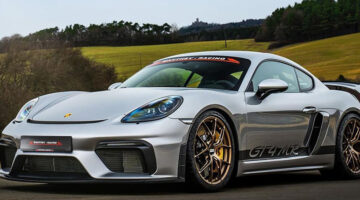