Audi maintains its lead at the 24 Hours of Le Mans as Toyota starts to close the gap. Further down pitlane, other teams have a fight of their own on their hands. 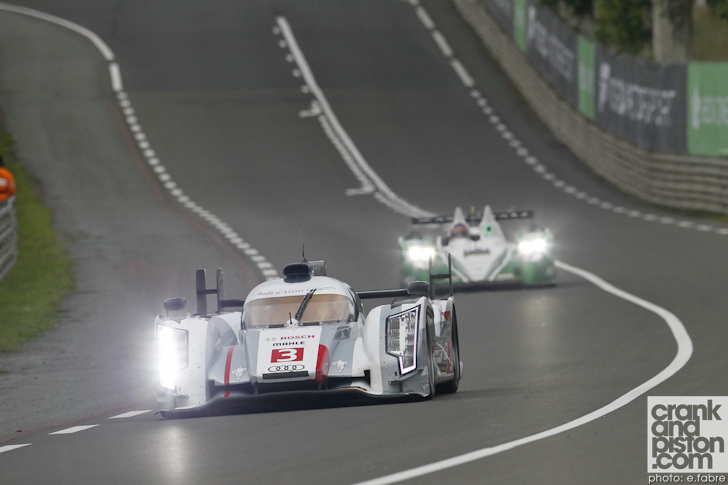 The sight of the #1 Audi being rolled into the garage stunned everybody, yet proved only one chink in an hitherto unblemished armour. Electrical issues had already seen the R18 e-tron head for pitroad for two unscheduled pit stops, the early leaders – having got the jump on the polesitting #2 entry – having amassed a massive 40-second lead over its sister cars by the time the sixth hour ticked by. By the seventh, the #1 car had lost the lead, had dropped to seventh, and mounting speculation suggested we had seen the last of its bid for the Le Mans hattrick.

The #3 e-tron was fairing little better, despite a feisty battle for a podium spot with the #2 car in the early going. A vibration and a puncture dropped Lucas di Grassi, Marc Gene and Oliver Jarvis two laps behind new leaders Loic Duval, Tom Kristensen and Allan McNish, but still kept them in the hunt in fourth. Toyota meanwhile were relishing this unexpected opportunity, snatching second (Anthony Davidson, Sebastien Buemi and Stephane Sarrazin in the #8 TS030) and third (Alexander Wurz, Nicolas Lapierre and Kazuki Nakajima in the #7) respectively. Sprightly laps from Lapierre had kept the lead Audi on its toes in the early stages.

But that was just one side of the story. The weather and the event’s inevitably high attrition rate saw many of the 56 teams encounter problems: 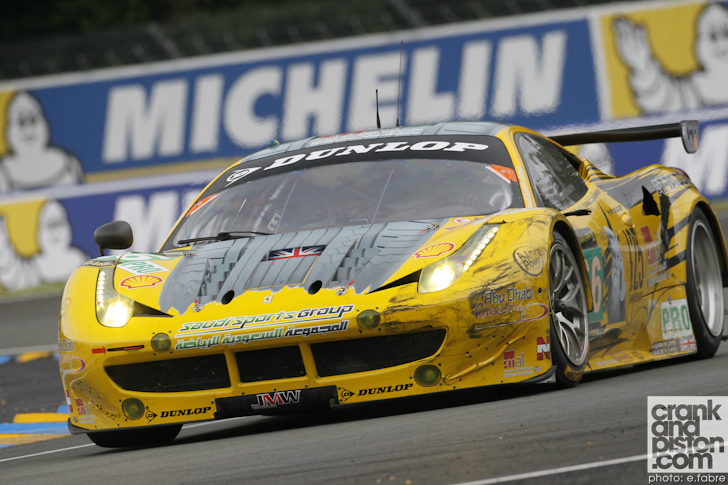 “It’s an honour just to be able to take part in the race, and a privilege to be the first Emirati to participate at Le Mans. There was a lot to sink in during testing, but this week we didn’t have the best conditions to get used to the track. It was raining on test day, in practice and then we had a moment during practice on Wednesday and that took us out of most of the session. So warm-up was the running I had in the dry, and I only had one lap. I mean the rain was good practice, because we might have an advantage with our tyres in the wet. But I just wanted to get used to the track.

“The whole race for me is going to be a learning curve, preparing for next year hopefully. I want to get as much track time as possible. The track is high speed, narrow, and you’ve got the prototypes coming all the time. Then there are the braking points coming into Indianapolis, the Porsche Curves: this is where the prototypes catch up with you really quickly.

“I’m not as nervous as I was earlier because I got that lap in, and I knew that the pace is there. I’m still really excited to be here.” 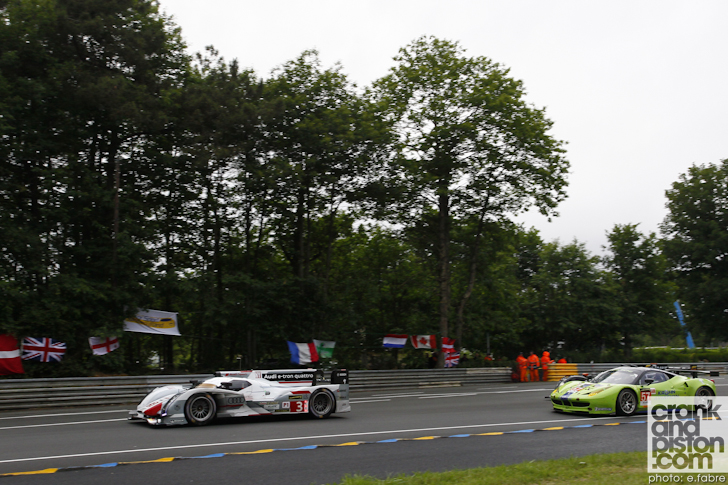 “Yeah I had an incident at Dunlop. There were two GTs and an LMP. I cut back and stayed to the left, and the LMP just drove in the side of me. I think it was one of the Lotus cars, but I’m not a hundred per cent sure. He drove into the side of me, hit the rear right and gave me a puncture.

“We’ve had a tough time so far. We had a huge vibration on one set of tyres and now we’ve had a puncture. I really thought we had a chance of winning this race, but it just seems to have got away from us. But as we can see with the #1 car, there’s a long way to go and other cars can have issues. So we’ve got to keep pushing and let’s just say we’ll never give up. But we’re two laps down and it’s going to be tough.” 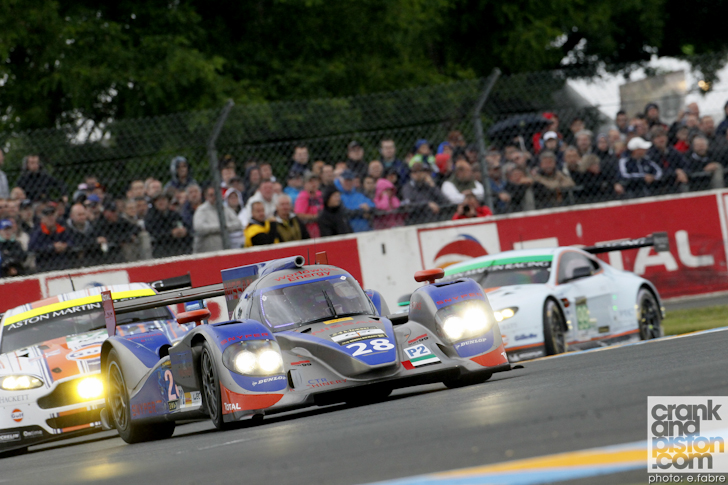 Fabien was unavailable for comment when the Lola encountered a vibration, linked possibly to suspension issues. That didn’t stop the team boss feeling confident about the race earlier in the day.

“The car is okay. During the test day things were a little more complicated, and the weather was really difficult. There were also many crashes on the track. But we’ve prepared a lot for this race, so it’s looking good for us. When we tested in Dubai we had a crash that disturbed the preparation of the season, but now everything is okay and we will try to do the best we can for this long distance race.

“We also have a good, experienced team. Philippe [Haezebrouck] has a lot of experience, and Keiko [Ihara] was driving with us last year at Le Mans. She’s progressed a lot. So I think we can expect a good performance from the drivers.

“We’ve also made a new deal with a new sponsor, and that’s for three years, and now we are really positive for the future. So that means we can prepare the season nicely.” 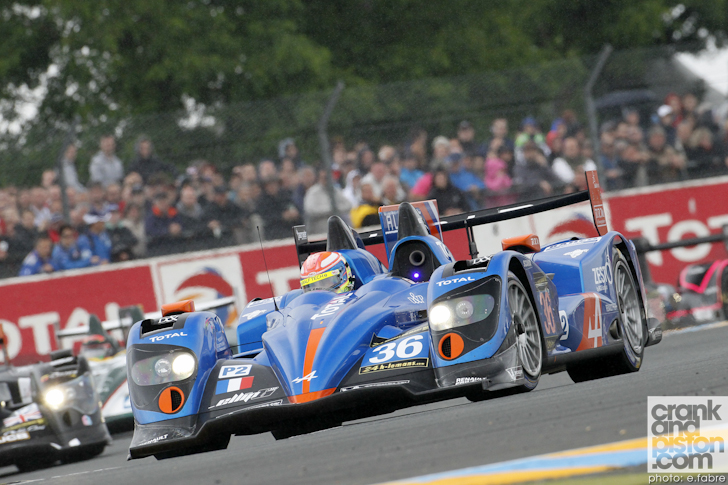 “It’s really something special. We’ve felt that for many weeks now, and every day during Le Mans we can feel the enthusiasm of the people and everybody around us. It’s important to show that Alpine can do a good job so that we can stay here for many years. I think for me, Le Mans is the most important and beautiful race in the world. It’s always something new, a big adventure. I think for all the drivers, it’s something special in our careers.

“Officially we have to stay on the track first of all, and we have to see the chequered flag. We will push, but we will have to take care of the car, and we will see Sunday night how well that strategy has worked. Of course we would like a good surprise, and if we could be on the podium that would be perfect.

“But we’ve had problems. I had just come out of Tertre Rouge, about 100 metres out. The steering wheel was straight, and suddenly I lost the car. The team said the rear left tyre exploded, and I did a 360 [degree spin] on the straight, and touched the wall. So now we have to repair the rear, but it’s nothing huge. Of course, we will be back out.” 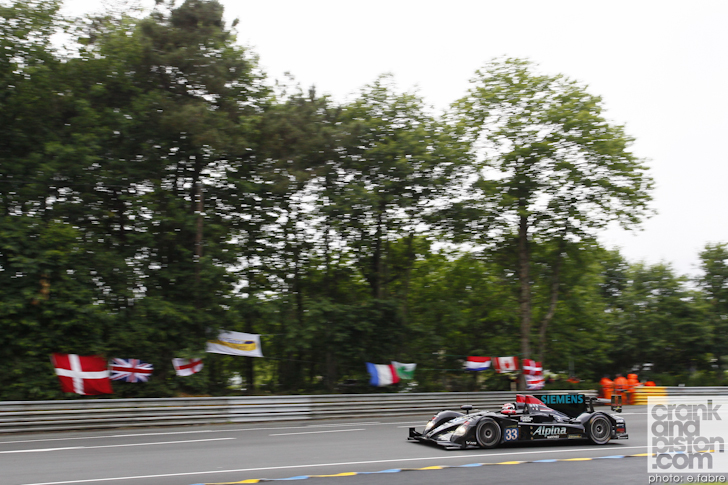 “So far things are going quite well. We had a puncture, which we spotted at the Dunlop Chicane, so I took my time on the way back. I saw a Ferrari coming back just now with a puncture who went too fast, and he’s destroyed the entire left rear of the car. We got back with no damage at all. Yeah, you lose a bit more time but it’s better than having to bring it into the garage.

“We’re just trying to be sensible and react to the conditions as we face them. I think we did a fantastic job early in the race. I mean we didn’t change tyres for the first three or four hours of the race, and that was great driving on Ryan [Briscoe]’s part and great confidence from the team in their decisions. That work really well for us, moves us right up. So we’re going to need some more of that to get back in the game after the puncture, but it’s far from over. We’ll keep pushing. We’re definitely in the fight [for class victory].

“Balance of the car is pretty good. The guys have been working really hard, and we’re definitely in the fight, which is fantastic. It’s a shame to lose all that time to a puncture, but to be honest…[pause] I was just reading about Allan [Simonsen] when I got out the car. The moment I saw that, I thought ‘it’s just a race’. Y’know, I’ve been thinking about him and his entire family and friends. We worked together when we were young, and…[pause]…I was just talking to him yesterday. It’s just absolutely heart-braking.” 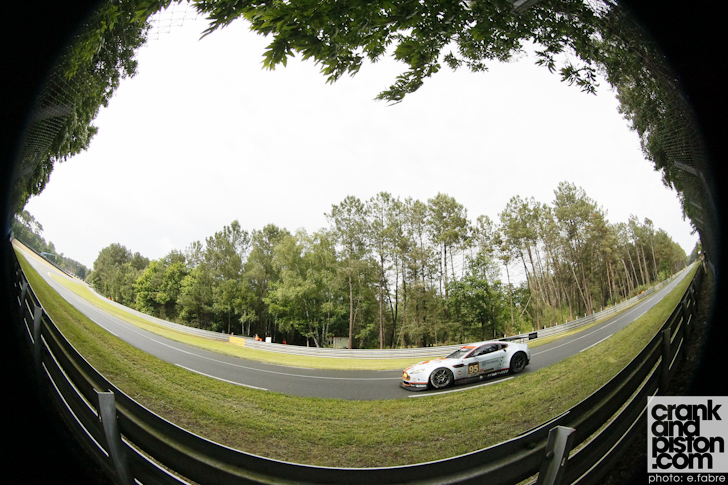 At this point the interview ends. A clearly deeply affected Marino has just dipped his head, and there’s an audible lump in his throat as he finishes the last sentence. The tragic start to the race has clearly had an effect on everyone, not least Aston Martin Racing for whom Allan Simonsen was driving. The Dane’s family though have insisted that the team continue to race, in honour of Allan. Never will class victory at Le Mans have meant so much.