Updated for 2015, the Volkswagen Golf’s sister model is back. But is the magic still there? crankandpiston.com goes for a spin to find out. 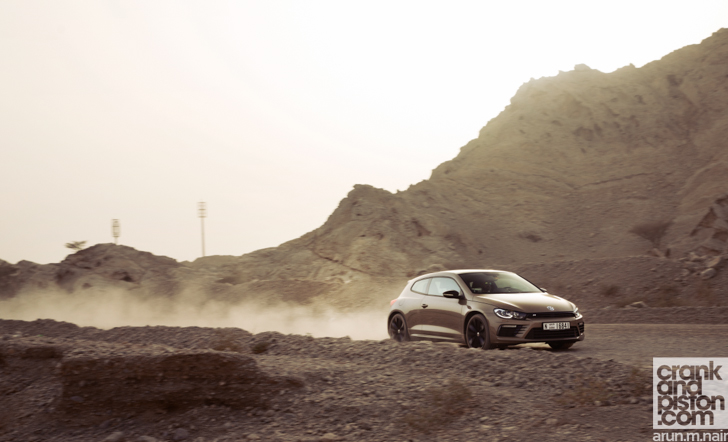 If I imagine that have never driven a MK 7 generation Golf GTI, I would find this Scirocco R nothing short of spectacular. It has, after all, everything you would want from a chuckable hoon machine.

Take the engine for instance, a 255bhp 2-litre turbocharged four-cylinder that is easily the highlight of the ’new’ (slash facelifted) Scirocco R. Despite being slightly detuned in the region for cooling purposes, it still has some serious grunt: packing around 140bhp per litre, this engineering marvel pulls well from 3000rpm before giving its best on the run to 6500rpm. Indeed, the enormous 19in wheels at the front can barely cope with the abundant torque and power in the lower gears.

Then there’s Volkswagen’s excellent six-speed DSG gearbox, mated not only to the R’s turbo four-cylinder but also used in abundance across VW’s range. And with good reason, fast and precise blips from the DSG proving ideal for effortless bursts of speed. 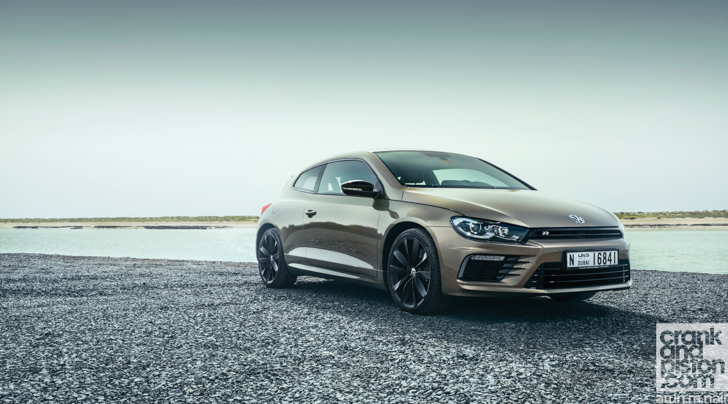 If cosmetic changes are minimal, what is it like to drive?

Communication between the front and the back axle is similarly well balanced. Normally I prefer a more lively back-end (such as you’ll find in the Renault Clio R27 and the Ford Focus ST), but in the Scirocco R, grip is such that the rear wheels follow the front religiously. Limits are very high, to the extent that it’s almost impossible to rattle the composure of the rear wheels. I’d perhaps choose 18s over the 19s on our test model for a dash more comfort and a little more ‘play’, but each to their own.

The brakes meanwhile are very strong, feedback through the pedal equally as good: one does wonder how they would fair on-track. Coupled with this is the stiff – actually make that VERY stiff – suspension that provides a flat ride through the corners, excellent balance under braking and sharp mid-corner response. In lesser models, such a stiff ride would be jarring, though fortunately Volkswagen’s comfortable sport seats counter this.

Oh, and did I mention that the interior is also superb? Quality of materials is arguably the best you can buy in this class, the layout of the dashboard similarly impressive and uncluttered, the turbo pressure and oil temperature gauges (plus stopwatch) adding a little extra drama to the experience. 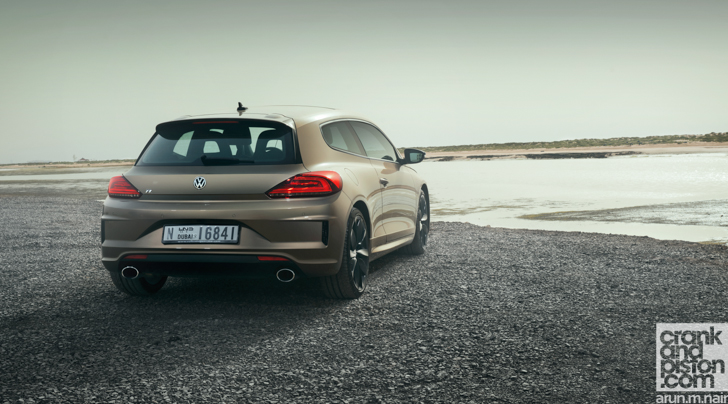 So just how good is the ‘new’ Scirocco R?

No other way to put it, the ‘new’ Scirocco R is a seriously impressive piece of kit. And if there is one problem – and I can only think of one – it’s the VW Golf GTI.

With its revised looks (tweaked headlights are about it) and updated tech, the Scirocco R is mighty, but like its predecessors, it’s greatest rival is the enemy within. Like its sister model, the Mk 7 Golf GTI is direct, well-balanced and superbly responsive through the turns. But unlike the GTI, there’s still a little excitement missing from the R.

What makes the seventh gen Golf one of a kind is its steering, which is incredibly direct: the GTI truly can turn into corners at speeds with which only your imagination will keep up, refusing categorically to understeer. The Scirocco meanwhile – though still excellent – by comparison just feels a touch lazier, a little less alive, and a little (just a little, mind) more prone to understeer on turn-in. It remains a perfectly balanced car. I just wish it had that extra turn-in speed, and that extra dash of excitement, of its big brother.