Smaller, meaner-looking and more powerful. The sixth-generation Camaro is revealed.

Chevrolet has whipped the covers away from the new sixth-generation 2016 Camaro, which promises to give Ford’s latest Mustang a run for its money.

The all-new car is smaller and lighter, with kerb weight reduced by up to 90kg, thanks to an aluminium instrument panel frame instead of steel and lighter suspension components. It has a wider range of available engines, from a 2-litre turbo through a 3.6-litre V6 and the obligatory big V8. The range-topping Camaro SS boasts 455bhp, making it the most powerful SS yet. Expect more snarling, sportier versions to be announced in the future though.

Chevrolet says the new Camaro’s dramatic, sculpted look has been determined by aerodynamics, with plenty of wind tunnel time to reduce lift and improve effieicncy. Inside, there’s a new Driver Mode Selector that sets up the car in four different modes from snow and ice to track, and a configurable instrument cluster, which on some models includes two eight-inch screens. 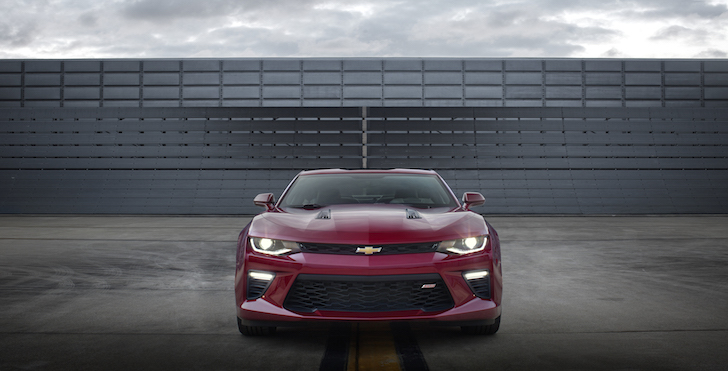 The 2-litre turbocharged option makes 275bhp and 295lb ft, with a 0-100kph time of “well under six seconds”, while the new 3.6-litre V6 has 335bhp and 284lb ft, which Chevrolet says is the highest output of any naturally aspirated V6 in the segment.

The Camaro SS boasts the same 6.2-litre LT1 small-black V8 found in the Corvette Stingray, with 455bhp and 455lb ft. For the first time, the SS also gets Magnetic Ride Control active suspension, with a multi-link MacPherson strut set up at the front and a new five-link independent system at the rear.

All models are available with either a six-speed manual transmission or an eight-speed auto. In addition, all models have the option of Brembo brakes, which are standard on the SS. Goodyear tyres are standard across the range.

Options? They’ll depend on the market, but in the US at launch there will be 10 exterior colours availble, five interior combinations and a plethora of wheels, stripes and other accessories.

The new sixth-generation Camaro goes on sale in the US later this year, with international sales following.

1000bhp The Exorcist. Hennessey’s answer to The Demon