The Dubai 24 Hours returned for its ninth outing at the Dubai Autodrome this weekend, so let’s get the basics out of the way first.

Though this rather monotonous intro doesn’t convey it, one could argue that the 2014 Dubai 24 Hours was one of the best races since the event’s inception. And this despite grandstands being far from full from start-finish. Allow me to explain… 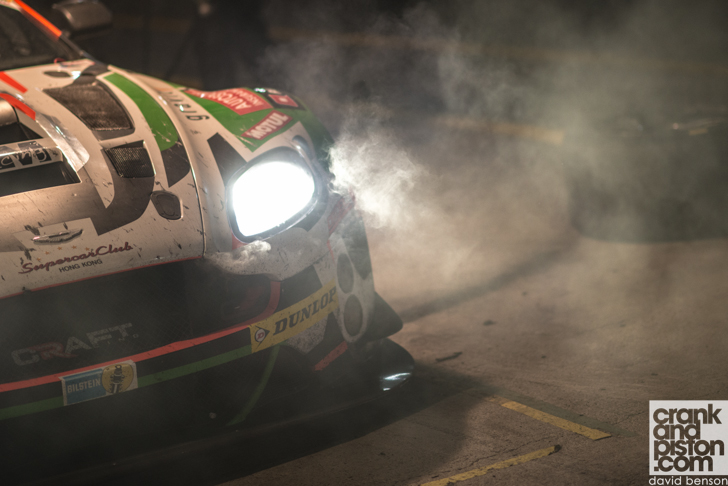 An unspoken rule was muttered in hushed tones as the race progressed: don’t hit the front. If you do, expect time lost on pitroad (at best) or a monumental rebuild. Too many frontrunners were lost in the early going to simply pass off their various escapades as coincidence. By the 3rd hour for instance, the #76 BMW Z4 GT3 topped the timesheets after a solid opening stint. A puncture though would stunt progress, and a collision shortly afterwards would drop the Team Schubert entry out of the top ten altogether. The #21 V8 Racing Corvette C6-R, despite a good scuffle during the opening laps, would fall to ninth before the end of the second hour thanks to poor luck on pitroad. Indeed, given many graceful pirouettes during the 24-hour period, fifth almost came as a relief.

The key it seemed? Let someone else lead, and eventual 16th-placed Fach Auto Tech’s #4 found this out the hard way when its Porsche 997 GT3 R – a three-lap lead in its pocket – was trucked back to pitroad shortly after dawn. 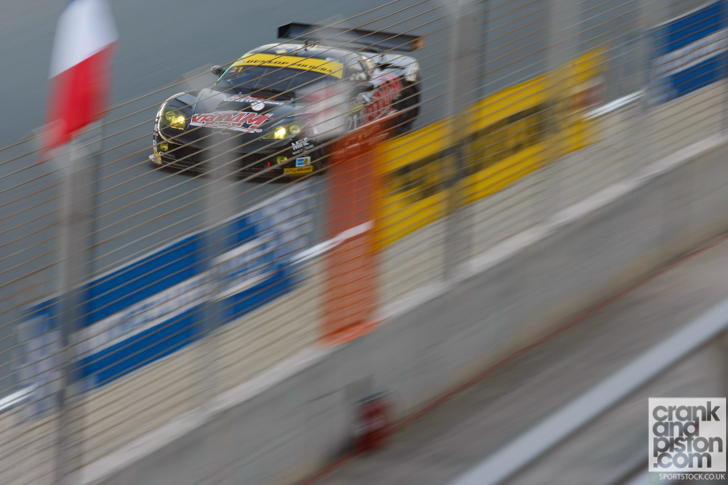 Incredibly, none of last year’s Dubai 24 Hour podium finishers repeated their achievements in 2014. Craft Racing was one of the first to fall, the #7 Aston Martin Vantage GT3 of Stefan Mücke (GER), Darren Turner (UK), Tomonobu Fujii (JPN) and Darryl O’Young (HKG) losing a fight with the barriers on lap 62. Notable by their absence – though still influential in the quirkily titled ‘Spirit of Race’ Ferrari 458 Italia GT3s – AF Corse was unable to top its runner-up spot from 2013. The spirit of the race meanwhile hit both #5 and #14 machines with a healthy dose of irony, a DNF and ninth respectively not going down too well when the latter had looked good for fourth overall (until being blackflagged for dangerous driving on-track).

Even last year’s winning Mercedes – the #1 Team Abu Dhabi by Black Falcon – couldn’t escape. Having looked set to romp comfortably to victory as the race hit mid-point, electrical problems landed the #1 in the Black Falcon pitbox for lengthy repairs, and eventual retirement.

Step forward the newboys to fill the void, not least of which was the #21 Corvette of Dutch teammates Wolf Nathan, Danny Werkman, Rick Abresh, Alex van’t Hoff and Nicky Pastorelli that took a shock pole position. The #458 GT Course Ferrari similarly punched above its weight by securing fourth overall after an impressive run beneath the radar. 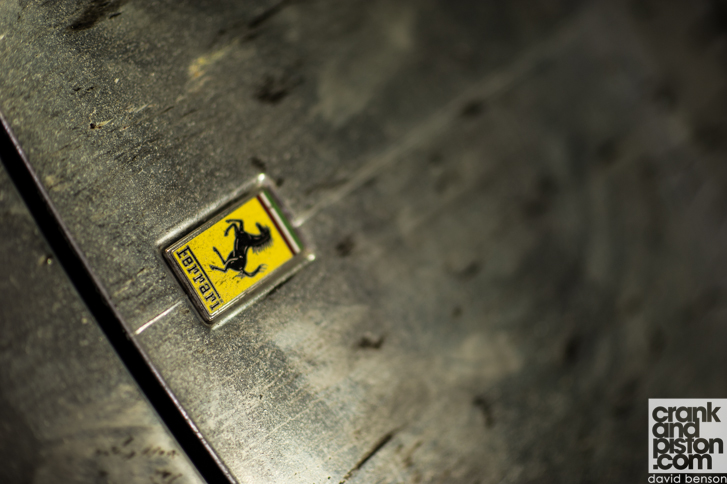 No Dubai 24 Hours is complete without some slightly knackered bodywork: put 80-plus cars of wildly varying speeds on a 5.4km circuit and a collision is inevitable. Déjà vu hit the #30 Ram Racing like a freaking anvil, the lead Ferrari 458 Italia (there’s that jinx again) being wiped out of contention by a collision with backmarkers during the night, in much the same way the team’s debut race fell apart last year. A sizeable collision between the #95 Pfister Racing GmbH SEAT Leon Superfcopa and #78 Hofor-Kuepperracing BMW E46 Coupe as the race reached two-thirds distance left the circuit dangerously close to impassable, and the risk of punctures soaring.

Close quarter racing proved less fraught though no less white knuckling in the opening stages, with the midfield – all 30/40 cars worth – duking it out in very close quarters. Raised eyebrows as drivers pulled off their helmets demonstrated just how close the racing was, and indeed would be. The A6-Am winning #888 Dragon Racing Ferrari 458 Italia for instance would incredibly finish on the same lap as nearest rival, the #10 rhino’s Leipert Motorsport Lamborghini Gallardo. After 24 hours of racing. It’s difficult to be closer than that. 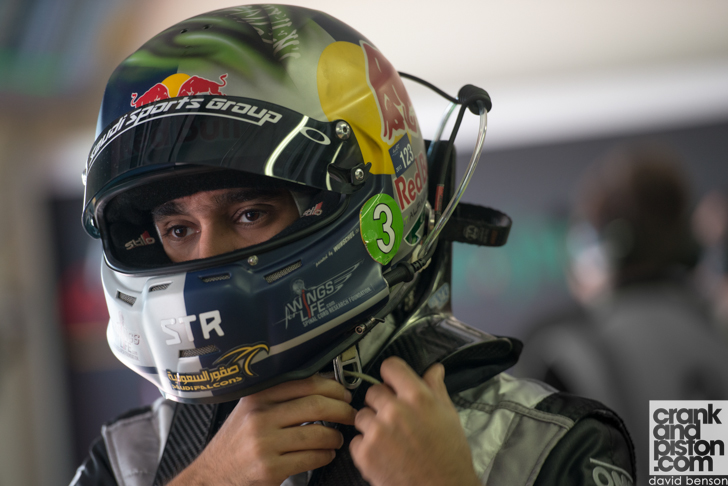 4. Hardluck heroes finally given a break

A podium finish for Abdulaziz Turki Al Faisal at the Dubai 24 Hours was a long time coming, third overall with Team Black Falcon putting to bed tales of woe from days gone past when victory was on the cards. That fan favourites Racing Divas managed to come back from near oblivion after a sizeable shunt barely two hours into the race to win the A3T category was also well received, in no small part to the team’s charitable foundations.

All eyes though was on the winning Porsche 997 GT3 R, which not only took Switzerland’s first ever Dubai 24 Hours win but also took Porsche’s first on the event since 2010 and its first overall. With four outright wins from nine outings, the German marque rules the Dubai 24 Hours waters unopposed. 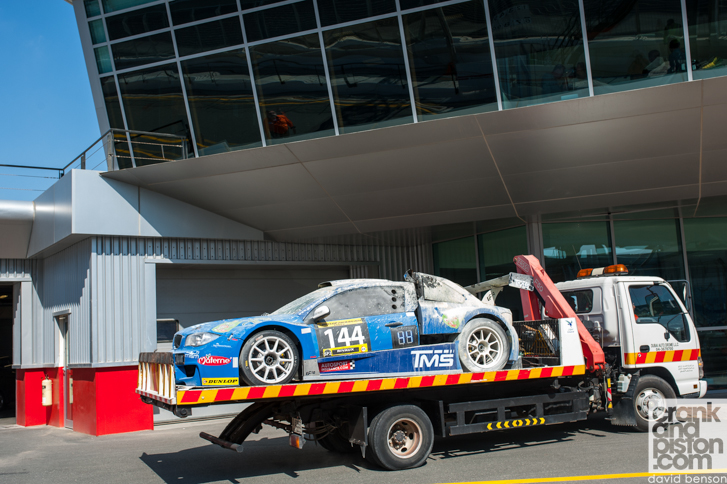 Billed as the 24-hour endurance race with the longest night stint in the world (13 hours, by the by) and notwithstanding the prospect of a German manufacturer NOT winning the event for the first time ever, yet more action on-track kept heart rates soaring. The word ‘Ginetta’ for instance became a by-word for ‘there’s a car off in the barriers’. Further up the field, giving the sleep-deprived members of the Team Black Falcon team a not-greatly-appreciated shock to the system with a tyre blow out had not been Al Faisal’s goal during his final stint. Fellow Mercedes-Benz runner Marc Basseng in the #38 Merc was grateful he’d breathed in, both cars missing each other by inches. For sheer ‘out of the seat’ excitement though, Al Qubaisi’s very late race spin out of turn 16 – so, SO close to the pitwall – had crankandpiston out of its chair.

Pre-event shunts left some entrants on the bench before they’d even started. While last year’s eventual winners Team Abu Dhabi by Black Falcon simply bought a new Mercedes SLS after its race car ended up in the turn five barrier, AF Racing International had no such luck, the #15 Lamborghini Gallardo out before the green flag even dropped. The #144 GC Automobile Factory crew GC 10 V8 ignited on-track during practice, its smouldering engine cover and wiring taking hours to repair ahead of go time.

Then there was the Code 60s. Ten of them, in fact. More than three hours of downtime hardly sounds electrifying, but the prospect that anything could – and usually did – happen on-track was enough to keep the already fatigued leaders on their toes. 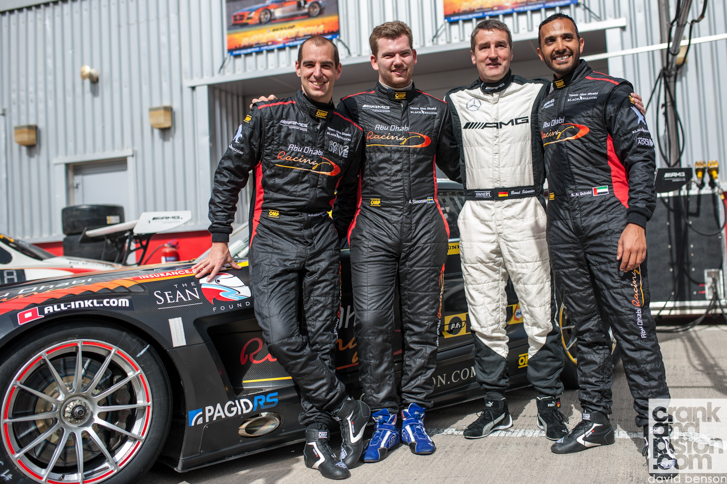 6. Talent by the pail

You get the idea… 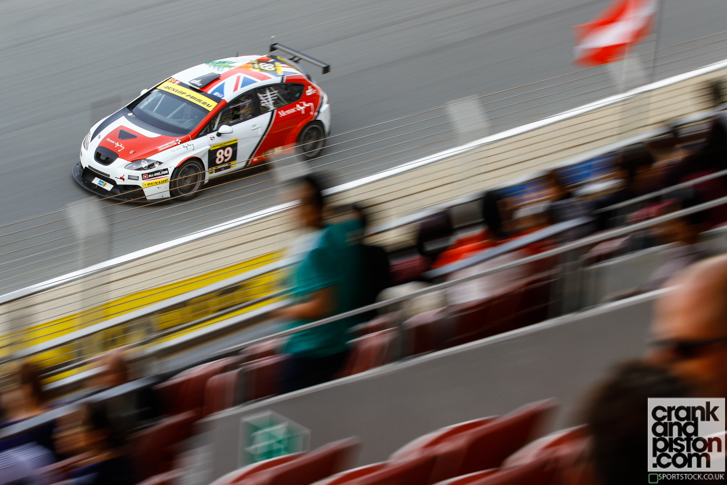 ‘The jinx’ it seems wasn’t exclusive to the lead A6-Pro runners. Indeed, the UAE in particular was dealt a stinging hand in 2014. Last year’s D1 category winner – and early leaders – SDVP Racing lost two hours changing an engine block while fellow UAE-ites (and last year’s class winner) Lap 57 Racing lost its A2 strangehold to broken rear suspension during the night. The A6-Am Dragon Racing #88 Ferrari 458 – running an impressive fourth overall – lost its laurels big time when Dan Norris-Jones lost control almost straight out of the pits, while a stunning opening gambit from the #89 Memac Ogilvy Duel Racing entry came to naught when the SEAT Leon’s now-traditional gearbox issues crept in.

A frustrating race for Emirati supporters, yet a bizarrely intense spectacle to back. Very seldom has 31st position – the A3T winner’s overall finishing slot – meant so much to this particular writer. 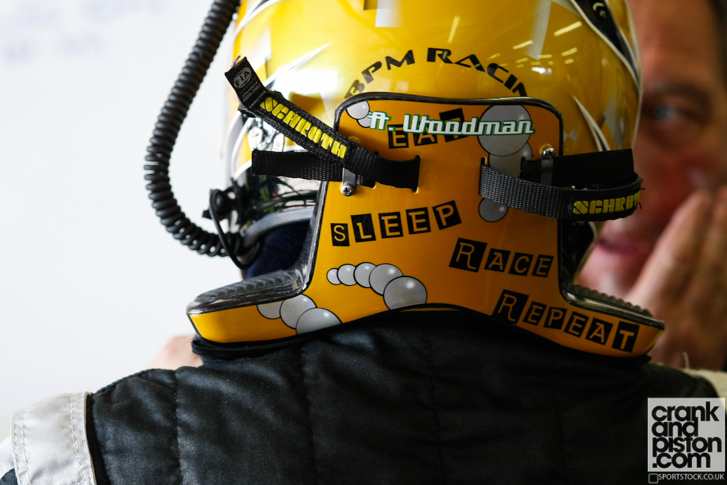 There’s no doubt that the racing, the drama, and the hammer blow of Sod’s Law made for one of the strangest, most entertaining 24-hour events the Dubai Autodrome has seen yet.