We build our own Bentley*

*No, not really. Can you imagine? It’d be terrible. However, we did head to the UK, to Bentley’s headquarters in Crewe, to have a hands-on craftsmanship tutorial using some fine quality leather. Mmmm. 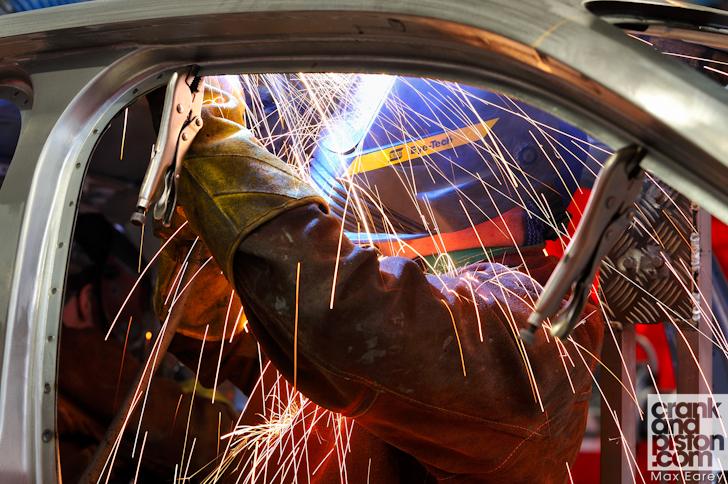 Last year, Bentley brought the EXP 9F concept car to Abu Dhabi. While it was interesting to see what Bentley’s future would look like (although word has it that the production car will look rather different), my attention was taken by activities happening in the corner, away from the spotlight. Bentley had brought over two of its craftsmen to demonstrate how the various luxury elements of the range were quite literally carved, sanded, inlayed, stitched and assembled by hand.

After years of watching cars being put together in vast industrial warehouses by yellow robots, this was a breath of fresh air. I liked it. I told the guys demonstrating that I liked it. I wanted to try it. And then I forgot about it.

But months later, Bentley called me up. “Do you want to come to the factory in the UK?” they asked, “we’ll show you around.”

“I want to do more than that,” I replied. “I want to build a car myself and drive it back to the UAE”. They laughed at me for a full three minutes, and hung up. But then they called back with a compromise. Would I like to have a go at some of the craftsmanship activities I’d witnessed, see the full-scale operations of what goes into making a modern Bentley, and then wang a Mulsanne around a race track? Reluctantly, still hung-up on dreams of my own home-made car, I agreed. 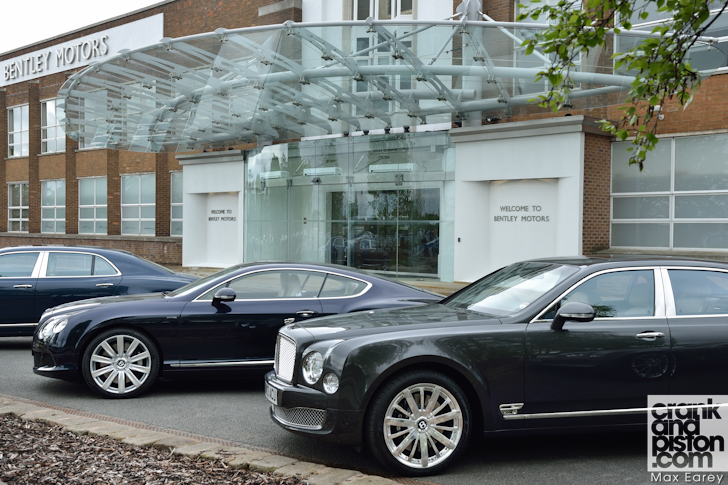 And so, on a cold but surprisingly sunny day, I arrived in Crewe, at the factory where Bentley has been based since 1946. All of the company’s cars are made here, in a vast collection of red-brick buildings amid streams of people shuttling between them. Other journalists are here too, but they’re just getting a look around. I’m getting a full hands-on experience, and I’m led away from the others.

There’s no messing about. I’m straight into the Seats building, a large bustling factory floor, with dozens, perhaps hundreds of people working away. There are a lot of large machines in the centre of the building, but next to them a group of men are scrawling in multicoloured chalk over complete leather hides in a variety of colours. I’m introduced to Dave, who tells me what I’m doing. 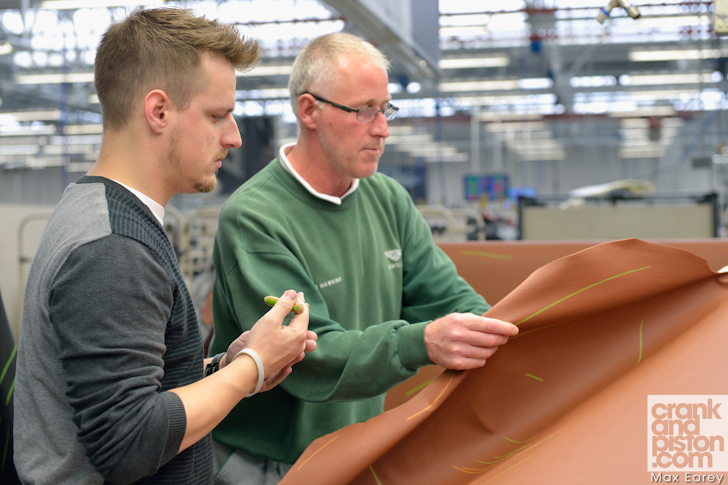 The hides – 14 of them in each Mulsanne – arrive pre-dyed from a supplier and will form the car’s upholstery, but they need to be checked before they can be cut to size. Cows, being animals living outside, are prone to scars and stretch marks, and these shouldn’t end up on the finished car. So a team carefully checks each one by hand and use either orange or green crayons to identify unwanted areas. For the next five minutes, this will be my job.

There is a lot of leather. Cows are large animals, and have a lot of skin. About five cubic metres, to be precise. And I have to manhandle it onto the inspection bench, which to onlookers must look rather like a toddler trying to change a duvet cover. Dave explains the legend of the crayons. “When we mark the hide up, we’re looking for something that we’d never, ever use. It could have a brand, or a hole. We’ll mark that up with orange. When we use the green pen, it means we can use it, because it doesn’t have a massive defect, but it should go in an area where the customer won’t see. It’s to make sure we’re not wasting in anything, but it won’t be on display.” 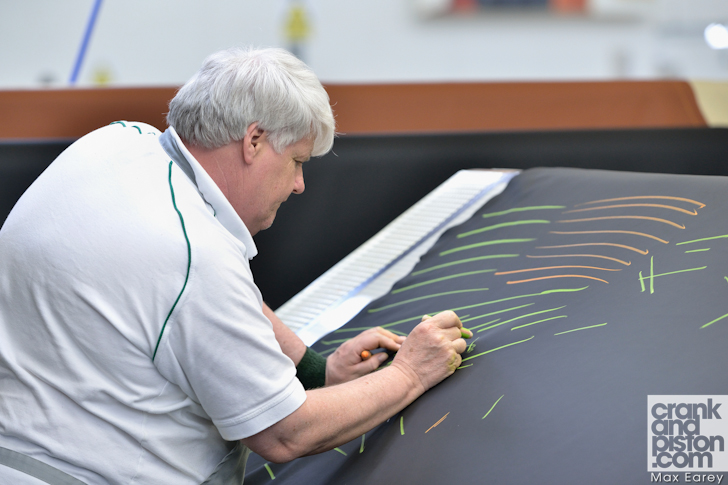 It’s a job that requires sharp eyes. I’m handed over to full time hide-scanner Roger, who starts confidently scrawling on the hide to show me which bits not to use. It all looks perfectly good to me. “You see how it’s a bit wrinkly?” he says, pointing to a virtually invisible set of marks. “It’s not quite as a smooth as elsewhere, and you tend to get that on the belly hide where it goes stretchy. You wouldn’t want that on your seat in the car. We’ll mark that up, but it could go out of sight.” I sweep a few marks of green crayon over the wrinkles and continue scanning, picking out flaws and scribbling on them. It takes me about three times as long as the pros, which I don’t think is bad for a first go.

Once the marking up is done, the hides are laid flat on a series of large machines known as Gerbers (after the manufacturer). These machines have all the required leather template shapes for each car programmed in, and can spot the chalk on the hides using a camera. Using clever computer maths gadgetry, they automatically work out how to most efficiently take the required bits from each hide, and cut them using extremely sharp blades. I was hoping for sci-fi lasers, but it’s still impressive to watch a computerised arm wielding scalpels and cutting out leather. This sums up a great deal of the modern Bentley methodology. Where possible, they’ll use traditional manpower to create their cars. But if the job can be done better by a machine, then they’ll bring in the mechanical stuff. 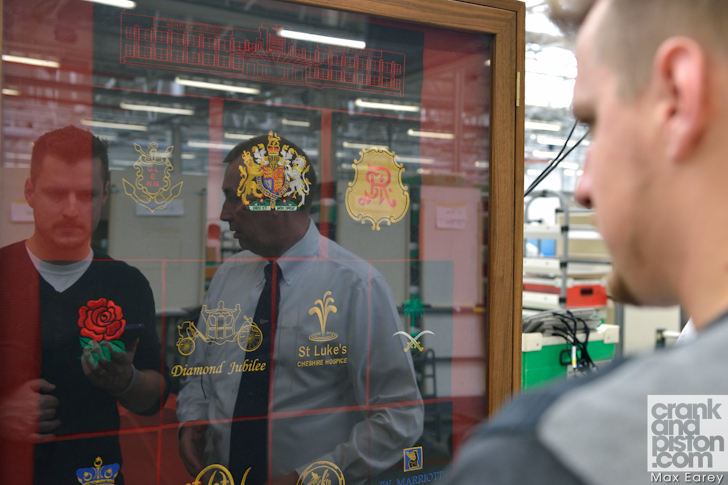 The finished, cut bits of leather are boxed up, a separate box for each car. And then they head to the Sew department. Many customers want some embroidery on their upholstery, and that’s carried out by machines, almost like printers that use threads instead of ink. If you can put it in a file, you can have it on your car. Again, it could be done by hand, but it’s quicker by machine.

Now it’s time to put the various bits together. And despite all the world’s technology, there’s nothing better for doing that than your common or garden sewing machine. A team of 62 – mostly women, but a few men too – sits across the building, studiously whirring away on machines that look a bit more hardcore than the Singer my mum used to use.

“We’ll let you have a go,” says Dave, “but please listen to the young lady as these machines are quite powerful and they can have your fingers under.” I’m sorry, what? I thought sewing machines were gentle creations used by grandmothers, not finger-chomping death-bringers. I wasn’t nervous before. But now I am. 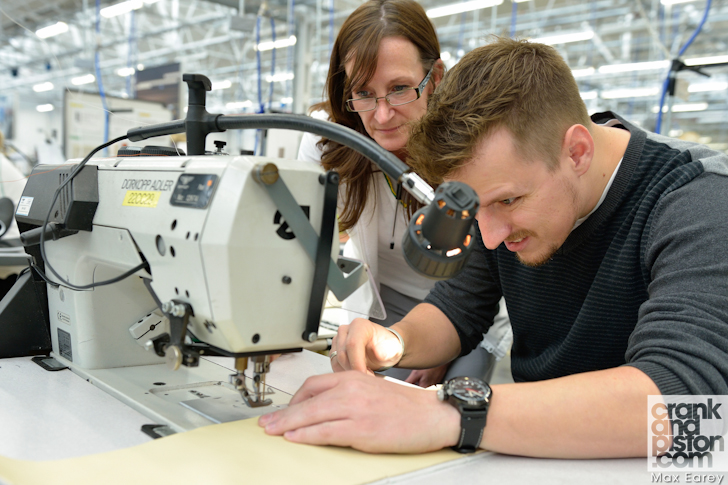 Helen is the lady tasked with showing me how to stitch up a headrest. There are notches on each part of the leather, which have to be lined up to ensure a good fit. Then both parts are put into the machine, which clamps down with a sharp-looking knife. A foot pedal operates the needle, and Helen whizzes through the first part. Thread stitches the two parts together, while the knife cuts off the excess. She makes it look very easy, but then she’s been doing it for 30 years.

I hop onto the chair. “You’ve got an eye guard there, in case the needle shatters and goes into your face, and a finger guard,” Helen says comfortingly. I tell her I never knew sewing was so dangerous. “Yeah, I’ve had a needle straight through this finger,” she replies nonchalantly. “It’s still in there, because they shatter when they go in. You’re not a machinist until you’ve had your finger under.”

I’m now terrified. Of a sewing machine. What’s going on? “Just be extremely careful,” says a slightly nervous Dave. I am. There follows a very slow, and not entirely accurate few minutes of stop-start sewing by a man increasingly drenched in sweat, convinced he’s about to weave himself into a Bentley’s upholstery. The start pedal is extremely sensitive, and even my performance car accelerator experience doesn’t give me a soft enough touch. The machine pulls harder the more you push, and I can see how it’s entirely possible to let it run away from – or with – you. By the end though, I have a serviceable section of leather, with an approximate straight line of stitching. There’s absolutely no way it’ll make it to a finished Bentley, but I’m quite pleased with it. Especially as I still have all my fingers.