Evo ME: Let’s start with the story of W Motors, how did you get to be here today?

W: We’ve had a big evolution… We started in 2006 with of W Motors and then six years later after getting the right partners on board – so that’s Studio Torino; Ruf Automobile and everybody else that’s part of this – we launched the company in 2012 in Beirut initially.

In the beginning of 2013 we had a car ready at the Doha motor show, the first Lykan Hypersport, showcased for the first time. From there it went on a global tour until we reached the Dubai motor show in late 2013 where we launched the first fully-functioning prototype of the Hypersport. From there we carried on with the development, so that at the end of 2014 we went to Yas Marina and did an official on track test drive of the car with one of our VIP clients. We sold seven cars, but of course only seven cars were made.

In 2015 we launched the Fenyr as a concept car at the Dubai motor show – it was positioned to be a more performance-orientated car, so we reduced the weight by 250 kilograms compared to the Lykan. In just a few years there has been a big gap in technology. We were able to create a car priced from around $1.4 million compared to the $3.5 million the Lykan cost, and we’re making 110 of these cars.

So you’ve come a long way from the first steps in Beirut?

ANow we have our design centre in Dubai, with two floors, one dedicated for electric cars and one dedicated to our special bespoke projects. W is no longer doing purely supercars. We’re doing different projects regionally – some of them are electric projects we’re doing in China with our sister brand Iconiq motors. It’s about mass production of electric smart passenger vehicles. We aim to deliver the first 100,000 units by mid 2020, so it’s quite a massive project.

Then we have an autonomous Level 5 vehicle, which is the first fully autonomous vehicle being developed for Dubai Expo 2020. It’ll be showcased in CES Las Vegas this January in partnership with Microsoft and AKKA technologies. This car was completely developed by W Motors, in-house, right here in Dubai. It’s going to be a big step to have this car driving around on our roads during Expo 2020.

Another surprise is out first ever police car which we have been developing with Dubai Police and the UAE Ministry of Interior for the past three years. It’s the first ever fully-connected, fully smart, fully-embedded, police SUV. We built the car in Germany, and initially we called it the Beast Patrol, and then His Highness Sheikh Hamdan renamed it Ghiath. The first batch of these will be delivered to the police this year. They have radars, 360-degree cameras, sensors, anything you can imagine as it was designed specifically for the needs of the police force. They have drones that take off from the roof to scan the environment. Ghiath is a pure police vehicle, but we will be launching a commercial version later on because it got a lot of attention.

Up next we will launch a new supercar. It will be a new segment. So you had the Lykan, the Fenyr, and next you’ll have something much more affordable. So I’m talking about the $300,000 range. This car is aimed to be fully assembled and made in the UAE.

Was your decision to set up W Motors in the Middle East because you expect your customer base to come from the region?

It is a Middle East product, but our biggest markets are the USA, Asia and Europe. However, the Middle East needs something when it comes to automotive. We wanted to be the pioneers to bring automotive technology to the region. We know it’s going to be a long process, but we’ve taken our time to do it and things are changing drastically. We have started seeing a lot of experienced people coming in with services that the region needs. The next step would be to start developing these technologies 100 percent locally. We are building our factory as we speak and it’ll open within a year – people will be able to come and see that we make cars here to an international standard.

And hopefully it will all lead to many others utilizing this expertise and maybe even start duplicating what we’re doing. And why not? In the Middle East we love cars, we love driving them, racing them, we love buying cars, so why not start producing them. 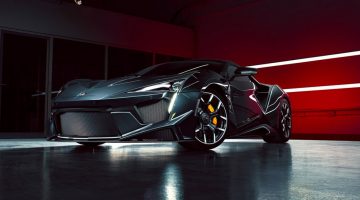