Our publishing editor starts this month’s update of our Management Fleet Volvo V40 from the back seat. And no, it’s not what you think…

“Hang on, are there no air vents in the back?”

This may seem an odd way to begin our update on our V40 long termer, but it’s nevertheless an apt one, since most of this month’s observations actually take place on the rear seats. So yes, a lack of proper rear passenger ventilation is not the best start.

Then there’s also the slight issue of getting in should you tower over the six-foot mark as several of us do at crankandpiston.com. The rakish design of the roofline is one we’re all very keen on, don’t get me wrong, but it does make bouncing into the rear seats not quite as practical as other rivals in the segment. Similarly both head and legroom – given the slightly smaller wheelbase – is at a premium. So, not all doom and gloom, since four fully grown adults can make a long distance journey in the Volvo, albeit feeling slightly stiff when they get to the other end. 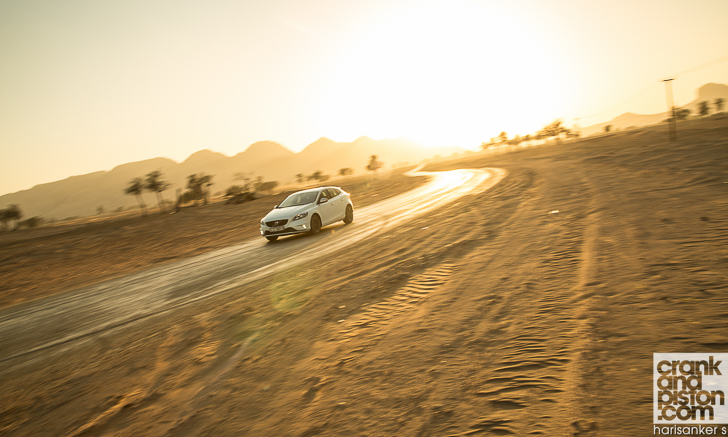 Move round to the front though and things do get better. The cabin design for instance: it’s not overly flashy or flamboyant. It’s just well-built and easy-to-use. I like that. There’s also the floating centre console, which while being a tad on the button-heavy side, is also a beautifully simple but elegant design. I REALLY like that.

Then there’s the seats, offering both superb lumbar support and comfort into the bargain. There’s also considerably more head and legroom, meaning calling shotgun for those previously stated long distance journeys is even more important. It perhaps doesn’t offer the same premium touch as other segment rivals – the ‘ker-chunk’ as the key is slotted into the dashboard does feel a bit naff – but let’s not forget that the Volvo costs less than a Volkswagen Golf. Helpful against such tough opposition.

Manoeuvrability is not too shabby either, there’s perhaps a hair too much understeer to truly lean on the nose but not an inordinate amount of bodyroll (and let’s be honest, you’re not likely to cornering like a demon in a V40). Still though it’s a plucky little brute, the four-cylinder offering strong if not wildly energetic turns of speed, the tyres plenty of grip, and the gearbox can withstand more punishment than you might think capable. Couple of niggles then but nothing that’d make us throw our hats down in the dust with disgust.

And there’s a reason for that. Namely 700km to the tank, with a bit of hyper-miling. Pretty impressive for a car of this size.