crankandpiston.com takes the all-new ‘sporty’ Volkswagen Beetle for a spin to see if ‘the cuteness’ still resides within.

It’s almost unthinkable to say this, but I never really was a fan of the Volkswagen Beetle. Certainly the original ‘people’s car’ was characterful thanks to its circular headlights, curved bonnet and unflappable simplicity (and Herbie did no harm either). But I never really warmed to it. To me the Beetle was the mark of an era long gone, a point re-emphasised when the ‘New Beetle’ arrived in 1998 and – inevitably – drew critical response. It didn’t drive particularly well, look all that good, or indeed grab the imagination in quite the same way as the original whose iconic name it was trying to revive. There was a ‘cuteness’ also to the design that left the retro styling a little hollow, and frankly made me feel a bit of a prat behind the wheel.

So when Volkswagen rolled up its sleeves and announced a brand new generation (only the third since 1938), I was ready to sigh with disinterest and raise a cynical eyebrow at a major manufacturer that clearly hadn’t learnt from its mistakes. How surprised I was then that for the 21st century, Volkswagen had forgone some of the Beetle’s iconic heritage and ‘cuteness’ in favour of something much more risqué: sportiness. 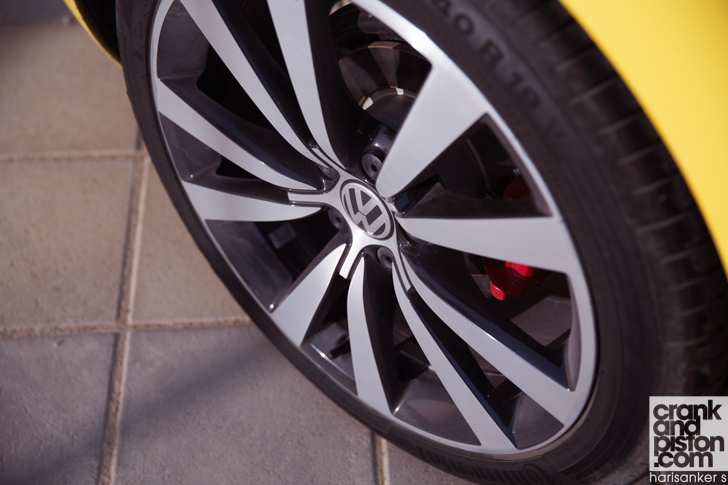 Open the bonnet – the rear-engined principle of the original is now long gone – and you’ll find a 2.0-litre turbocharged four-cylinder, lifted from the Mk 6 Golf GTI and just the first of many steps from a development program that leant heavily on both the Scirocco and the Golf (all three even share the same chassis). Granted power has dropped from 217bhp in the GTI to 207bhp in the Beetle, and coupled with a 7.3-second 0-100kph time, you could hardly call the newboy ‘fast’. Save the exhausted expressions though, since this would be a great disservice to the 206lb ft of torque, the new chassis’s stiffness and the handling in general. Turns out the Beetle is actually quite sprightly.

Acceleration from those four cylinders may feel a little sedate in the lower revs (throttle response is also on the refined side) but this changes when you hit mid-range. All of a sudden there’s a pull from the turbocharger that’s more aggressive than expected (that GTI family DNA shining through). Both litres are suddenly more energetic, and you’ll feel compelled to start throwing the front wheels into a corner at speed. In a Beetle. You may perhaps expect them to scrabble hilariously for grip, lean from the high-sided body making you fear for your front bumper against an upcoming guardrail. But no. With a new chassis comes a revised wheelbase, the new Beetle measuring 84mm wider, 152mm longer and 12mm lower than its predecessor, and thus providing more impressive weight distribution, a lower centre of gravity and a greater feeling of balance. Not wishing to tread on Scirocco/Golf toes, there is still some understeer from the front-wheel drive Beetle and composure through the turns isn’t quite as impressive as its VW stablemates or MINI’s rival Cooper S. But there is stability, and lots of it. Drop a few gears (smoothly) through the dual-clutch seven-speed gearbox and impressive engine braking keeps the already impressive balance in-check through the turns, that same VW unit offering swift changes to keep that mid-range energy from disappearing again (if you stick with ‘S’ transmission of course). Stoppers could offer a little more feel, but given that the Beetle packs 44kg over the GTI, it’s a tough ask. 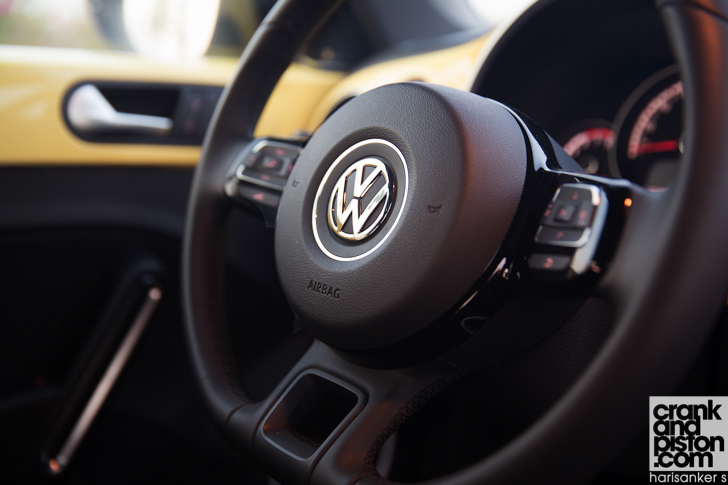 So, ‘energy’ and ‘sporty’ prove suitable adjectives for the all-new Beetle, which prove oddly apt for the new looks too. Styling favourites like the round headlights, flared side sills and bonnet swoop remain, albeit with some botox shots about the front and rear bumpers, some muscular new wheel arches and a surprisingly hefty rear wing. There’s still a ‘cuteness’ about the design that chills my spine, but overall it’s a big improvement. I’m particularly keen on the 19-inch ‘Tornado’ wheels and two-tone sunroof, which find a nice balance between ‘sporty’ and ‘sharp’.

This balance falls away slightly on the inside given the cavernous cabin space (as opposed to the slightly more driver-focused Scirocco cabin), ratchet handle seats and soft door cards, not to mention the very yellow Saturn Yellow trim. There’s a retro charm that Volkswagen has tried to instil with dynamism courtesy of the turbo gauge on the dashboard, über thin Golf steering wheel and paddle shifters, but the balance doesn’t quite work as it does on the outside. It’s a pleasant enough place to be, but doesn’t encourage you to drive quite as vicariously as the drivetrain and exterior styling does. Notch up a point for ‘retro’ over ‘Sporty’. 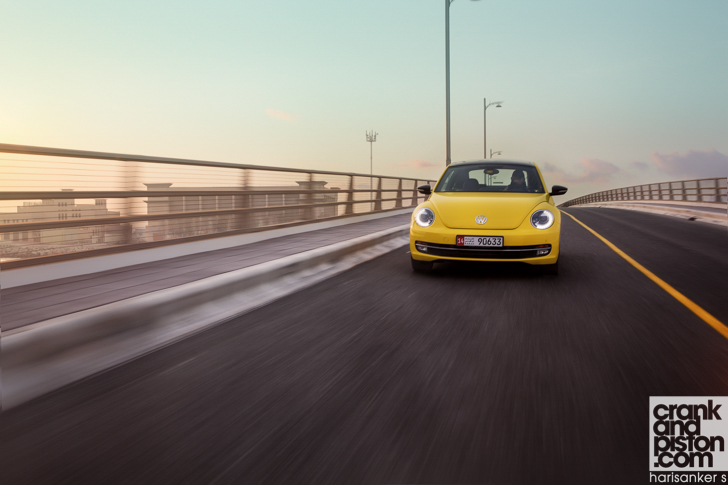 So, the third generation Beetle is a big improvement over its predecessor, of that there is no doubt. But I still haven’t warmed to it. The bold new look is a credit to VW’s designers, as is the chassis and powertrain to its engineers. But in making the Beetle sportier, Volkswagen has inevitably encouraged parallels between its most famous model and its flagship hatchback, and the newboy isn’t quite composed enough to rub shoulders with the Golf or the Scirocco just yet, two models for which my respect is enormous. And yet to classify the Beetle as a ‘sporty’ hatchback would be missing the point. Yes, there is renewed emphasis on dynamism, but there’s respect also for the character that made the people’s car a hit for close to eight decades, and the Golf and Scirocco have some way still to go before they can overhaul that accolade.

The new Beetle then may not have won me over completely. But it’s taken a big step away from ‘cuteness’, and for that we can all be thankful.