Take a look at the below footage. It’s terrifying, even without the on-board soundtrack, to think that a Subaru WRX can hit such speeds on normal country roads. And let’s not forget that this is the legendary Isle of Man TT course, which cemented the legacies of Joey Dunlop, Mike Hailwood and John McGuinness among so many others but has also taken the lives of 250 competitors over the years. It is not a course to be taken lightly.

Huge, HUGE props then must go to three-time British Rally Champion and all-round dude Mark Higgins who this past weekend – as you’ve probably already read – broke his own record around the circuit by nearly two minutes, lapping the TT course in 17m 35.139s at an average speed of 128.730mph (207.171kph). AVERAGE speed. Some of us hit those kind of numbers once in our lifetime when we’ve had a touch too much coffee in the morning.

If that’s not impressive enough, the below run wasn’t even the first time Higgins had broken his existing record that weekend: on the Saturday, the WRX posted a laptime 14 seconds slower than his run the following day, but still just over 90 seconds faster than the 19m 15.88s set in 2014 (117.51mph / 189.11kph). Try to wrap your head around that, remembering that – in the man’s own words – he “didn’t feel [he] was driving as well as [he] did on Saturday”… 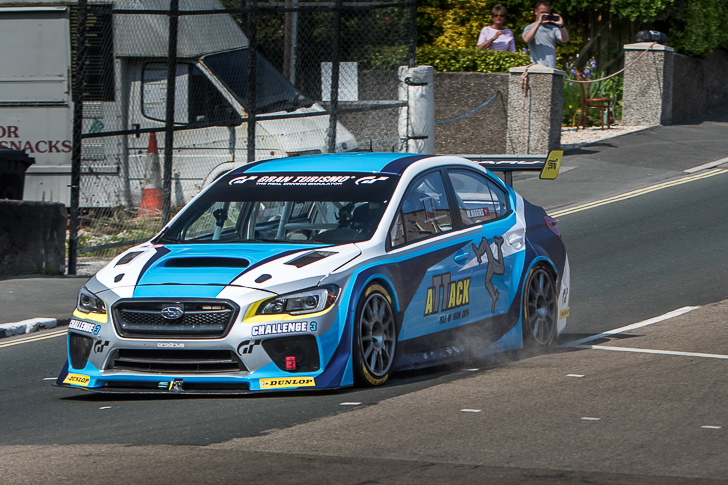 The new record was not just a result of Higgins’ hilariously oversized cajones though, the WRX STI Time Attack specifically built by Prodrive (with a little help from Subaru USA) putting in its fair share of elbow grease. Unlike the largely production-spec STI used for the 2014 record, the Time Attack features heavily revised bodywork built to FIA safety regulations as well as super sticky medium-compound Dunlop Sport Maxx slicks used by Subaru in the British Touring Car Championship. The engine meanwhile is a 2.5-litre turbocharged boxer four-cylinder, kicking out 600bhp, around 542Nm (400lb ft), and a speculated 290kph top speed. The drivetrain is completed by a World Rally Championship-spec paddle shift gearbox.

Suspension and damper settings – as well as the rake of the front splitter – have also been tuned for circuit racing, albeit with felexility for the TT course’s jumps. A lightweight build (shockingly), the kerb weight is touted to be less than 1200kg, giving the Time Attack a similar power-to-weight ratio as a Porsche 911 GT3. Leaning heavily on its Aston Martin Racing expertise, Prodrive has even included Drag Reduction System for added grunt on those long straights and improved downforce through the corners.