A new ‘Sensations’ video series takes us to the Dakar Rally Stages with Peugeot on its Dakar Rally return.

So far the 2015 Dakar Rally has been all about Nasser Al-Attiyah, the Qatar Rally Team, and the MINI ALL4Racing. Despite a 2m time penalty that allowed X-Raid teammate Orlando Terranova into the overall lead on day three, Al-Attiyah was back on top by a sizeable 8m 15s over fellow former Dakar winner Giniel de Villiers as the endurance event hit day four. A different story altogether from the out of luck Nani Roma, last year’s event winner languishing 55th overall and nine hours behind the Qatari after oil pump failure.

Al-Attiyah’s though is only one story on this year’s Dakar, the other being the return of former event winners Peugeot. The two-wheel drive 2008 DKR enjoyed a quiet run on the first day before issues dented the progress of Peugeot drivers Carlos Sainz, Stephane Peterhansel and Cyril Despres respectively, with all three currently outside the top ten.

Like us though, you may be wondering how the 2008 DKR looks and sounds in action, and fortunately Peugeot has got us covered with its ‘Sensations’ video series. See what you think of Peugeot’s first Dakar entrant since 1990.

*Regrettably this year’s Dakar Rally has already claimed a life after Michal Hernik was found 300m off-course during the third stage. The Polish rider is the 28th competitor to have died on the Dakar Rally since the inaugural event in 1978. 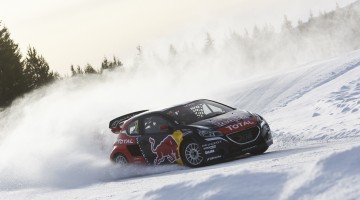