Mercedes-Benz preps its new show car – the G 500 4×4 – for the Geneva Motor Show. But is there more to that paint scheme than meets the eye…?

Seems Mercedes-Benz is as excited about its new G 500 4×4 [squared] as we are, given the promotional video that dropped recently. Like our recent test drive in the show car that will appear at next month’s Geneva Motor Show, the 4×4 in the video moves like the bejesus both on road and off it, leaves perplexed bystanders with jaws agape (in the video its mountain cats, in Malaga it was Citroen C4 drivers), and as in real life, looks cool as sin.

The video does however raise one key question. The men at the top of the G 500 development line (with whom crankandpiston.com on location) explained that the 4×4’s neon yellow livery was chosen for the video simply because it looked awesome, and that there were no plans to change the engine range in the foreseeable future. But given that the last vehicle we saw in this colour was the über green SLS AMG Electric – and given that the new 4×4 dispensed with AMG’s 5.5-litre twin turbo V8 unit for a comparatively lowly 4-litre biturbo – are we about to see a hybrid engine land in the G 500? 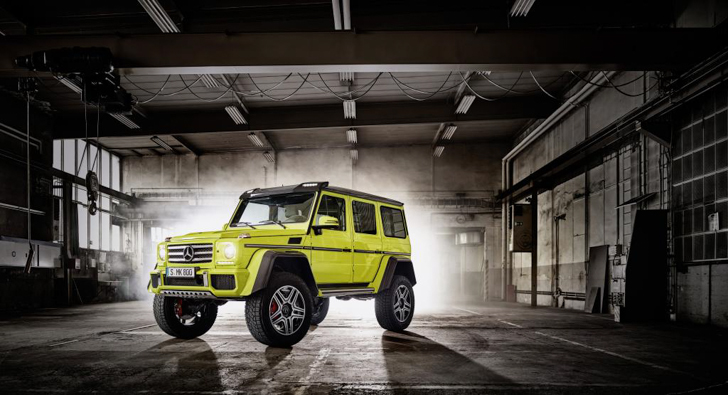 Think about it. Ever-more stringent emissions regulations have seen manufacturers ditching V12s for more efficient V6 turbos and speedier development of hybrid technology. Particularly with regard their SUV line-ups, of which the G-Class has been a key player since 1979 and for which Mercedes has no plans to pull production on one of its most popular models beyond 2020. That being the case, changes under the bonnet are an inevitability, and hybrid technology could – and probably will – yield a solution.

Ridiculous? Perhaps. But then so was the idea of a six-axle G-Wagen.