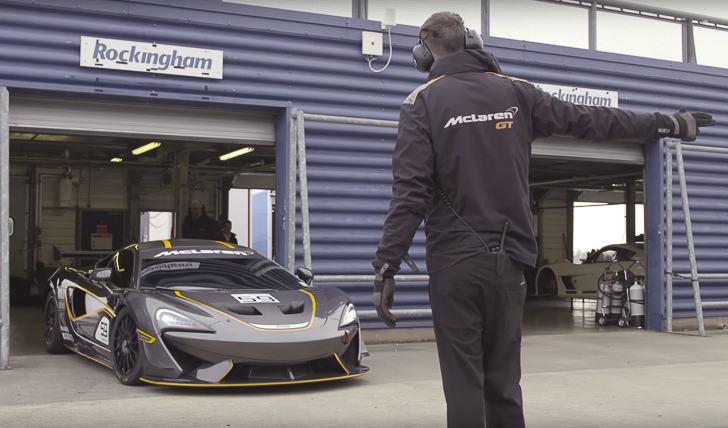 Remember the new 570S GT4 we mentioned a couple of months ago? Well McLaren has finally pulled the silks from it in the flesh, and for those of you who couldn’t attend its debut race in the British GT Championship at Brands Hatch, you might want to check out the below pre-season test footage from Rockingham instead.

Andrew Kirkaldy, whom you may remember kindly walked us through the 650S GT3 when it made its debut at the 2014 Gulf 12 Hours (there’s a few details on that HERE), gives us the low down on the new GT4. Yes, we’re all aware it has McLaren’s established 3.8-litre twin-turbo V8 as well as the carbon fibre MonoCell, but the track-model also features FIA-mandated fuel cell and roll cage, centre-locking wheel hubs, and a revised aero package, the most notable items of which are the front splitter and massive rear wing. All of which, apparently, ran smoothly during the day at Rockingham.

So, first test done and the debut race weekend in the bag (seventh overall, if you were wondering). Next step, customer sales. And, er, media race seat invites…[cough]…