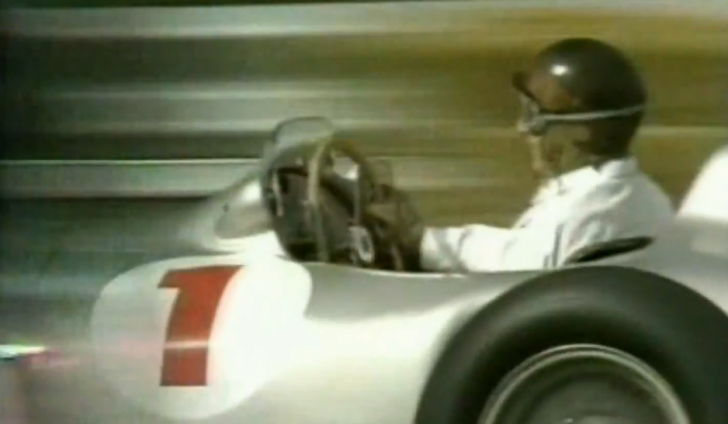 Motorsport history is filled with moments in time which we all wish we could have been there to witness. I consider myself pretty clued-in when it comes to the historic moments in Fangio’s career, a driver I wished I could have seen in action just once. So had you approached me at a party and started muttering on about “that time in 1978 when he raced Jack Brabham at Sandown” I probably would have thought you were an idiot and talker of nonsense. And then I watched this video. Amazing.

“A wonderful piece of motor racing history from 1978 Sandown, Super100mph just had to add this in the best quality as we could, dedicated to the Fangio and Brabham families, two power house names in motor sport history. Special thanks to Duncan, all credit to ABC Sport.

Fangio and Australia’s three time world champion, Jack Brabham, Bob Jane driving a Masarati, and former racer turned Holden dealer Bill Patterson driving a Cooper, had a spirited three lap demonstration/race with Fangio and Brabham clearing out and swapping the lead many times. Fangio was driving a Mercedes-Benz W196 that he raced in 1954 and 1955, while Brabham (not yet Sir Jack) drove the Repco V8 powered Brabham BT19 in which he won the 1966 Formula One World Championship. Brabham ‘won’ the demonstration, just ahead of Fangio, with Patterson and Jane some distance behind in 3rd and 4th.[5]

The 67 year old Fangio had been invited to the meeting by race organiser’s to demonstrate his Mercedes. However the great man stated that he would not demonstrate his World Championship winning Mercedes, he was going to race it. Fangio also intended to drive in a t-shirt like he had in his Formula One days, but had to conform to safety regulations about uncovered body parts and wore a full set of white overalls, though he was permitted to use his old goggles and Herbie Johnson racing helmet.

Despite not having raced competitively for 20 years, Juan Manuel Fangio was still the holder of a full FIA Super Licence.

The fastest lap of the demonstration was a 1:21.6 by Jack Brabham, almost 20 seconds slower than McRae’s fastest lap for the Grand Prix.”