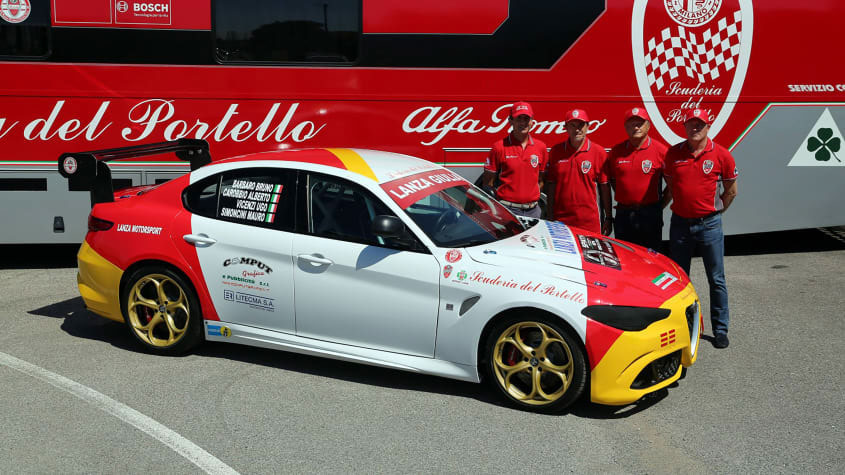 The new hardcore Giulia GTAm is all well and good, but Mauro Simoncini had something a little better up his sleeve. Having debuted at the 2000 Nürburgring 24 Hours in an Alfa Romeo 155, he’s now decided to take his very own race-prepped Giulia Quadrifoglio to the world-famous race.

Prepared by Lanza Motorsport, the Giulia will be raced by Scuderia del Portello, a team that has previously taken multiple Alfa Romeos to the N24. The announcement came on the 110th anniversary of Alfa Romeo itself, one that confirms the return of the four-leaf clover to the endurance race after almost two decades of absence.

Having prepared cars for 18 editions of the N24 over its 35-year history, Lanza Motorsport is well equipped for the task at hand. Though the Quadrifoglio boasts a relatively low weight figure from the factory, Lanza has managed to bring the figure down to just 1400kg, a reduction of 124kg over standard. This is thanks to the removal of all unnecessary interior components and the use of carbonfibre throughout – various parts have been removed and remade in the lightweight material.

An output of over 500bhp from a 2.9-litre twin-turbocharged V6 puts it in the high-power SP8 T class, with its reduced weight allowing its 0-100kph sprint to come seven-tenths sooner than standard – top speed has also been raised from 307kph to 200. The most obvious exterior modification is the introduction of a large rear wing, constructed to comply with the race regulations. If you have a keen eye, you’ll also have noticed the red insides of the exhaust tips, a nod to Italian cars of years gone by.

Given that it’s destined for the N24, this Giulia is fitted with all of the latest safety tech, including fire-extinguishing equipment, a six-point harness and an FIA-homologated roll-cage.