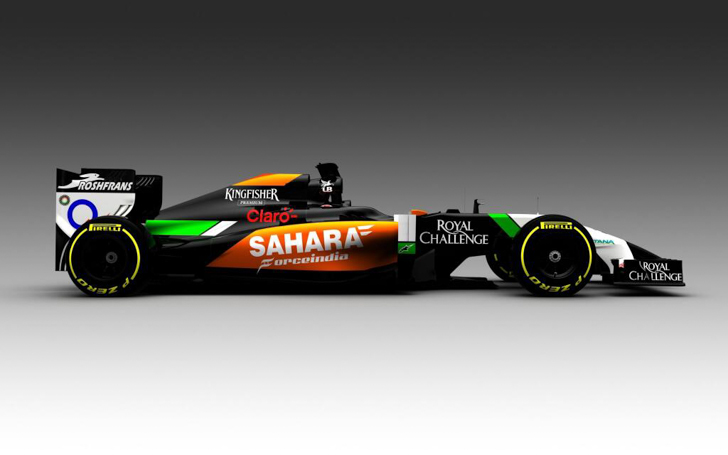 Force India is the first Formula 1 outfit to unveil its 2014 colours, and quite a sight the new VJM07 has proven too. In place of the Indian-owned team’s traditional orange, green and white colours, much of the white has been replaced with black in deference to new Claro (muchas gracias Señor Sergio Perez). It’s a good look, one that got us thinking about some of F1’s other unexpectedly cool liveries.

Just FYI, those of you expecting Jordan’s green 7Up 191 or Ligier’s blue and white Gitanes JS5 may be disappointed. What we have here are ten cool liveries from F1’s past that came as a surprise at the time, not necessarily the best. 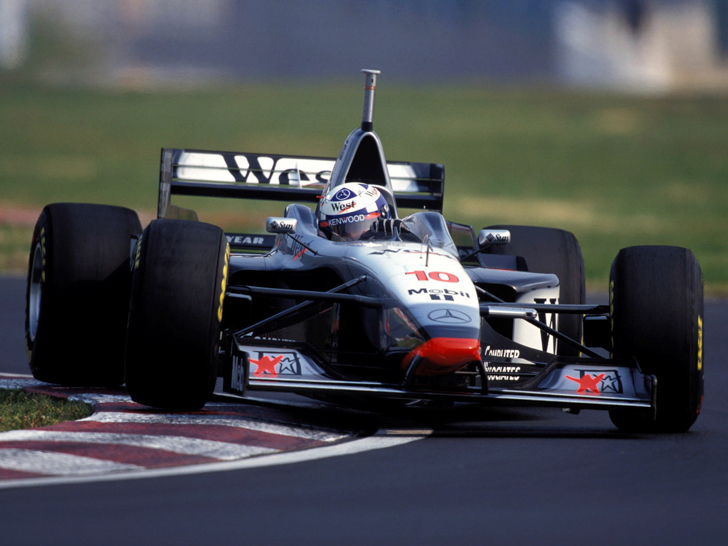 After 23 years of the now iconic white and red Malboro colours, a parting of the waves in 1997 led to a sharp new silver racing livery for McLaren in deference to new sponsors West. Give or take the occasional dalliance with red sidepods and Vodafone sponsorship, McLaren has maintained the black and silver livery ever since. Mind you, the 1997 livery wasn’t the first McLaren to hit the rack without red and white colours… 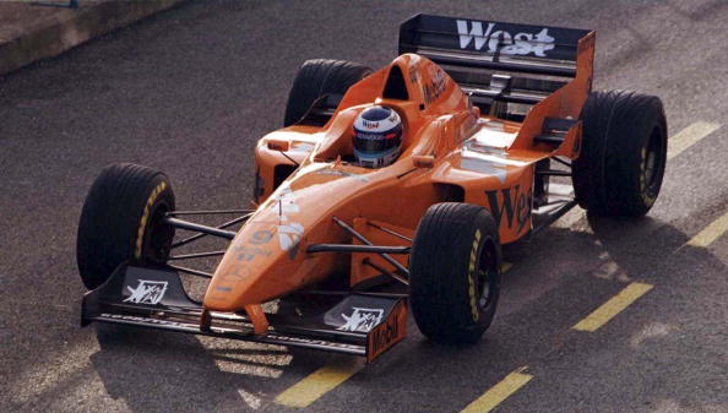 …since the traditional McLaren orange was used on the MP4/12 during pre-season testing earlier that same season. 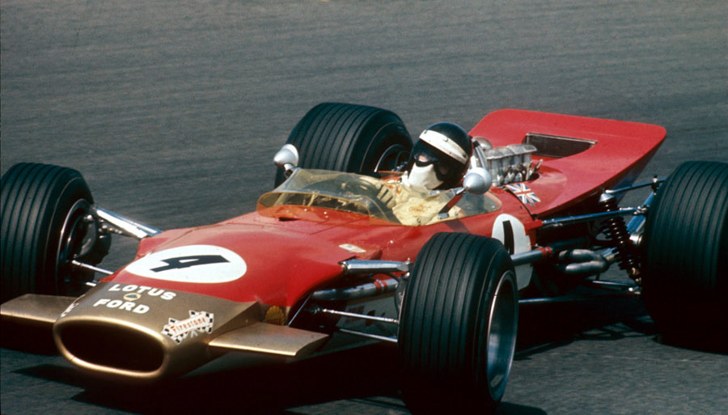 Before McLaren’s Marlboro stole the red and white show during the late 1980s/early 1990s, Gold Leaf staked their claim on this famous colour scheme when it debuted on the 1968 Lotus 49B. As well as being kick-ass, and despite only sticking around for three seasons, Lotus’ Gold Leaf colours also marked the beginning of the sponsorship tidal wave that would envelop motorsport forever more… 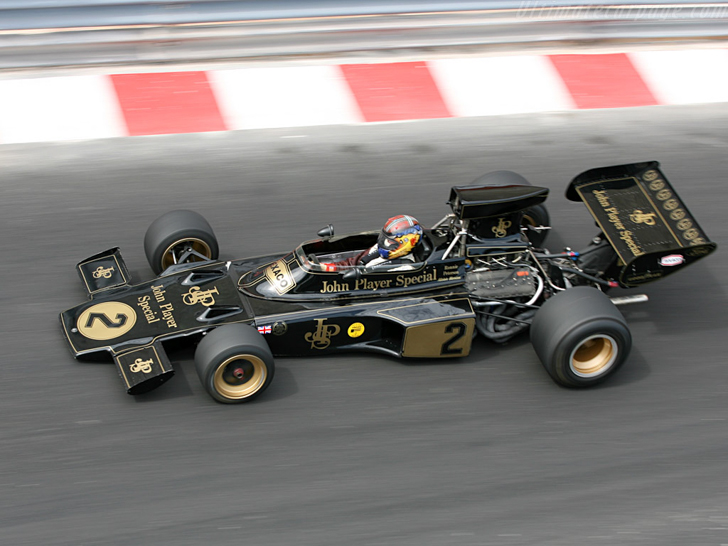 …one of the more famous examples being the John Player Special livery also pioneered by Lotus. In 1971, the striking all-gold Lotus 56B paved the way for the now iconic black and gold colours that debuted on the 1972 Lotus 72D. One brief ‘Essex’ livery change aside from ‘79-‘81, JPS was a Lotus staple until 1987, returning yet again in 2011 with the Lotus/Renault R31. 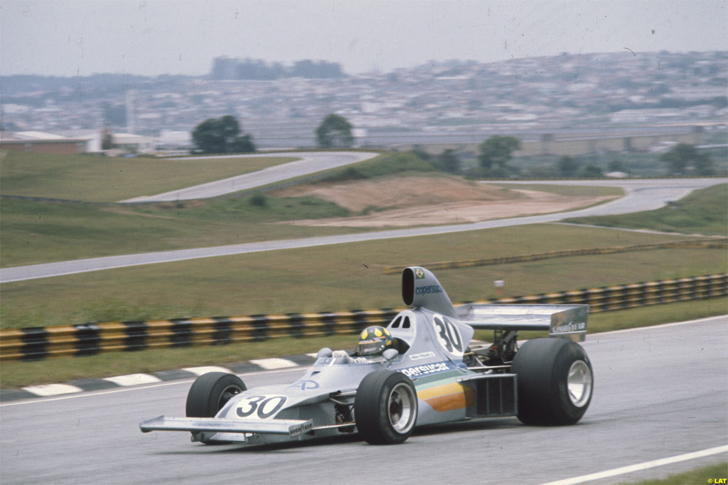 Anybody remember the Copersucar team? McLaren certainly do. They lost lead driver Emerson Fittipaldi to the Brazilian newcomers ahead of the 1976 season (though considering they won the title with James Hunt that year, we figure they’ve forgiven them). What possibly surprised more than Fittipaldi’s jump to family team was the ’75 car’s (the FD02) rather stunning livery: silver with hints of blue, green, yellow and red. You’ve got to admit, that’s pretty elegant. 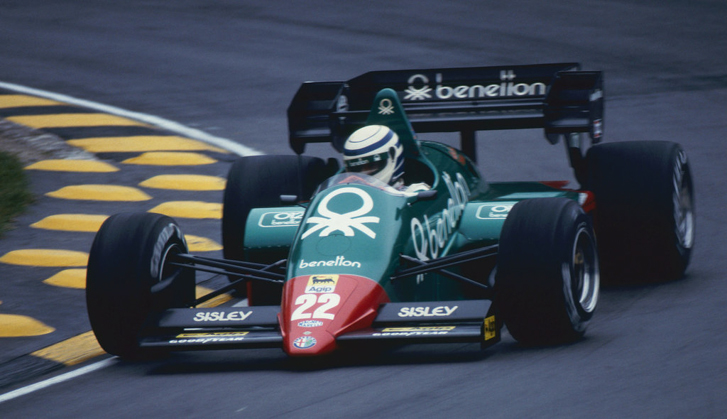 For 1984, Alfa Romeo switched from Marlboro colours to Benetton’s familiar green as the cigarette brand bid adieu to the Italian firm. A surprisingly cheeky livery though didn’t help improve results, with the 184T and the succeeding 185T scoring just one podium before the team folded in 1985. What a way to go out though. 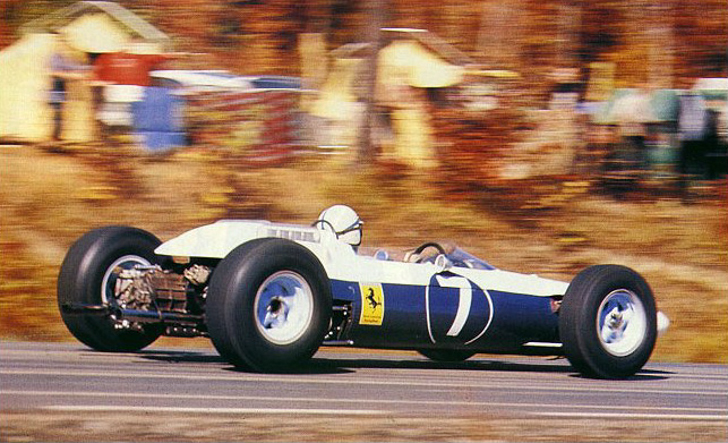 Wait, what? A blue Ferrari? Yep it really did happen. Owing to an increasingly heated fight concerning homologation of a new mid-engined sportscar, Ferrari’s 158 and 1512 fleet (both running a V8 and V12 engine respectively) were entered not by Enzo himself by through the North American Racing Team. Scarlet was given the boot in place of a new blue and white livery (which you may also recall seeing last year), draped in which John Surtees would win the 1964 F1 championship. Few Ferrari liveries are as memorable as this… 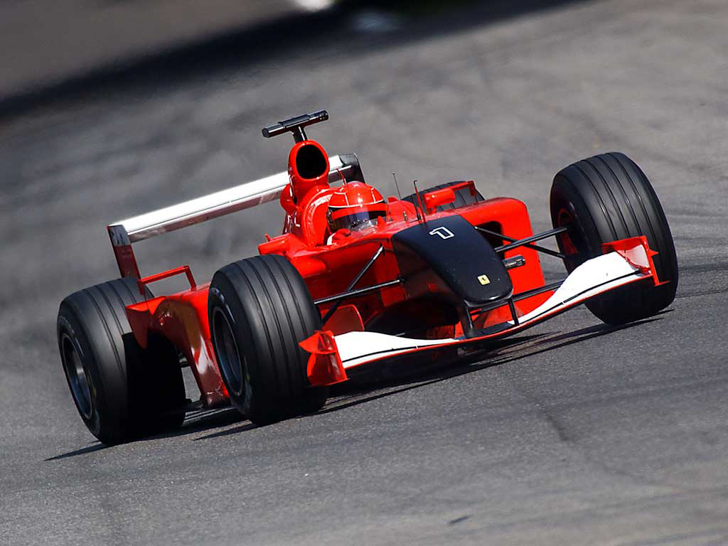 …except perhaps for this one. Shortly after the 9/11 attacks, Ferrari (at the behest of primary sponsor Marlboro) paid tribute by running their F2001s in the 2001 Italian Grand Prix without sponsor decals and with black noses. In an age when sponsor-laden cars were – and still are – the norm, it was a beautifully moving sight to behold. 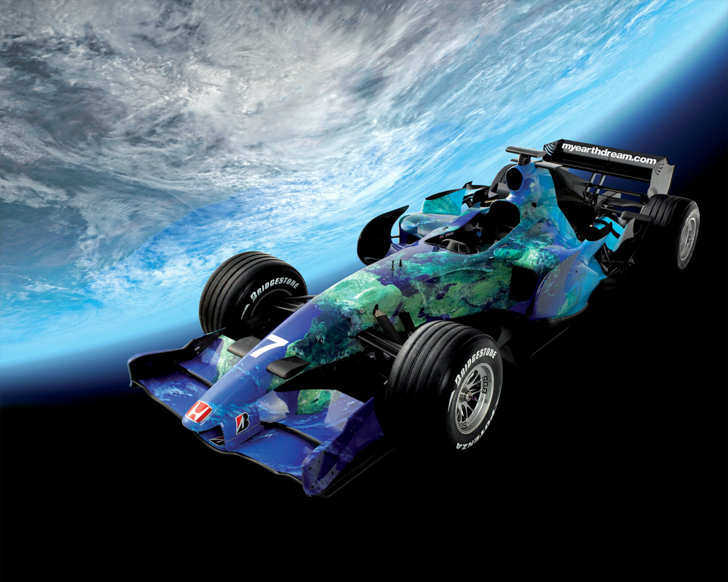 The jury is still out on whether Honda’s ‘Earth Dreams’ decision was a good livery in 2007, though it was certainly notable. In an effort to promote the company’s environmental policy, sponsor decals were stripped in place of one earth design, an idea that sneaked onto the succeeding RA118 too. Of course, the irony that two ‘earth’ cars spent 17 weekends out of the year burning fossil fuels to win a championship that promoted high performance cars didn’t seem to occur to anyone at Honda GHQ. 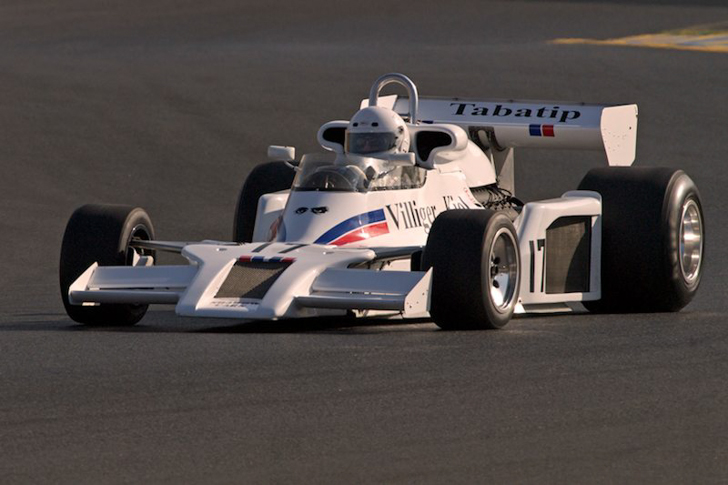 “It don’t matter if you’re black or white”. The Shadow Racing Team clearly agreed with the king’s lyrics, trading in its four-year all-black UOP livery for a white one with those now iconic Martini Racing red, white and blue colours, thanks to new money from Villager Kiel. A shame that the red that came with the 1978 car made it look like an all-day sucker. 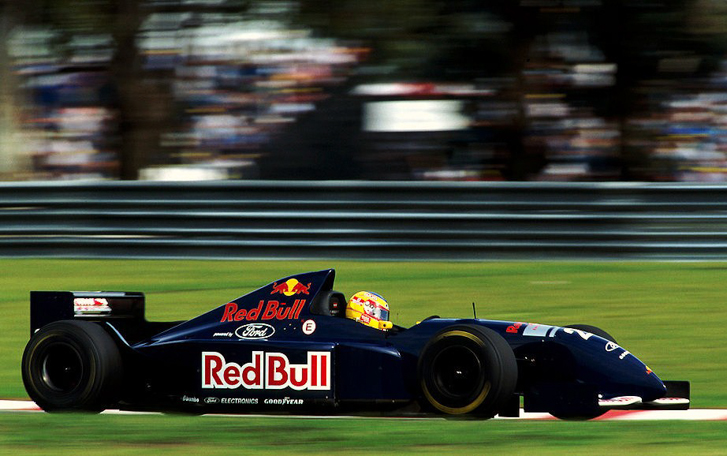 Okay, so not the greatest looking single seater we’ve seen in 60-plus years, but the significance of Sauber’s 1995 livery – which replaced the black and white ‘magic eye’ design of 1994 – is difficult not to miss. Decked out in dark blue, only one prominent sponsor name stood out: Red Bull. Isn’t there a team competing today that uses a similar idea? 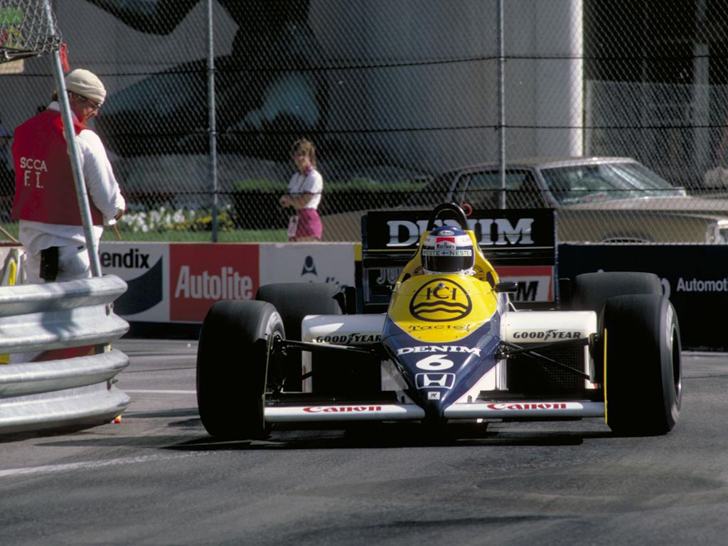 The car that brought the Williams/Canon icon together, and which coincidentally gave future Williams champion Nigel Mansell his first and second Grand Prix victories back-to-back. Eight years later the design had barely changed, of course by then the F1 community was getting bogged down with active suspension to notice. Enter Senna and Rothmans in 1994, and Canon was gone in a flash. 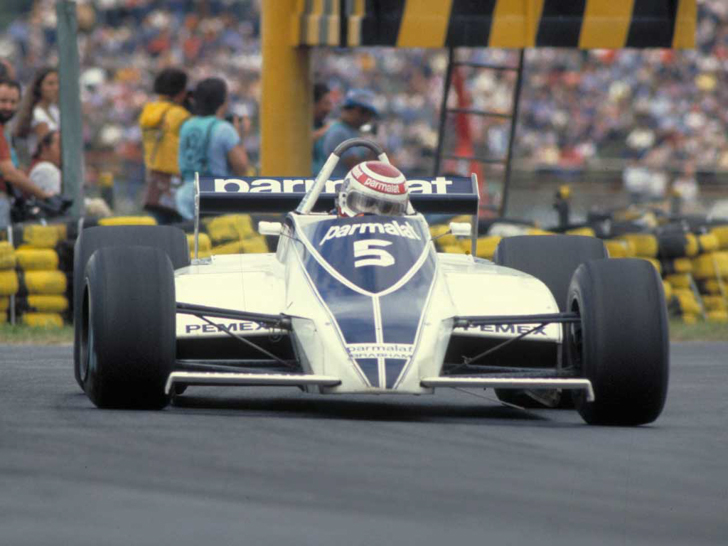 Derivations of Brabham’s BT49 competed in F1 across four seasons, one of its more significant being the 1980 model that ushered in Brabham’s now iconic blue and white team colours, bidding adieu to maroon as it did in the process. And rather lucky it proved too, scoring 49 points more than the year before and securing third in the Constructor’s Championship. It also brought with it two driver’s titles for Nelson Piquet in ’81 and ’83. There was also that turbocharged BMW engine and clever use of ground effects, but we assume championship success was down to the colour.

Have we missed one? Or are we simply talking out of arses? Let us know in the comments box below.

And now just for the hell of it, here’s five F1 liveries we’d happily choose to forget: 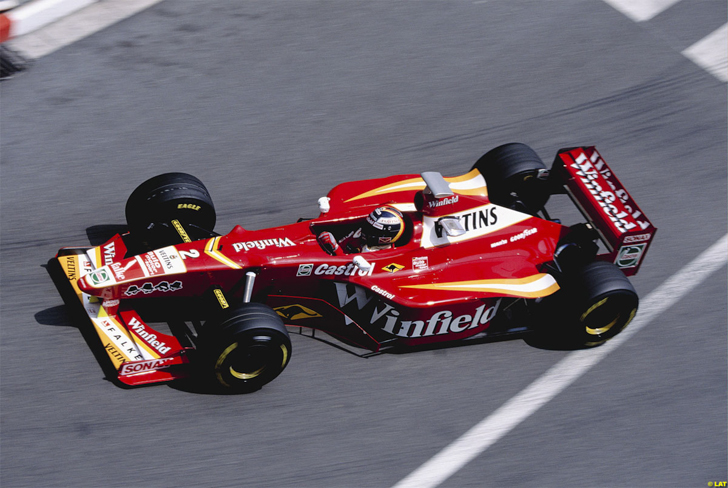 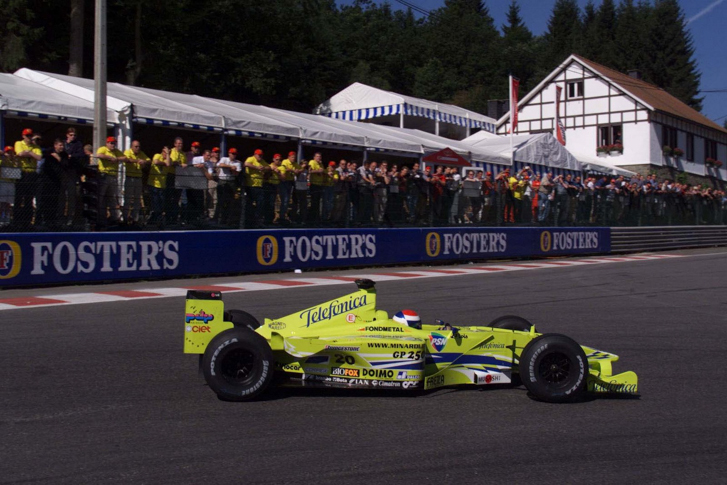 There’s a reason few teams have attempted the day-glow yellow livery in F1. It burns the retinas, causes the tarmac to melt through heat exhaustion, and dazzles spectators for all the wrong reasons. No real wonder Minardi opted for black the following year. 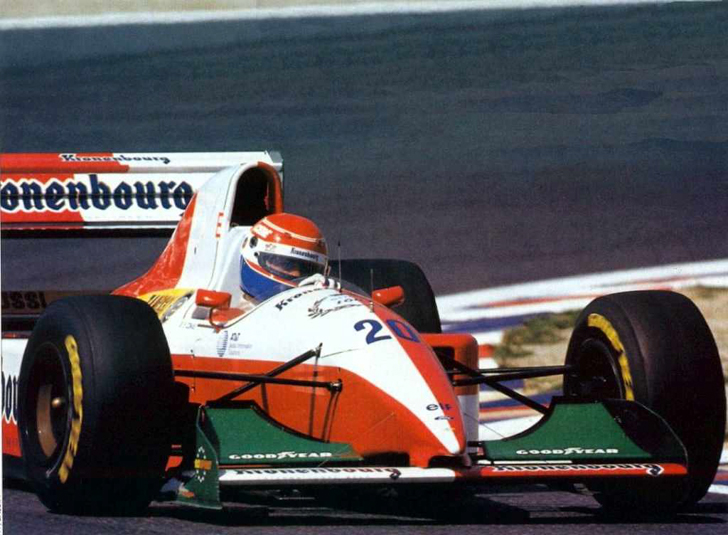 Larousse had some pretty atrocious liveries during its three-year spell in F1, but we’ll stick with the curtain-closing 1994 racing colours for this list. Red meets chequered white meets green rear wing. Sponsored by Kronenbourg. Urgh… 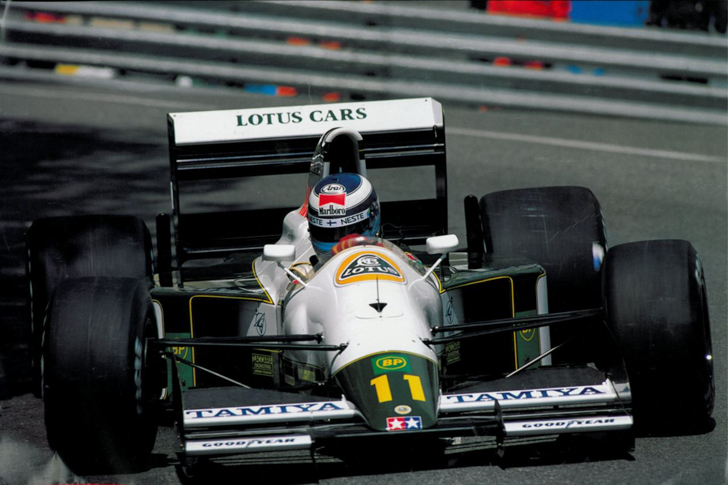 Just to show that Lotus didn’t always get it right. Fresh off four years of that famous Camel yellow, Lotus introduced a plain white 102B with only the TicTac and BP symbols offering any particular interest. Hardly JPS levels of grandeur, is it?

Don’t get us wrong, the Penthouse Rizla blue comes close to being on the other side of this list for obvious reasons. But compared with the white canopy with blue and red racing stripes on the 1975 308C, it just didn’t quite cut the mustard. Great pair of legs though.

Again, have we missed any? Let us know in the comments box below