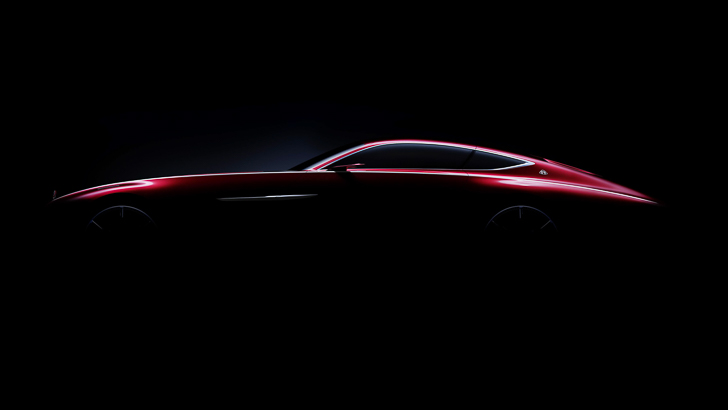 Pebble Beach is gearing up to be a belter this year. Not only will BMW showcase Elvis Presley’s fully restored ’57 507 Roadster and legendary Lamborghini test driver Valentino Balboni unveil his new line of ‘VB’ aftermarket titanium exhausts, but Mercedes has teased a new Maybach coupe concept destined for a production run in 2017.

Obviously there’s limited details to go on, but first things first. It’s big. As in SERIOUSLY big. At almost 6m, the as-of-yet unnamed concept is 1.5m longer than parent company Mercedes’ AMG-GT S and even manages to be 80cm longer than the flagship S-Class. So yeah. Quite long.

Mercedes remain tight-lipped on specific details, though given the long bonnet and sweeping roofline, the Aston Martin-like concept could share the same platform as Mercedes’ S-Class Coupe. And even though the concept boasts only two doors, its sheer size suggests four seats may not be out of the question. It may be as long as a long wheelbase Rolls-Royce Phantom, but the dimensions bring Goodwood’s 624bhp Wraith right into the crosshairs.

Engine options? Dream on, though the 530bhp 6-litre V12 from the S600 – currently the only model on Mercedes-Maybach’s fleet – could be a contender, as could a hybrid or all-electric powertrain, given Mercedes’ pursuit of green technology in recent years. The concept’s tagline though – ‘almost six metres of ultimate luxury’ – suggests luxury rather than performance is the primary objective.

Exact plans have yet to materialise, though a new product for the stately Maybach sub-division suggests Mercedes is looking to develop a bespoke luxury brand to rival Bentley and Rolls-Royce. Much as the original Maybach did back in the day with its 2005 Exelero concept. Remember that?

You can check out more Mercedes stories HERE