*NOW UPDATED WITH VIDEO*Renault Sport unveils its most powerful road-going model to date, the Clio R.S.16

There’s been a couple of examples as of late that life really does begin at 40. Volkswagen’s 40th birthday to itself – the Golf GTI Clubsport S – recently broke the production lap record at the Nürburgring for front wheel drive cars, and now Renault has unveiled the fastest road car to ever wear the Renault Sport badge, the Clio R.S. 16. Unveiled in Monaco ahead of the Formula 1 Grand Prix, the previously dubbed KZ01 concept (short for ‘crazy one’) was first brought to light when development began late last year.

The principal behind the R.S. 16 is quite simple, the Clio chassis receiving both the 271bhp 2-litre turbocharged four-cylinder and six-speed manual gearbox from a Mégane 275 Trophy-R for a winning combination of low weight, high power and compact packaging. Though the Mégane’s 1998cc unit weighs more than the Clio’s traditional 1.6-litre example, the six –speed manual shaves vital kilograms off the hatchback DCT automatic system, levelling the weight gain/loss as a result. Indeed, the resultant 224bhp/ton power-to-weight ratio is the largest of any road going Renault Sport model.

As well as new/borrowed propulsion, the Clio has also received the adaptive dampers and brakes from the performance Mégane, as well as chassis modifications to improve torsional stiffness and handle the 2-litre turbocharged engine. At the rear the R.S.16 track is now 60mm wider, incorporating as it does extended wheel arches, whilst at the back, the rear wing has been taken from a Clio Cup car – as for that matter has the rear suspension – to reduce lift at full chat by up to 40kg. Bumpers both front and rear have been aerodynamically revised for improved airflow, while the whole package runs atop 19in ‘Speedline Turini’, clad with Michelin Pilot Sport Cup 2 tyres. Again, from the 275 Trophy-R. Lot of hand-me-downs here: even the sub-frame from a Renault Kangoo van made the cut for the purposes of stability, and believe it or not, ECU software was also incorporated from a Dacia Sandero. 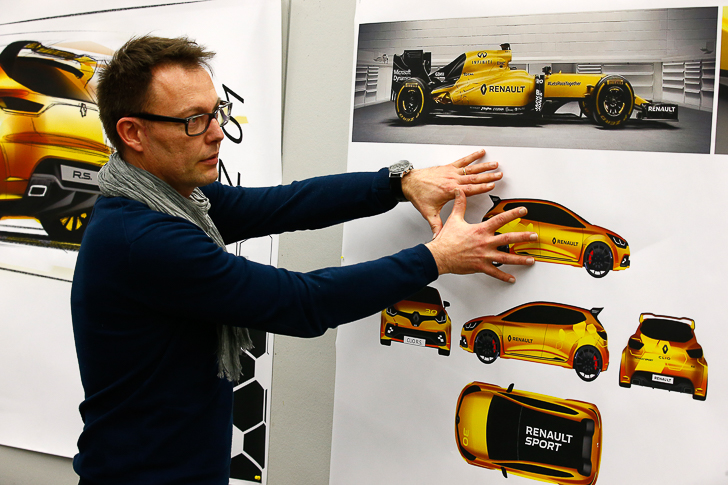 Inside, rather interestingly, there is no roll cage, Renault sticking with just racing harnesses and bucket sport seats for the two R.S.16 models that have been built thus far (though bear in mind, for the sake of weight saving, the air conditioning has also been given the boot).

Production plans remain a mystery, though the R.S.16 will make its next appearance at the upcoming Goodwood Festival of Speed. Oh, and Formula 1 fans will probably recognise that name, since the hatchback shares it with the single seater with which Renault made its official F1 return this year.

(Some) technical specifications available on page 2