Scalfaro GTO 1962 Bizzarrini. Made from an actual 250 GTO 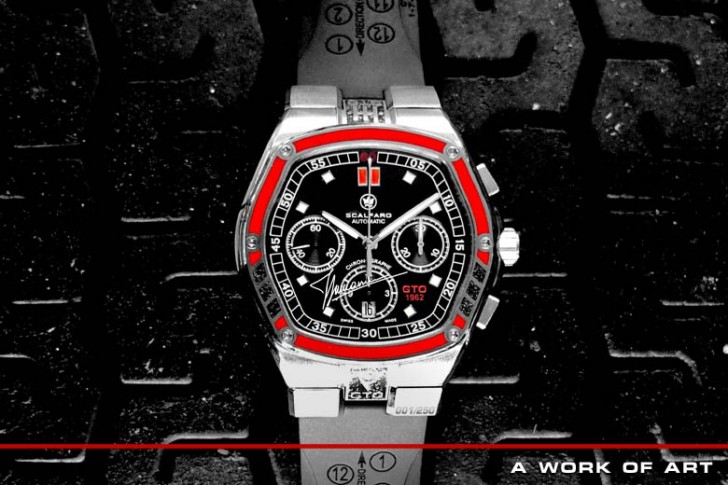 We have a tendency, when it comes to watches, to highlight the stylish, the tributary, the hideously expensive and the just plain bonkers. And with the GTO 1962 Bizzarrini Edition Chronograph from Scalfaro, we have all four nicely rolled into one.

The 1962 Bizzarrini as you may already have guessed is a tribute to Italian designer Giotto Bizzarrini, father (and often test driver of) the 250, the Iso Grifo, the 5300 Strada and of course the Ferrari 250 GTO. Though the manner in which they parted company rankled– with Bizzarrini one of several crew members getting the chop  from the Scuderia in 1961, which thereafter led to stints with arch rivals Lamborghini, Alfa Romeo and Iso – the Italian and old man Enzo still sealed their collaborative legacy with the beautifully designed GTO. Indeed, last year a 250 GTO sold for a quite staggering £20.2 million (around $31.3 million).

What really staggers with the 1962 Bizzarrini Edition then is that each of the 250 watches produced isn’t just a tribute to the legendary car or the designer. It’s the fact that each one is made from actual parts of the 250 GTO owned by Pink Floyd legend Nick Mason. We’d walk you through the rest of the special edition chronograph but frankly that would be an anti-climax.