The eight machines in this list – the Lamborghini Countach, the Shelby Cobra, Volkswagen Minibus, 1967 Ford Mustang, Porsche 911, Ford Model T, the DeLorean DMC-12, and Ecto-1 from Ghostbusters – may not necessarily have much in common, but we’re willing to bet you’d be happy hanging any of them on your wall.

With the help of San Francisco-based Sabrina Chun, you can do just that. Her latest body of work, ‘Blackprints’, depicts each of these models in white and in profile on a black backdrop. Simplicity itself, though that doesn’t mean the attention to detail is lacking. Impressive enough, since each print is available in either Mini (6×9-in) or Jumbo (24×38-in) size.

Now normally at this point we reel off a price for the artwork in question that leaves our readers with either a spinning head or in need of a lie down. Not this time though. Thanks to each print being produced on recycled card, just under $140 down up front will get you the whole 6×9-in set. And, more than likely, a fairly disgruntled girlfriend or wife.

In this video* – the opening Ricky Bobby Talladega Nights line we’ve decided to look past, thank you very much Miss Chun – gives us a glimpse into the artist’s enthusiasm for the genre. That basically means a series of pictures of Sabrina standing next to or sitting in a succession of high performance monsters, almost all of which – interestingly – are Ferraris.

Expect maybe a 599XX or a 250 California Spyder to be making its ‘Blackprint’ debut any time soon.

* Since crankandpiston posted this piece, the video has been removed citing potential breach of copyright. Miss Sabrina Chun might want to check where she gets her automotive shots from hereon in. 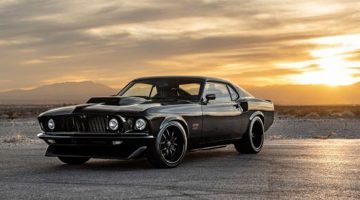