Ridge Park Speed in Louisville, Kentucky has just finished up its latest complete build, known simply as ‘The 40’.

Kevin and Shaun Lafferty (father and son operators of Ridge Park Speed) are no strangers to crankandpiston.com (you may remember their bare metal 1930 Ford Model A that was previously featured). And their latest project – ‘The 40’ – fits the definition of a hardcore hot rod to a tee. Its hard chop, sinister stance, big engine, and one-off wheels makes the truck look like it is going 120kph while sitting still.

‘The 40’ started as an original Chevrolet 1940 steel cab. The top was chopped 6” and then a custom bed was fabricated from scratch using 16ga steel and a lot of ingenuity. The chassis was fabricated from rectangular steel tubing and utilizes an underslung front suspension set-up that pays homage to the board-track racers of the 1920s and 1930s.

For this build, Kevin and Shaun made heavy use of their louver press that they built themselves. Both inside the cab and outside on the bed, the louvered aluminum panels containing nearly 900 hand-pressed louvers contrast against the Washington Blue paint that was applied by Howey and Son Automotive, also of Louisville, Kentucky. 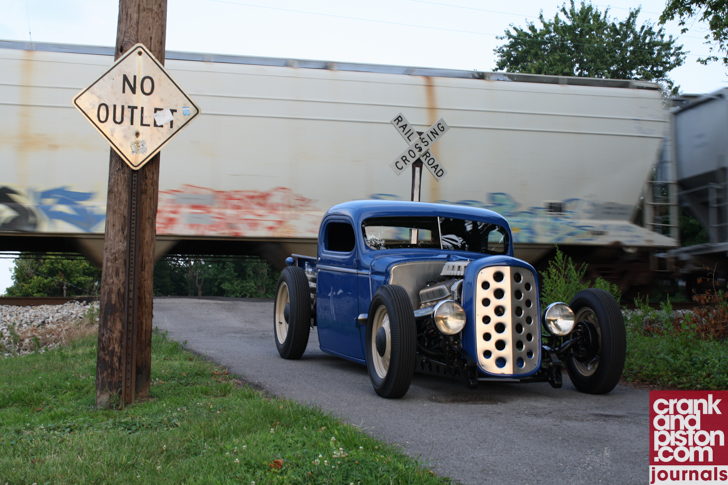 One of the more labor-intensive components of ‘The 40’ is the rear wheels. At first glance one may mistake these wheels for stock Chevrolet Artillery wheels, but further inspection reveals that these are 20”diameter as opposed to the factory originals (17”). Kevin had built several sets of 20” diameter vintage wheels for other builders in the region, but had never taken the time to build a set for a shop project. “This is the only set of 20” artillery wheels that exist. After all of the work I had to put into them, they are likely the last set that will be built,” said Kevin.

Ridge Park Speed operates a bit differently than typical hot rod shops. Kevin and Shaun do not take commissioned projects nor do they solicit outside work. Instead, they build one-two cars a year that fit with their own personal style. After displaying the truck at a few national hot rod shows, they have decided it is time to move on to the next project. “The 40” is currently for sale and will make someone a great hot rod.

*To see build pictures of the latest work rolling out of Ridge Park Speed, please visit them on Facebook. You can also follow them on Instagram @RidgeParkSpeed.