Let’s get this out the way right at the top. The Richard Mille Tourbillon Split Seconds RM 056 Felipe Masse Sapphire retails for $1.65 million, or six McLaren MP4-12Cs. Even by the ludicrously extortionate examples normally featured on crankandpiston, this particular watch is a huge pulse racer.

The RM 056 Massa has been around for just over two years now, originally debuted by Richard Mille at Salon International de la Haute Horlogerie (basically the Geneva Motor Show for horologists). What you have is the standard lightweight design thanks to copious amounts of titanium in the build, and nearly 500 separate components to the works, hallmarks of the Richard Mille brand. All of which are ‘protected’ by a sapphire crystal case: a 9 mohs hardness rating means the case is unlikely to get scratched (diamond is a ten), but we still wouldn’t recommend dropping it. 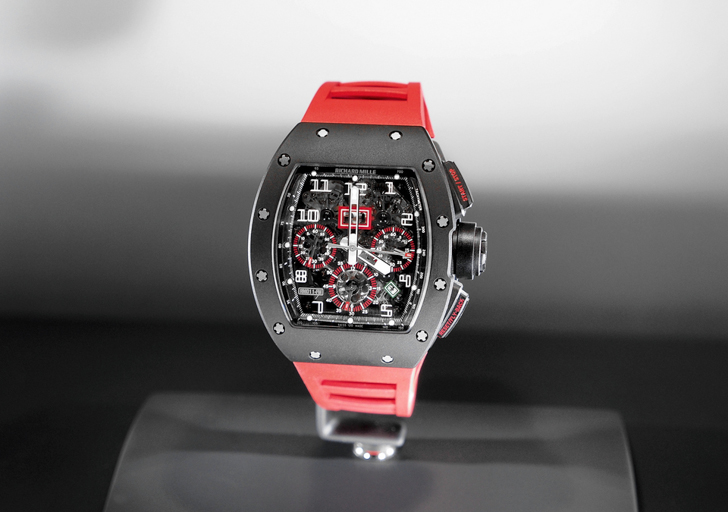 Earlier this year though, another model dedicated to the Ferrari driver was unveiled. The Richard Mille RM 011 Automatic Flyback Chronograph ‘Felipe Massa’ foregoes the sapphire crystal case in place of more rigid PVD coating, water resistance and a 55-hour power reserve. Oh, and a Ferrari appropriate strap. Maranello wants to keep the Brazilian on-board beyond the end of the 2013 Formula 1 season, but are looking for stronger results: 2nd place in Bahrain and Germany ’10 and Japan ‘12 are his best results since his near fatal crash at the Hungaroring in 2009.

Brazil 2008 must feel like a very long time ago…

Previous ArticleLamborghini Aventador. LP 700-4 Roadster
Next Article How not to start a motor race. ALMS, Baltimore