Renault is expanding outside of Europe by introducing the new Kaptur crossover SUV to the Russian market.

Renault has expanded its presence outside Europe with the introduction of the new Kaptur crossover SUV to Russia.

In four-wheel drive format, the Kaptur is the latest addition to Renault’s range in Russia where it rounds off the manufacturer’s crossover and SUV line-up alongside the Sandero Stepway, Duster and Koleos.

The front end features Renault’s new styling cues, including a bold Renault logo set against a gloss black background and new honeycomb grille. A key feature at the rear is the C-shaped lighting signature of the 3D-effect LED taillights.

The Kaptur is an all-terrain 4×4 crossover engineered to cope with the conditions that can be encountered in Russia, thanks to its high ground clearance of 204mm, heavy duty suspension and reliable all-wheel drive transmission incorporating a locking centre differential.

To the inside is a Media Nav system which covers all the basic multimedia functions, complete with a seven-inch touch screen display, a radio and Bluetooth connectivity for audio streaming and hands-free use of mobile phones.

Previous ArticleIs this what autonomous racers might look like in the future?
Next Article Shark announces limited-edition ‘Lorenzo’ replica helmet 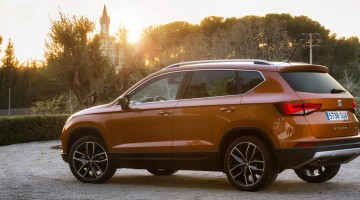