It’s been 25 years since the Renault Clio first appeared on the scene, but does the ‘grown up’ Clio R.S. still make our man feel young? 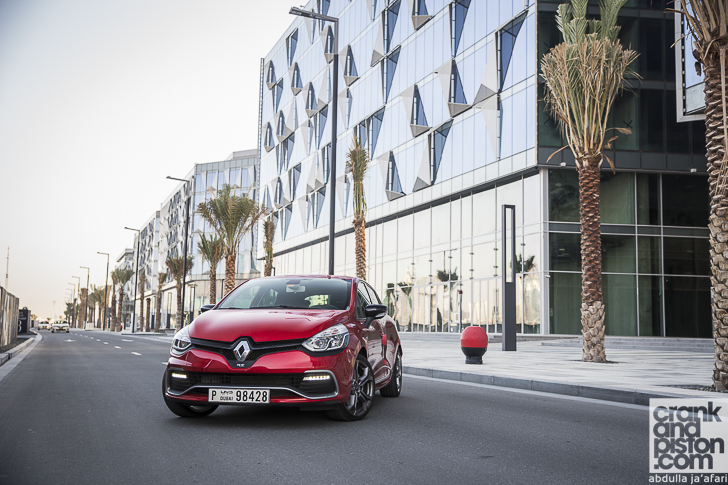 Some 25 years ago, a friend of mine showed up at my door step with a newly bought 2.0 Clio Williams – complete with blue paint and gold wheels – and asked if I wanted to drive it. Which I did, gleefully. And I could not believe how insane this 150bhp four-pot ‘city car’ was.

Angry and snarling getting up to speed in a straight-line (which took just under eight seconds, by the way), the real joy was feeling the rear end attempt to overtake the front with little encouragement. It fought back no matter how delicate you were at the helm, which inevitably meant you had to hurt this hot hatch to get the most from it. It was glorious.

The memory is still fresh, and has left me curious to see how the last of the current Clio R.S. holds up before the new generation arrives next year. 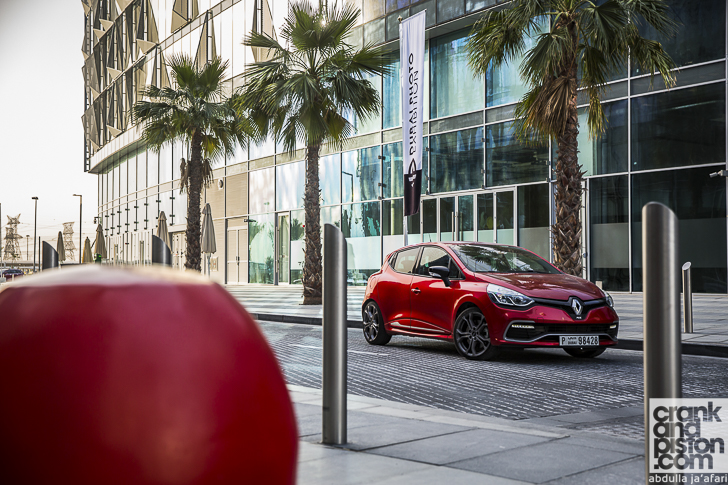 Since that day 25 years ago, Renault‘s most famous hatchback has grown up. A lot. Today it’s bigger, more powerful, more usable, more comfortable, and definitely less extreme. Yes, the cabin may include funky red seatbelts and kind-of-bucket seats, but the latter are more supple than figure holding, there’s plenty of headroom, and give or take a scratchy plastic panel or two, everything is well put together. There’s even cruise control, though in typically French fashion, you’ll have to look by your right elbow to find it…

As such, I feel immediately at ease with the Clio’s cabin design, like meeting an old friend who’s greying around the temples and has swapped his sneakers for a comfy pair of loafers. Let’s not forget though that this is still a Renault Sport. There’s an infotainment system complete with g-force meter, horsepower and turbo gauges, and anything else you might need to take your attention off your road, which proves overly complicated to use. 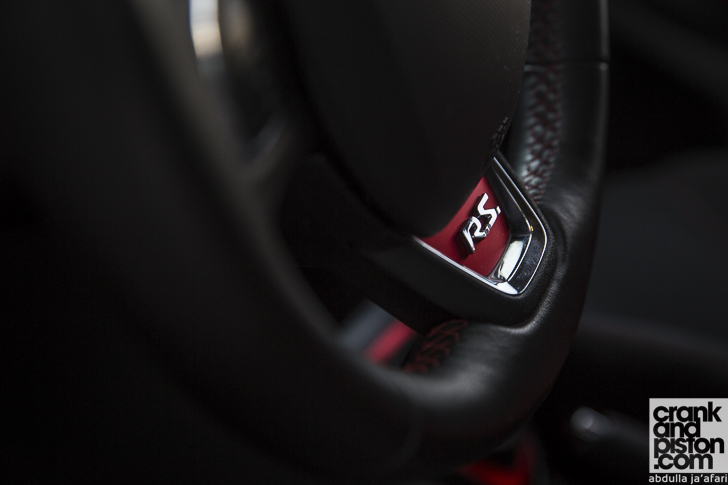 Plus, there’s the engine….

It’s a 1.6-litre turbocharged four-cylinder, spitting out 197bhp and 177lb ft. The figures and its performance in the lower revs suggest this is not something to get excited about: hit the loud pedal off the line and there’s more torque steer than we’d expected from this ‘grown up’, but few guts around the 2000 to 3000rpm mark mean the four-cylinder doesn’t really wake up until you hit 4000rpm. It’s a significant improvement when you do though, 197bhp offering a healthy kick and an audibly more basy soundtrack that results in the pick-up being tangibly more aggressive than before. It’s not quite up there with the Williams, but shows that R.S. DNA is still lingering beneath the surface. 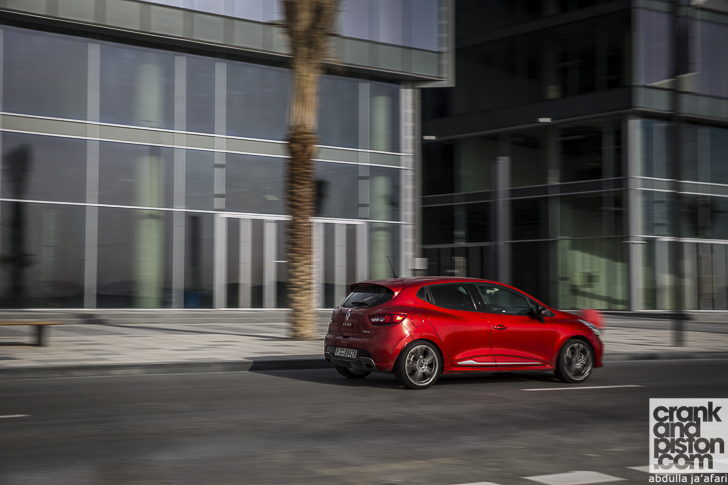 Said four-cylinder is mated with a six-speed dual clutch transmission, which – unfortunately – lets the side down. Slow speed changes prove too clunky, ruining the surprisingly smooth ride quality, while high-speed changes are too dimwitted to really hang the front end out. And no, there’s no manual alternative, which means you’re stuck with a box that upshifts automatically when you dance too close to the rev limiter.

Fortunately, despite the maddening gearbox, the Clio R.S. hasn’t lost its communication skills. Steering is precise, offering keen interaction with the front wheels, though some more direct feel wouldn’t go amiss: there’s a wonderfully neutral balance on turn-in, if perhaps not quite the immediacy of, say, a Golf GTI. Saying that, the corners are nevertheless Clio terrain. The back end is as lively as ever (more so than the GTI), every throttle lift or slight pressure on the brake pedal sparking progressive oversteer. If there is one downfall though, it’s the front wheels, which can struggle to stick to the line, offsetting the work of that well-balanced chassis. And that can prove distracting. 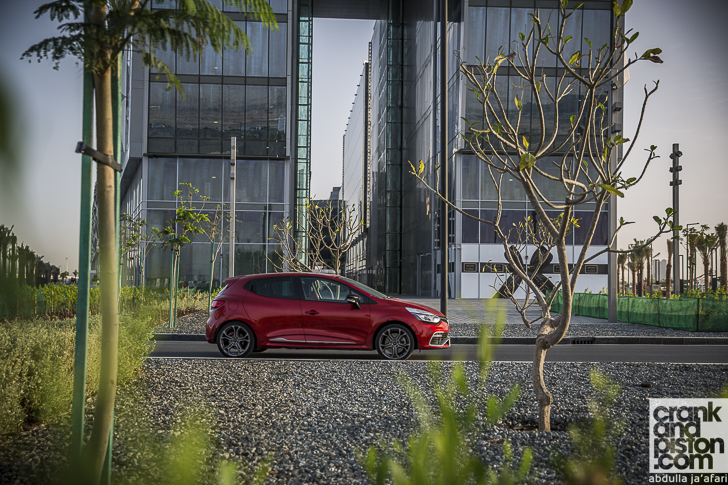 On the whole, the combination of direct steering, solid grip and beautiful agility makes the Renault Clio R.S. a very good entry-level model to proper driving. Plus, at just over $27K, pricing is reasonable too. The new generation still has its work cut out though: the snappy charm of Clios of old is difficult to find in this more ‘grown up’ model, and we can only imagine the difference a manual gearbox would make to the drivetrain’s dithery nature. As the Williams Clio demonstrates, these are things we’ll still be remembering 25 years down the line. 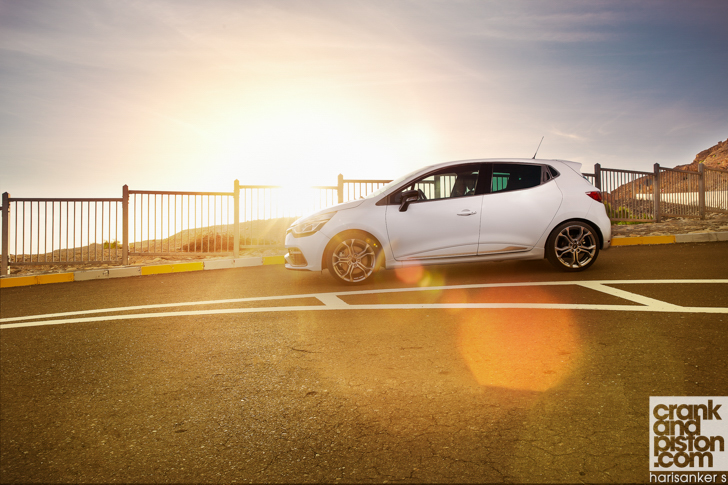