crankandpiston.com puts the new Renault Clio R.S. 200 Turbo through its paces on one of its favourite stretches of winding tarmac, Jebel Hafeet.

It’s 5am, the crankandpiston.com team is a stone’s throw from Jebel Hafeet’s oft-visited stretch of winding, mountainous tarmac, and the air is alive with the sound of a 1969 Alpine A110 1600S’ four-cylinder. Just a few kilometres further back we’d been enjoying the soundtrack to both a ’69 R8 Gordini and an ’06 Clio II V6, and now – just to keep things nice and contemporary – a ‘12 Nissan GT-R.

Nope, our music selection hasn’t taken a turn for the bizarre. The engine notes are actually part of the R-Sound Effect, a new app on the latest generation Renault Clio R.S. that replicates iconic engine sounds through the cars speakers, tuning it accordingly to the Clio’s speed and acceleration: there’s even the low-pitched whine of a 2038 Renault Reinastella Concept if you want to go full Twilight Zone. Largely pointless and on occasion irritating, it’s nevertheless a fun addition to the new R-Link multimedia system installed in the fourth gen model, as is the graphics display showing vehicle performance, turbo and brake pressure, real-time horsepower and torque usage, and G-Force readings. Both are just the tip of a funky French iceberg.

Of key note is the 1.6-litre turbocharged four-cylinder under the bonnet, an updated unit with direct fuel-injection, reduced friction and Variable Valve Timing exclusive to the Clio’s flagship model. There’s not a yawning chasm between the 197bhp (hence the ‘200’ in the name) and 177lb ft of torque found in the newboy and its predecessor’s performance, but the new Renault Sport still packs a 6.7 second 0-100kph sprint time and a 230kph top speed, which you could hardly call slow. Mated to the powerplant is a new – and, again, exclusive – Efficient Dual Clutch six-speed transmission, designed to drive gear changes to the hilt as well as improve fuel efficiency. Effectively too I might add, since the newboy kicks out 6.3L/100km compared with the outgoing model’s 8.2L/100km. 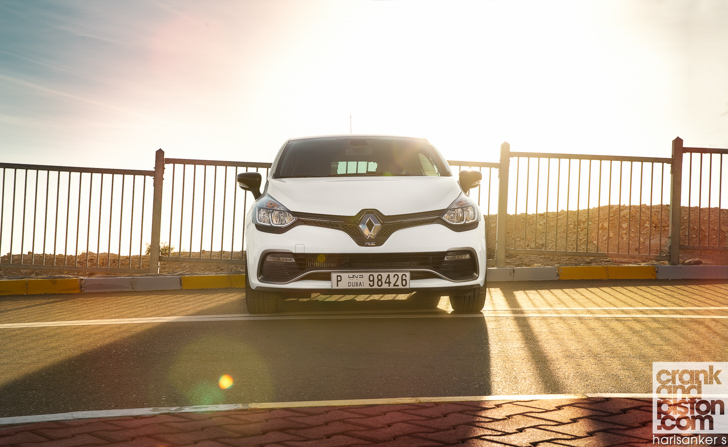 Purists need not fear that the Renault Sport Technologies designed hot hatch has gone soft though, the fourth gen model boasting a new rear diffuser and rear lip spoiler for improved downforce, stiffer struts front and back, and a Renault Sport designed chassis for that all-important road handling, plus refreshed bodywork, neat 17-inch ‘Tibor’ wheels and some cool twin exhaust tailpipes. And yes, your eyes do not deceive you. There are indeed five doors for the first time on a Clio R.S. But how much of a difference has this boatload of updates actually made?

Well if we take a look through squinting eyes at the front, we’re not off to the best of starts. Bringing to mind the time-honoured cliché ‘if it ain’t broke don’t fix it’, I do wonder why Renault felt it necessary to make the new Clio so…funky. There’s a slicker, more rounded front grille, a very air-intake-infused front bumper, a massive Renault diamond and elongated headlights: think ‘Bugs Bunny’, take another look at the front, and once you’ve seen it, you’ll never un-see it. From the correct three-quarter angle the rear does at least offer some much needed elegance courtesy of those muscly rear wheel arches and slimmed down taillights, but I can’t say I’m a fan of the new look. It smacks of trying too hard. 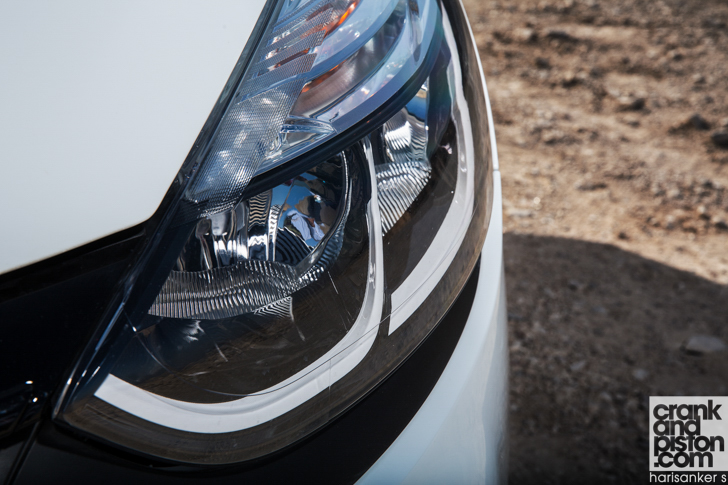 Inside things do start to improve, despite a few plasticky surfaces. The pseudo R.S. buckets look the part and offer plenty of support, holding the contours tightly through the turns without rattling your kidneys through your nostrils in the process. The multi-function steering wheel is nice and simple, the only possible distraction being the red R.S. lettering at the bottom, which actually fits in nicely with the red stitching, red seatbelts and red instrument needles. The centre console looks a little too bolted on to really convey a sense of Renault cool, but on the whole – with a surprising amount of head and legroom available – the Clio RS has clawed back some much needed kudos. A further example of which is demonstrated when we press the R.S Drive button and begin our climb up the hill.

We forego ‘Sport’ mode early, it’s nannying tendency to alert us to gear changes being made too high up the rev range getting on our pectorals quickly. In ‘Race’ though, ESC and ASR traction control are switched off for that full unleashed hot hatch feel, throttle response is heightened, gear changes are now purely manual, and pitch from that four-cylinder under the bonnet sounds angrier. Released from the warning beeps and R-Sound Effects, I can now concentrate on the Sport chassis through the turns (there is a Cup option available that’s 3mm lower and 15 per cent stiffer, but our test model comes complete with Sport). Unaltered by the change to ‘Race’, the updated suspension geometry has offered a surprisingly smooth ride without unduly affecting road holding through the turns, although I will admit that as our climb continues, there is more body roll from the 1204kg Clio R.S. than expected. Fortunately grip from that front rubber is such that there is little in the way of understeer, even when the anchors are thrown on late. 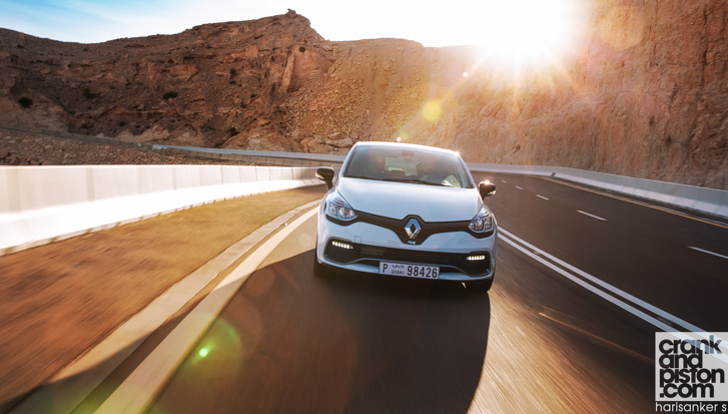 Braking later into the corner – a doddle thanks to the larger discs and progressive feel through the pedal – and jumping onto the power earlier consequently allows me to concentrate on my lines without losing the nose. Late and swift changes through the six-speed gearbox (there’s only 150 milliseconds between changes in Race mode) mean keeping momentum on the climb is easy, pull from the 1.6-litre turbo from much lower down the rev range than its predecessor allowing me to keep the nose pointed. Suddenly all the pomp and ‘funkiness’ of the new Sport that threatened to be so distracting is no longer an issue.

I don’t wonder though if, as good as the Renault Clio R.S. is, whether this all feels a little forced: whether the funkiness of the design, the ‘Race’ elements of the drive, and the brand new multimedia system designed to highlight elements of the vehicle’s sportiness or hide them altogether (namely the sound) is all really necessary. It feels sporty, characterful, and fun to drive, almost like the Clio R.S. is trying to prove something it really doesn’t need to. Four generations and more than 90K models sold prove that admirably. 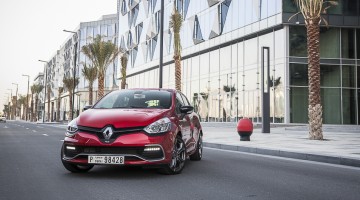