If you’re a fan of Khyzyl Saleem’s graphic art, you might be interested by a certain Yasid Oozeear and YasidDesign from Mauritius

Yasid Oozeear grew up with a passion for cars, but in the small country of Mauritius he wasn’t able to turn that passion into any kind of career. That all changed when he moved to the UK. Now, the 29-year-old has built up a large online following with YasidDesign, the brand he established to show off his skill in creating designs for modified cars. Indeed, in only a year, Yasid has established a business that does more than just create nice pictures for customers – it also helps modifiers turn their dreams into reality.

“We try and get a brief from each client, because they have a project in mind and we help to visualise what they want, and also create some ideas in their mind,” he says.

Taking inspiration from motorsport like GT racing and classic Formula 1, as well as companies like Liberty Walk and Rocket Bunny, Yasid has designed images and posters but also runs a consultancy service. He’s helped create concept cars and machines for computer games, and will soon partner with London’s Fully Loaded Cars to offer a full customisation and build service, delivering blueprints and 3D models for modifications. In addition, he’s collaborated with celebrities including Magnus Walker and skier Jon Olsson, whose Rebellion R2K you may remember raced a helicopter up a ski slope. 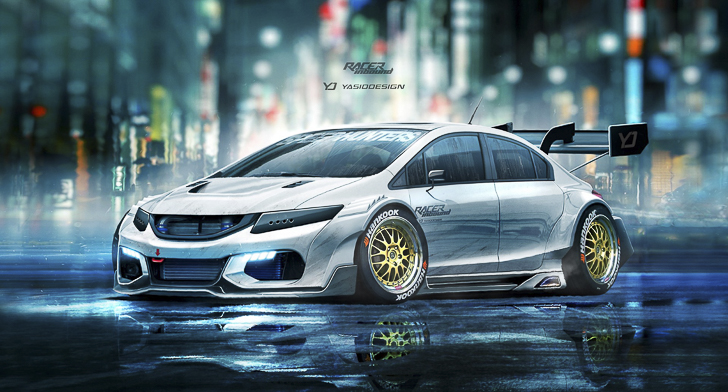 In the short term, Yasid hopes to expand the company to offer bespoke, exclusive designs for clients and move into higher end cars.

“We’ll design something as a one-off that won’t be available to someone else,” he says. “That’s what I want YasidDesign to be. But we don’t want to limit people, as bespoke costs a bit more. So we can offer the choice of making the same design available and that would mean it costs less. It’s a bit like licensing where you pay more for it to be exclusive.”

Further down the line, Yasid wants to realise a childhood dream – building a complete, engineered car under his own badge,

“I want to actually build a car that I can call my own design, not just a tune or conversion of another car,” he explains. “In a couple of years I want to focus on a proper engineered car, but it will take a lot longer than just establishing the new brand. Aftermarket is a good foot in the water towards my own vision, but I’m at the bottom of the ladder, at the very beginning”

In the meantime though, he’s concentrating on establishing his own brand, by designing wild modifications for his customers.