Not as wild and bonkers as the mid-engined Turbo, the Renault 5 GT Turbo was still a rather fine hot hatch 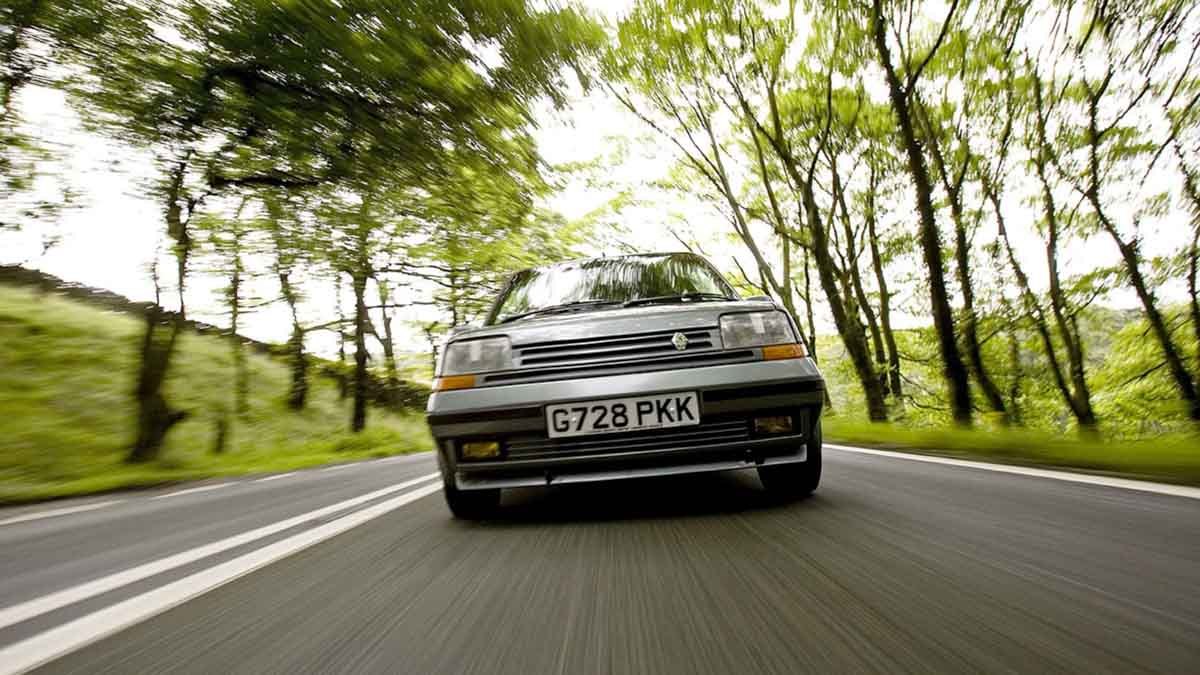 Mention the words ‘Renault’ and ‘hot hatch’ and chances are thoughts will immediately turn to the Clio – 197 perhaps, Cup or Trophy or the original quick Clio, the delectable Williams. While there’s no doubting these cars were perhaps the company’s finest hour when it came to hot shoe roller skates, it’s worth remembering that their Renault 5 predecessors were pretty handy too.

The original rally-derived, mid-engined Turbo will forever be an icon, but for those with more modest budgets Renault served up Alpine/Gordini versions, and when it came to the Mk2 5 it was a nailed on certainty that Renault would want a slice of the burgeoning hot hatch pie. Enter the GT Turbo.

It quickly became a darling of the modified scene thanks to its tunability – extracting more power from its turbocharged 1.4 was far easier than on a Golf GTI or a Peugeot 205 GTI, making it a popular choice for the go faster crowd. As a result, finding an unmolested example these days is harder than you might think and prices are on the up, although not to quite such an extent as the aforementioned Pug.

It’s a shame, as in its standard form the rapid Renault was actually a pretty good steer, with strong straight-line go and, thanks to extensive chassis modifications over the standard 5, a deft handler, too. Today, good usable examples are in the $12k bracket, with lower mileage or special edition models heading towards $18,000. Concours examples are $25k.

The 5 GT Turbo was launched in 1985, bringing some excitement to the otherwise functional and workmanlike second-generation Renault 5 range. The brand new 5 might have been little more than an ’80s remix of the 1970s original, but its Marcello Gandini lines looked good, even when adorned with the Turbo’s wide-grilled bumpers, thick arch extensions and ever-so-French yellow front fog lights.

Contemporary road tests largely agreed these add-ons were a bit tacky, but they’re very much of its time and hinted at the GT Turbo’s potency. Under the bonnet was the engine from the bigger Renault 11, a pushrod 1.4-litre carb-fed gasper fitted with a Garrett T2 turbo and an air-to-air intercooler. The net result was 115bhp and 121lb ft. In a modern context this might sound dismal, but in 1985, in a car weighing just 853kg, it was genuinely impressive.

It was still impressive almost a year later when the 5 GT Turbo finally made it to Britain and marched straight into the heart of a classic hot hatchback war, advancing boldly towards the Fiat Uno Turbo i.e. and the mighty Peugeot 205 GTI (1.6), both of which turned out just 105bhp. The 5 could hit 96kph from rest in 7.5sec and topped out at 201kph – both a significant improvement over its Italian and Gallic competitors as well as eclipsing many of the cars from the class above. And at $9100 it was competitively priced, too.

But the GT Turbo wasn’t just a fierce engine inside a roly-poly shopping car chassis, as Renault really went to town on the suspension too. The front springs, dampers and anti-roll bar were all new, resulting in a 38mm drop in ride height, whilst the changes at the back were even more fundamental, comprising a brand new V-section beam at the forward end of the trailing arms, plus an additional transverse torsion rod and a new anti-roll bar, both split in the middle and attached to a floating lengthways link that anchored to the main beam.

Renault claimed the net result was greater roll stiffness, reduced understeer and less risk of lift-off oversteer. It must have got it right too, because contemporary road tests found much to like about the GT Turbo’s performance and handling. Autocar called it ‘very fine indeed’, whilst Car said it was an ‘exhilarating drive’ and went on to include it in its Top Ten of the Year in 1987 and 1988.

In mid-’87 the GT Turbo enjoyed a light facelift, which gave it a body-coloured body kit, new stickers on the sides and seats trimmed in a fabric so 1980s that the design might as well have featured a picture of Limahl. And whilst the ooh-la-la yellow fog lamps remained, the never-popular fake ducts on the rear arches disappeared. The ride height was dropped by another 5mm all round and the front geometry tweaked, while, more significantly, the engine was given a bit of a tickle with new ignition mapping, better knock detection, tighter build tolerances and a water-cooled turbocharger, these changes ostensibly bringing better drivability and durability to a car that had earned a bad rep for hesitant hot starting and traffic-jam tetchiness. However, it can’t have been an accident that, less than a year after a revised 205 GTI had been massaged up to a matching 115bhp, the changes allowed the little Renault to now make 120bhp.

Without a trick paint job or remodelled panels you remember what a neat little thing the GT Turbo was, and the interior’s a bit of a novelty too, though mostly because of how amusingly retro it is with that uniquely old-school French feeling of thin and crappy plastic trimmings casually working their way loose from what’s actually a fundamentally tough hull underneath. Small cars don’t feel like this anymore, nor do they have such heavy unassisted steering and such weighty clutches. These are the things that make the GT Turbo feel slightly vintage, yet almost everything else about the way it drives is weirdly and endearingly modern.

‘Turbocharged cars these days have engine management systems that can massage and manipulate to mask the lost moments whilst the impellers spin up. The GT Turbo doesn’t, as a result of which it has a tiny moment of turbo lag, yet this isn’t frustrating or irritating in the slightest. Instead, the closest thing it compares to is the bridging bit to the chorus of “Don’t Leave Me This Way” by Harold Melvin & The Blue Notes (or, for appropriate ’80s-ness, The Communards). You know the part that goes “AaaaaaaaaaaAAAAAH… BABY!”? That’s the turbo lag in a Renault 5 GT Turbo; a sort of exhilarating build-up to the main event that makes it all the more exciting when it arrives. And when it does, the GT Turbo doesn’t hang around, because 120bhp is more than enough to make this little featherweight fly.

‘The really interesting thing about the 5, however, is the way it handles, in particular the way the front end just dives into corners and then feels quite unnaturally nailed to the road. Sometimes it’s almost as if it grips too much, and at the point where you’re expecting to turn the wheel more to get around a bend the car is actually digging in harder, forcing you to wind off lock. Anyone who’s ever driven a Clio 172 or its descendants would recognise the way the GT Turbo behaves, although if anything the older car’s rear end feels more benign and less edgy than that of its kid brothers. Add in the kind of weight change and gentle jittering through the steering that you don’t get in most modern cars plus a sweet, slick gearchange and the GT Turbo is a mighty slice of old-fashioned fun. More than that, it’s one of those cars that’s incredibly easy and fun to drive hard on a good road. Even the ride, reportedly more composed and gentle on these “phase 2” cars, is pretty acceptable and contributes to the easy fluency with which the R5 will flow along at a remarkable clip.

‘The GT Turbo has the qualities we want in all great hot hatches. It’s exciting, it’s addictive, it goads you into driving it harder, and when you do it’s on your side rather than trying to bite your arm off. In so many ways, most notably its uncanny front-end grip, firm but acceptable ride and fluid, easy gearshift, it feels recognisably like a Renault hot hatch. It feels like the place where it all began.’ 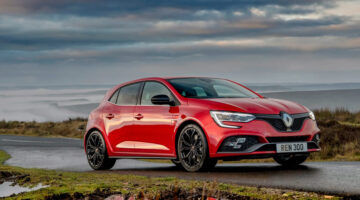 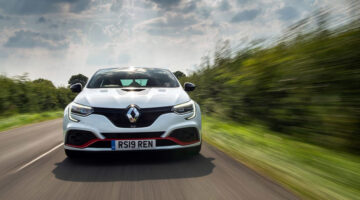 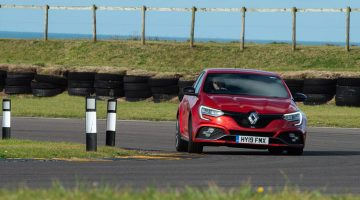