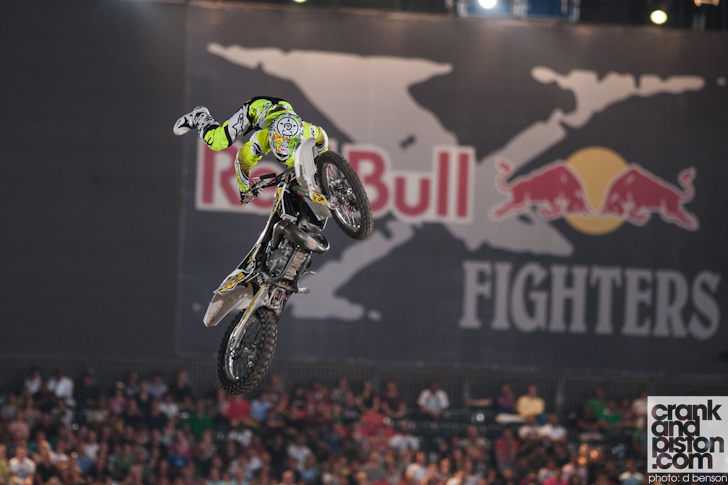 Melero’s next competitor Tom Pagès – the man to beat in qualifying – would prove a much greater adversary, and though Melero won the judges over with ‘Execution’ and ‘Course’, it was Pagès (FRA) who scored highest in three of the five event criteria being judged (the others being ‘Variety’, ‘Energy’, and ‘Style’) to advance to the semi-finals. Series veteran Dany Torres (ESP) would join him in the first semi-final, having comprehensively outperformed the returning Mat Berbeaud (SUI) by taking a clean sweep from the judges. 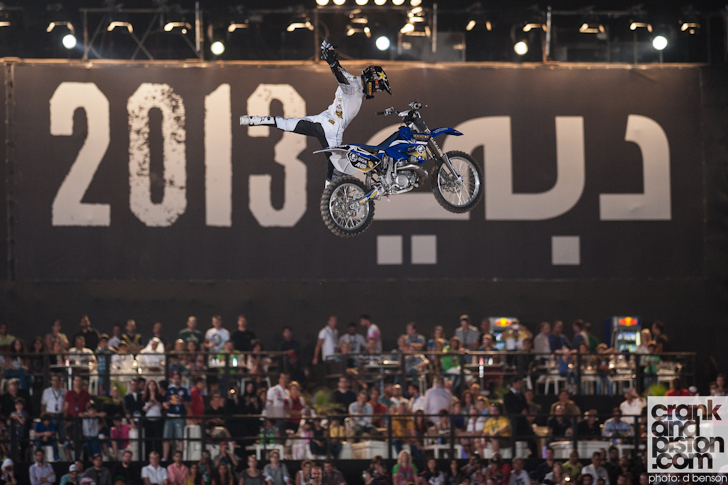 Rob Adelberg (AUS) and Libor Podmol (CZE) went head-to-head in their quarter final, Adelberg’s indy heel clicker flip trick putting Podmol’s Cordovaflip under some considerable pressure, though the judges – including head judge and long-time series advocate Jason Moriarty – eventually sided with the Aussie. Levi Sherwood (NZL) and David Rinaldo (FRA) would be similarly inseparable in the last quarter final, with the Kiwi eventually taking four criteria wins from five (losing out to Rinaldo only in Style). 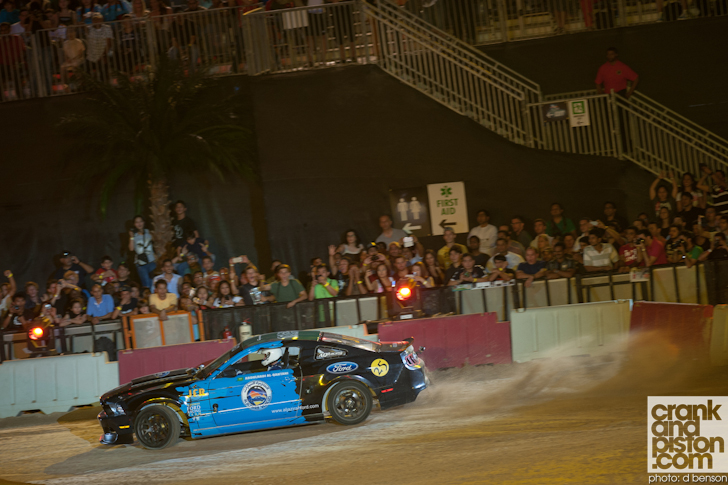 In an event dominated by FMX bikes, not many of us had expected a Ford Mustang drift car to take the centre stage, but Abdulhadi Al-Qahtani – with whom crankandpiston caught up for a few words pre-showtime, so stay tuned for that – took his Al Jazirah Ford Racing Drift Mustang for several lairy laps of the grandstands, filling in the front two rows as he did. Even ripping his rear bumper off on the sand didn’t slow him down, and the Saudi drifter received a hearty cheer for his efforts. 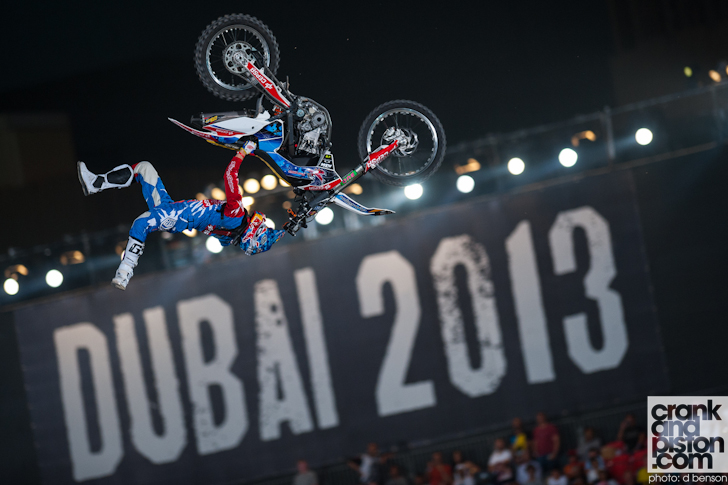 Dany Torres versus Rob Adelberg was the line-up for the first semi-final, the Spaniard narrowly pipping the Aussie with Style, Course and Energy to cement his place in the final. The real shock though came during Tom Pagès’ semi final run against Levi Sherwood when, just a few seconds before the claxon rang to single ‘stop’, the Frenchman misjudged his landing after a one-hand flair and ate the dirt hard. 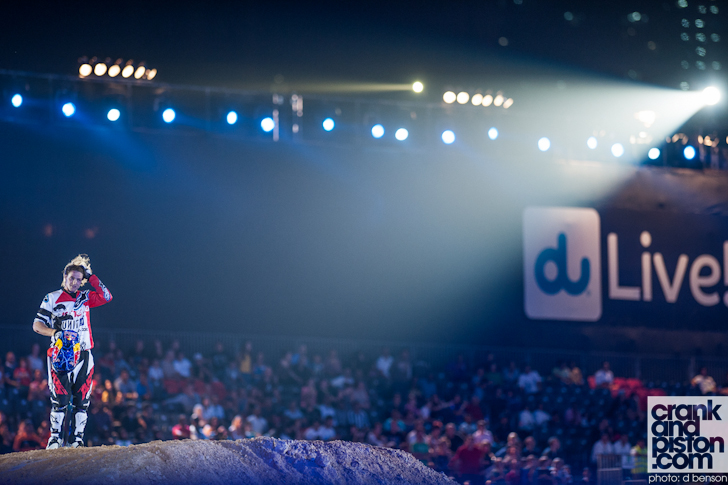 A little winded but otherwise unscathed, Pagès saluted the crowd, threw his goggles into the first few rows just in front of us, and trekked up the centre ramp to wave to the arena. His was the biggest cheer of the event, though it didn’t stop Sherwood scything past and into the final. 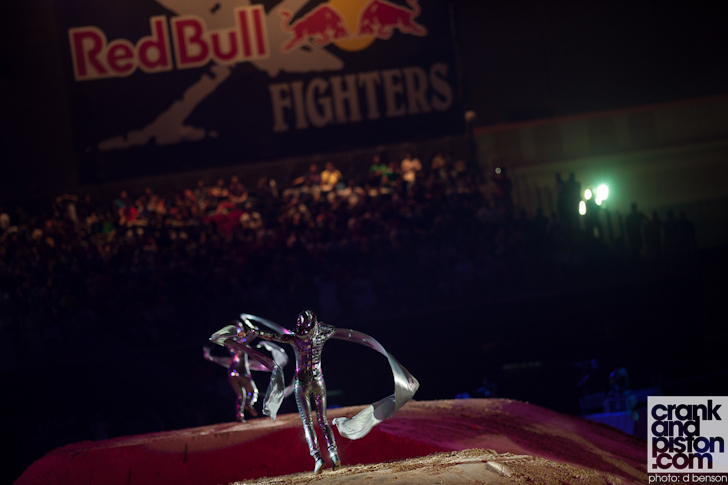 After the ladies in mirror-ball suits had done their respective turns, it all came down to Torres versus Sherwood for the X-Fighters Dubai crown. Both Torres – a seven-time Red Bull X-Fighters event winner since 2007 – and Sherwood – the reigning Dubai champion – would give it their best on the sands, but after a tense final vote, it would be the Spaniard who took victory in the UAE. 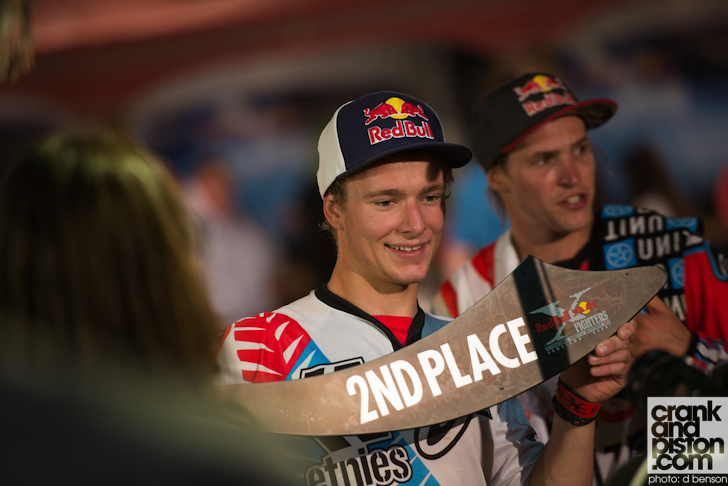 Torres, Sherwood and Pagès took their steps on the podium (with the Frenchman also taking away a 1000-euro Swatch for the event’s Best Trick) and held their scimitar-crafted trophies aloft while the backdrop exploded in ticker tape. A truly superb effort by all concerned, though we are still wondering how they got those trophies through airport security.