The all-electric Pininfarina Battista hypercar is entering the final stages of development, with the very first production-spec model to be shown later this month 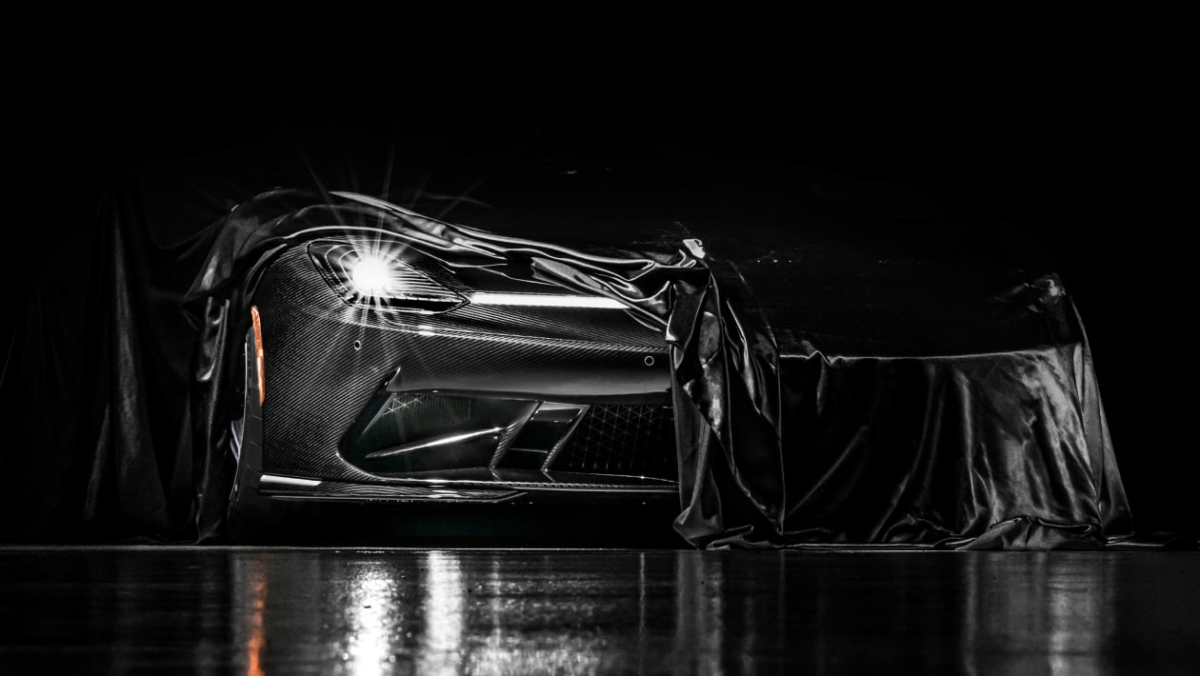 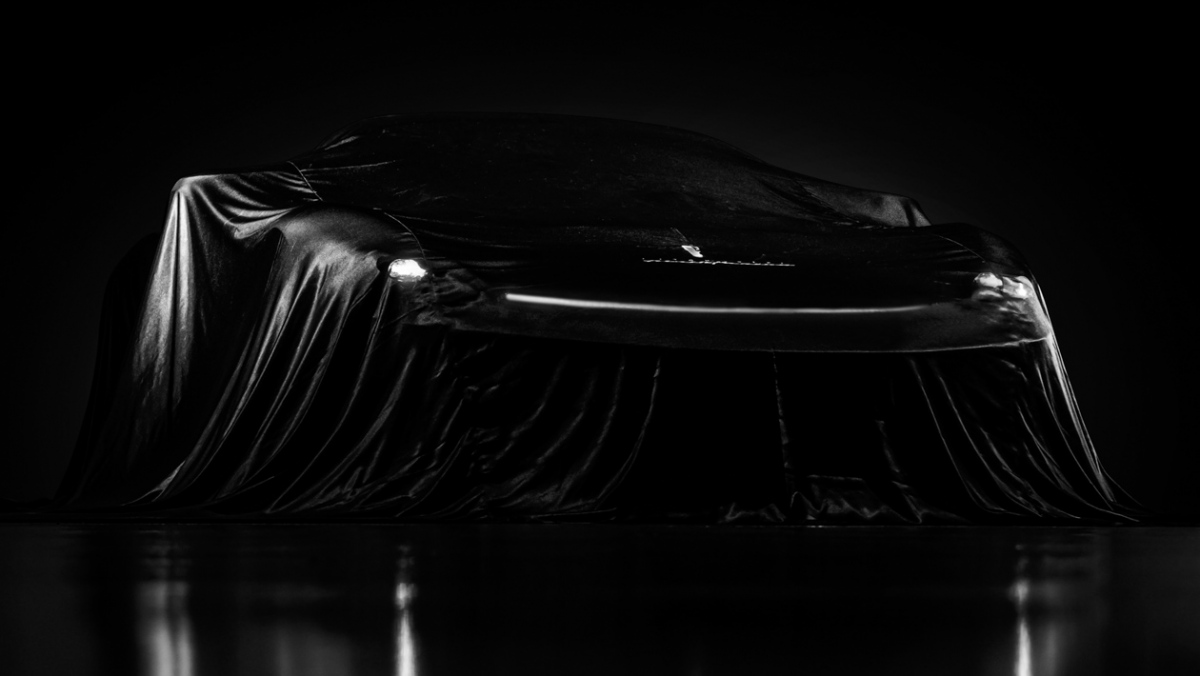 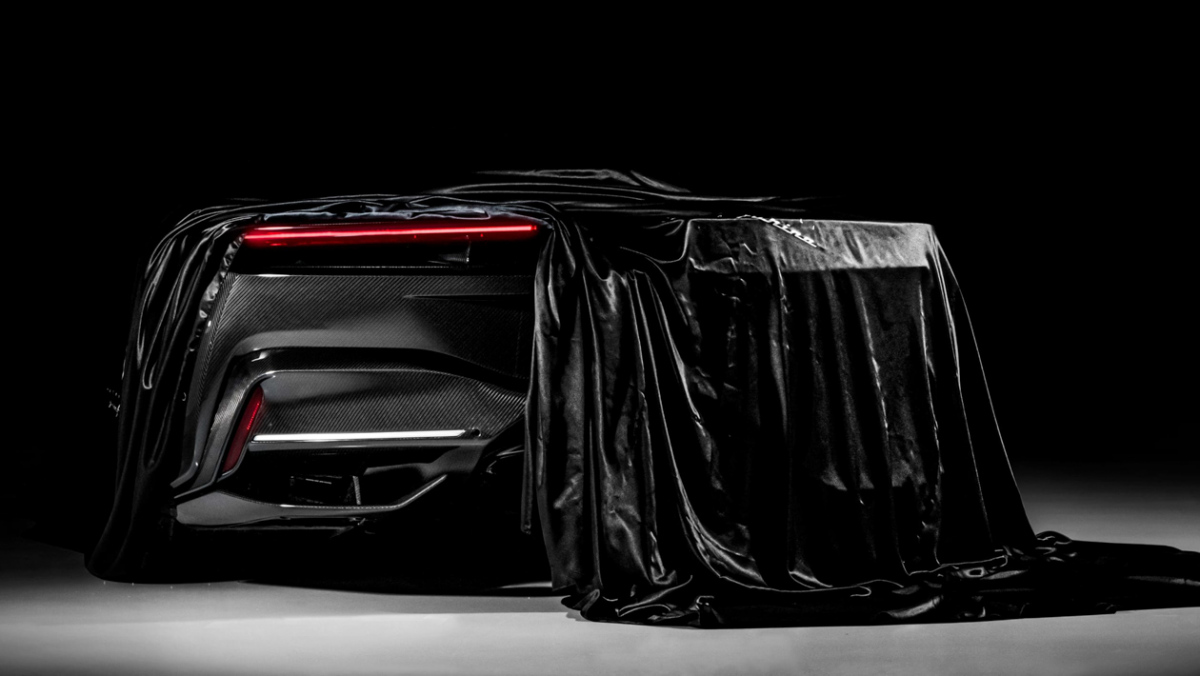 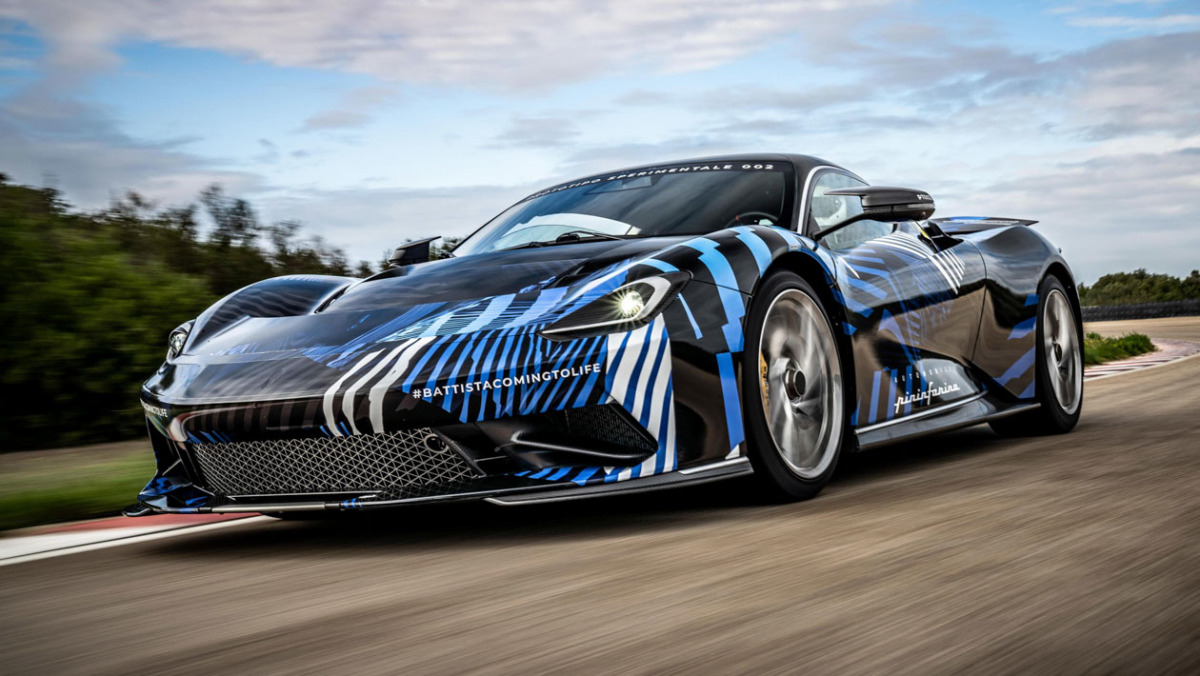 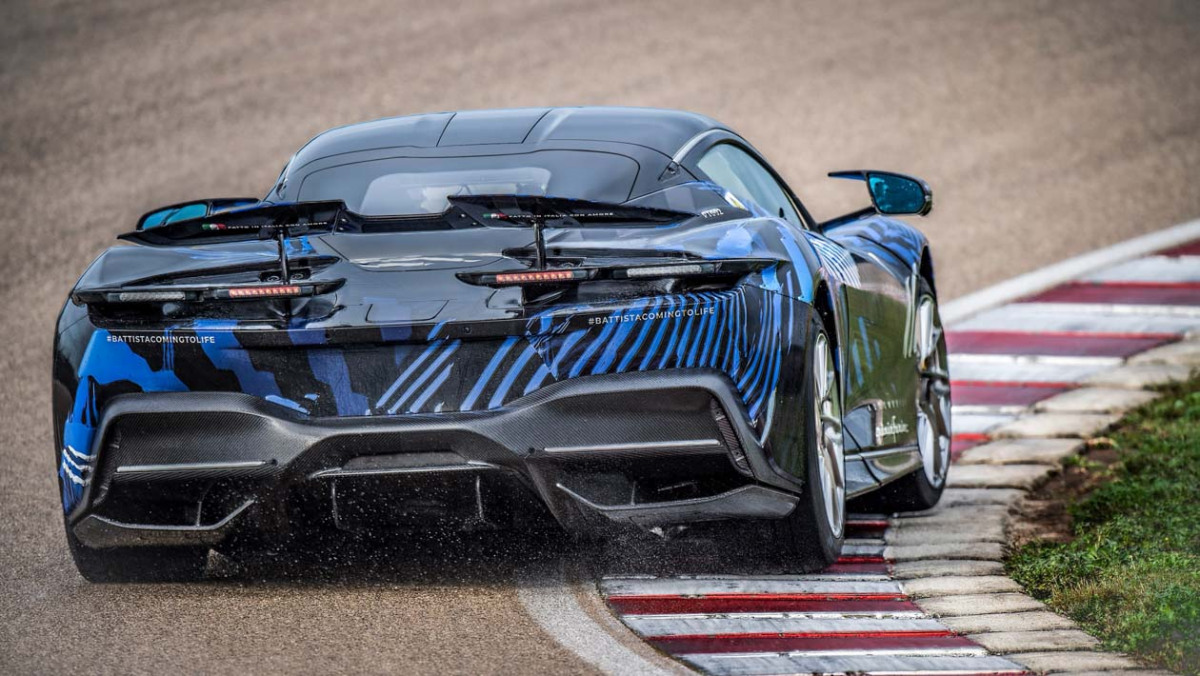 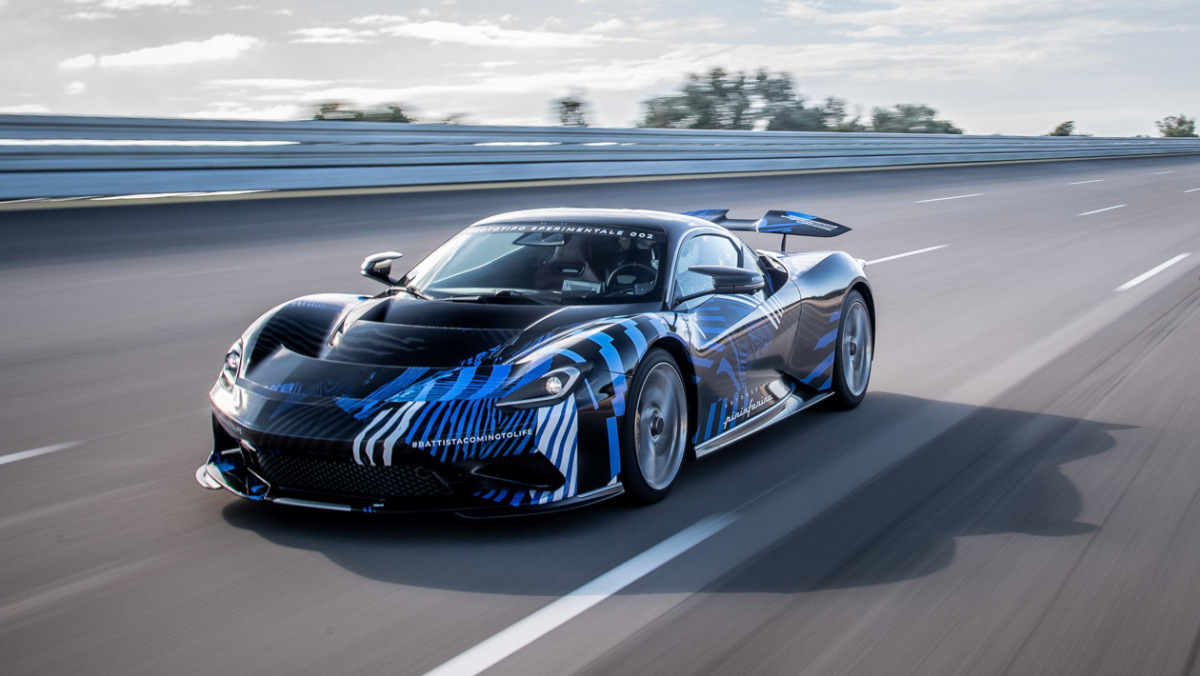 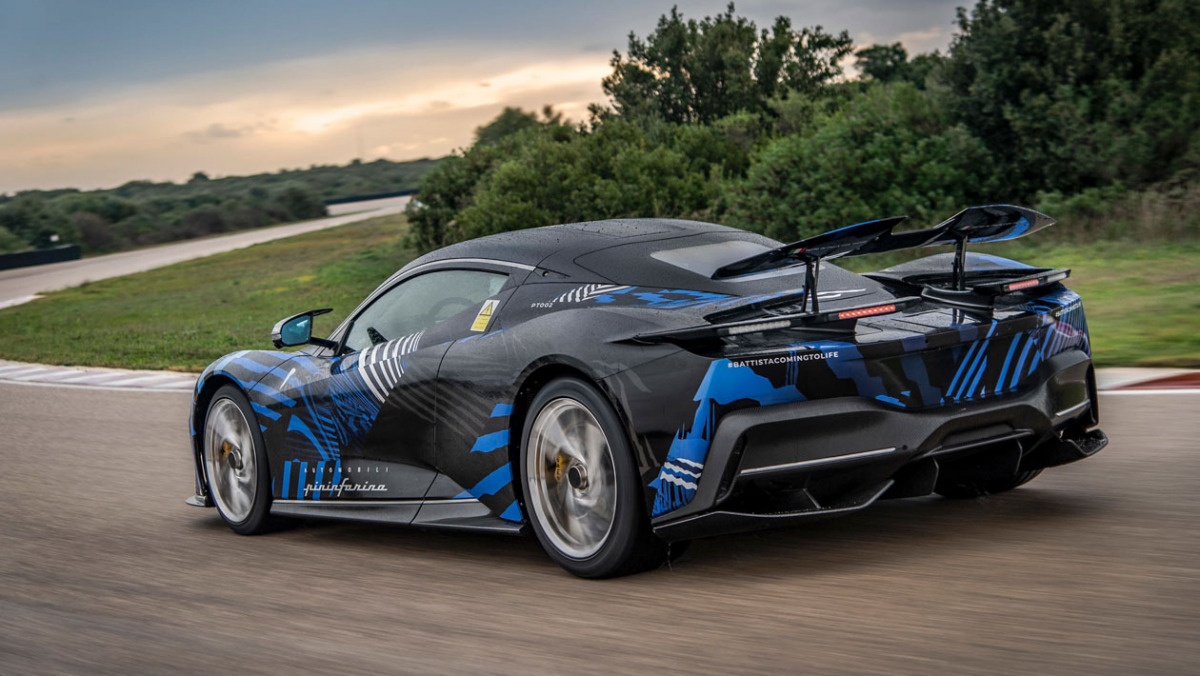 Following a round of high speed testing at Italy’s famous Nardò Technical Centre late last year, Pininfarina’s production-spec Battista hypercar will make an appearance at Pebble Beach Concours d’Elegance in the US. Though initially scheduled for delivery to customers in 2020, the first example is now set to hit the road this year – just 150 units will be produced in total, with pricing starting at around $2.8m.

Though we’ll have to wait until Monterey car week commences to see it in full, this new example features black exposed carbonfibre bodywork, contrasting chrome wheels and blue interior highlights. Per Svantesson, CEO of Automobili Pininfarina, said: ‘The premiere of the first production-specification Battista in the US marks the beginning of another significant chapter in the Automobili Pininfarina story. We are excited to showcase the beautiful and sustainable future of luxury to our clients, while celebrating more than 90 years of Pininfarina design heritage during Monterey Car Week. We look forward to our clients in the US experiencing the immense dynamic performance and personalised luxury of Battista for the first time.’

Behind the Battista’s development were some big names, with former Formula 1 driver Nick Heidfeld having put the model through its paces as a development driver, and Mercedes-AMG alumni Rene Wollmann handling the schedule.

Underneath the svelte, and typically Italian carbonfibre bodywork is not a highly strung V12, but a combination of four electric motors and a 120kWh battery pack that Automobili Pininfarina says will propel the Battista to 100kph in ‘less than two seconds’. Big claims from the new Italian manufacturer, but then it has some pretty big numbers to back it up.

To start with, the Battista is based on a carbonfibre chassis commissioned from Croatian electric hypercar manufacturer Rimac. The electric motors, capacitors and batteries are also sourced from there, but although the tech is shared, Pininfarina has done lots of work to ensure that its vision of the Battista remained pure. As a result, Pininfarina did significant work on the Battista’s overall proportions, moving the windscreen forward by 180mm, giving it a more traditional Italian mid-engined supercar silhouette.

Two electric motors are mounted to each axle, each powering a specific wheel and giving the Battista full torque vectoring capability without the need for heavy and complex differentials. As mentioned above, total power is rated at 1873bhp, with a staggering 1697lb ft of torque available at a standstill, enabling the Battista to hit 100kph in ‘under two seconds’ and 300kph in under 12 seconds. Pininfarina quotes an estimated top speed of 350kph.

If there is a single element that plays to Pininfarina’s strengths, it is of course the design, and the Battista does not disappoint in this regard. The traditional mid-engined silhouette is present and correct, and is wrapped with a considered, subtle and sophisticated body that is dripping with appeal. The most dynamic and interesting element is the massive delta-wing motif, that runs over the tight rear haunches and informs the rear styling and floating wings that also house the tail lights. This section also holds the Battista’s active rear wing, which is the only piece of active aero on the car.

The interior is dominated by a pair of touchscreens flanking the steering wheel, with designers focusing on a level of symmetry from the driver’s perspective, rather than the interior as a whole. Specific trims and finishes are able to be specified to the owner’s taste, and as suspected, this is a strictly two-seater interior.

When it comes to cost, Automobili Pininfarina is quoting a price for the Battista of around $2.8m. This price point puts it above potential rivals like the Lotus Evija and Rimac, and straight into the territory of the Bugatti Chiron; a car which not only appeals on design and performance, but heritage.

Announced at the beginning of the year, the Battista Anniversario edition will make up five of the expected 150 unit build run and differs from standard versions by a selection of subtle aesthetic changes – the underlying technical base remaining unchanged. Starting at $3.14 million, the price sees quite an increase from its initial estimate, but seems less substantial when taken in context.