The rare, hand-built Nissan GT-R50 by Italdesign has been revealed in production form 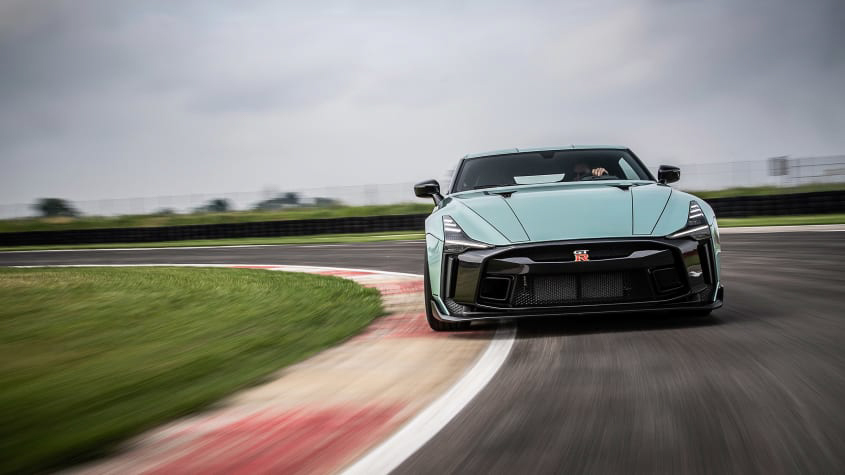 The first production-ready Nissan GT-R50 by Italdesign has been revealed, nearly two years after its debut in concept form at the 2018 Goodwood Festival of Speed. As its name suggests, the GT-R50 was designed to celebrate both 50 years of the GT-R and Italdesign themselves, with this model the first of 50 to be built.

The GT-R50’s angular aesthetic was penned at Nissan’s San Diego design studio, but the UK design office based in London took over the technical design for the prototyping phase. The GT-R50’s bespoke parts are manufactured in Italy, with final assembly taking place in Italdesign’s assembly facility near Turin, in the style of a traditional Italian carrozzeria.

The GT-R50 is built on the same underpinnings as a standard R35 GT-R, but features a more potent Nismo-tuned version of the same 3.8-litre twin-turbo V6 engine. Nissan is quoting a 710bhp power figure, achieved by replacing the standard GT-R’s turbos with two GT3 competition-spec units, along with the introduction of larger intercoolers, plus a heavy-duty crankshaft, pistons, connecting rods and bearings. To handle the extra power, Nissan has also reinforced the six-speed dual-clutch gearbox, while stronger driveshafts and differentials deliver that power to all four wheels.

Customers are able to specify their car in any colour or livery they wish, but Nissan is encouraging buyers to connect each model to a specific year of GT-R manufacture, giving each unit a unique connection to a specific moment in GT-R history. The first unit is finished in a retro silver-green colour inspired by the KPGC10 GT-R of the early 1970s, offset with contrasting black gloss B-surface inserts and subtle pinstriping up the bonnet and down the crisp carbonfibre flanks.

Such exclusivity comes at a price, though, with each car costing €990,000 (c$1.07m) plus options, taxes and any further homologation costs depending on the market it will head to. Despite the small number of slots available, not all have been accounted for yet, so you can still get your name down for one should you have the funds